Up late with singer-songwriter Anna Burch

In her own words 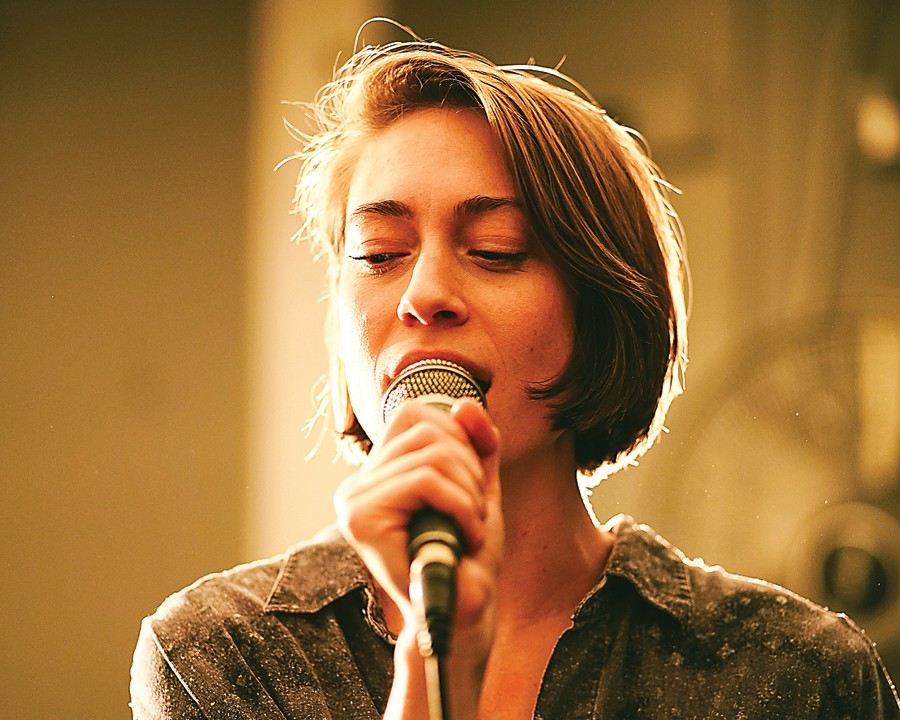 The group of guys next to me are trying to score coke — I think. It's Sunday. I'm waiting for Anna Burch, and Anna Burch is awaiting the release of her first record Quit the Curse, and we are waiting to do karaoke.

Burch orders a gin and tonic, and before we can get to the topic of the record, her time in indie folk outfit Frontier Ruckus, or what curse she is trying to quit, we quickly learn that we live on the same street, have the same landlord, and were both engaged (and then un-engaged) in our early 20s. Almost instantly, Burch solidifies herself as relatable, resilient, and totally freaked out — but ready — for what's to come.

"You know how winter is. You don't really want to leave the house," Burch says of the past few months. "I quit my last service industry job almost a year ago, and have been focusing on this project. I've been almost too sedentary. But I know I'm about to go on tour, so it's OK."

It's safe to assume that 2018 is going to be anything but stationary for Burch. She signed to Illinois-based indie label Polyvinyl (home of rock acts like Alvvays, Deerhoof, and most recently Pedro the Lion) last fall and her debut record, Quit the Curse will be released on Feb. 2. After a record release show at El Club on Feb. 9, Burch will embark on a tour as Chicago-based Ezra Furman's support act, followed by a SXSW performance in March.

"The last time I went to SXSW in 2008 I got kicked out of the VIP tent," Burch recalls. "I snuck backstage at the Lou Reed tribute show and shook hands with Moby."

For many, the next few months will serve as a proper introduction to Burch's world: Quit the Curse presents a shimmering lo-fi landscape of romantic misadventures laced with frustration, mixed signals, and unreciprocated devotion. The record calls to mind the feeling of sending a text that is both delivered and read but ignored — an insatiable need to be noticed.

Detroit singer-songwriter Anna Burch scores record deal with Polyvinyl
By Alysa Zavala-Offman
City Slang
When asked about the record's lyrics, Burch says she never writes them down and has ripped out every page of every diary she's ever written in. "It's too embarrassing," she says. "With singing, it feels ephemeral. It goes away."

"I call you up to calm me down/ But your phone's dead and you're sleepin'/ The problems they're in my head," she sings on "Yeah You Know," a song that flirts with the peak of her frustration. She closes the track with a biting conversational tone: "So, OK you're not like that/ Yeah you know where I'm at."

The word "victim" appears several times throughout the record, but without ever once painting Burch as helpless. In fact, what Burch manages to accomplish with her songwriting is nothing short of ambitious. Her too-close-to-home observations of intimacy and the way in which she portrays disappointment is more rebellious than sad. The singer says the record was purposefully sequenced, and compares its progression to the stages of grief.

"I was insecure for a long time about writing about heartbreak and relationships. I didn't want to fit into this trope of the broken woman," she says. "I kept feeling like, what do I have to even sing about? The world of the emotions is all there really is. I think writing the record I had to get over that feeling. I haven't looked back since."

She leans into me, gazing above my shoulder. "Actually, the person who most of the album is about is at this bar right now. But that's so Detroit right?" she laughs. "Why does everything here feel so small? I really don't think I could have written this record without Detroit — it writes itself."

Burch reminds me she isn't from Detroit. She grew up in St. Joseph — a small port town on the west side of the state that is referred to as "the Riviera of the Midwest." She says it makes her feel "icky" to make it a part of her narrative, even though it's a detail most people latch on to.

Displacement and the role of feeling like "the new girl" are recurring themes on Quit the Curse. "I know that I'm very new in town/ And I'm so scared my past will run me down/ For good," Burch sings on "Belle Isle," a summery song about being "lovesick and sunburned" and the fickle spark between her and her new lover.

After attending MSU, Burch moved to Chicago where she studied film and would eventually receive her masters in humanities from the University of Chicago. Though she concluded that a future in academia would likely be more competitive and as intense as trying to make it as a woman in indie rock, she's thankful for the discipline she acquired while in grad school.

Chicago, for Burch, was more than higher education. She confesses that her romantic life while in the windy city was "horrific" and that she had "never felt more alone." Though Curse was recorded in various Chicago apartments, much of the source material was gathered during the first nine months of Burch's return to Detroit in 2014 — a move that was intended to serve as a clean slate.

"I think in some ways people have to be a little bit more accountable, or at least expectant that everything is on the table in Detroit," she explains. "But I realized I can't just move somewhere new, I can't just decide that this isn't for me, and be happy. When I moved to Detroit, shit got messy again."

Related Anna Burch is "Asking 4 a Friend" on new single

Anna Burch is "Asking 4 a Friend" on new single
By Jerilyn Jordan
City Slang
Throughout her 20s, Burch sung harmony in Frontier Ruckus, the Michigan indie folk outfit led by singer-songwriter Matthew Milia, whose midwestern neurosis garnered international attention for 2017's Enter the Kingdom. Upon returning to Detroit, she joined Failed Flowers, a project she co-fronted with Saturday Looks Good to Me frontman Fred Thomas. But her friends encouraged her to go solo. According to Polyvinyl, a Chicago friend, Paul Cherry, fleshed out a full-band sound from her cellphone-recorded demos. And Thomas, who was signed to Polyvinyl through Saturday Looks Good to Me, sent the demos to the label along with a simple note: "This is not a drill. You need to hear this."

Burch, now 30 years old, is choosing to rewrite her resume, and admits that she doesn't want to rely on the success of Ruckus.

"I think not really having a creative stake in that project made it easy to leave," Burch says. "No one really wanted to talk to me. They wanted to take my picture sometimes. I can't erase any of that and I wouldn't want to. I feel being an accessory character and being treated as such for a very long time — it feels good to step outside of that. A weight has been lifted. I think Angel Olsen still gets asked about Bonnie 'Prince' Billy, you know? When does it go away?"

Burch seems happy to go her own way. "I have to say being a girl in the band is much different than being the girl that is the band," she says. 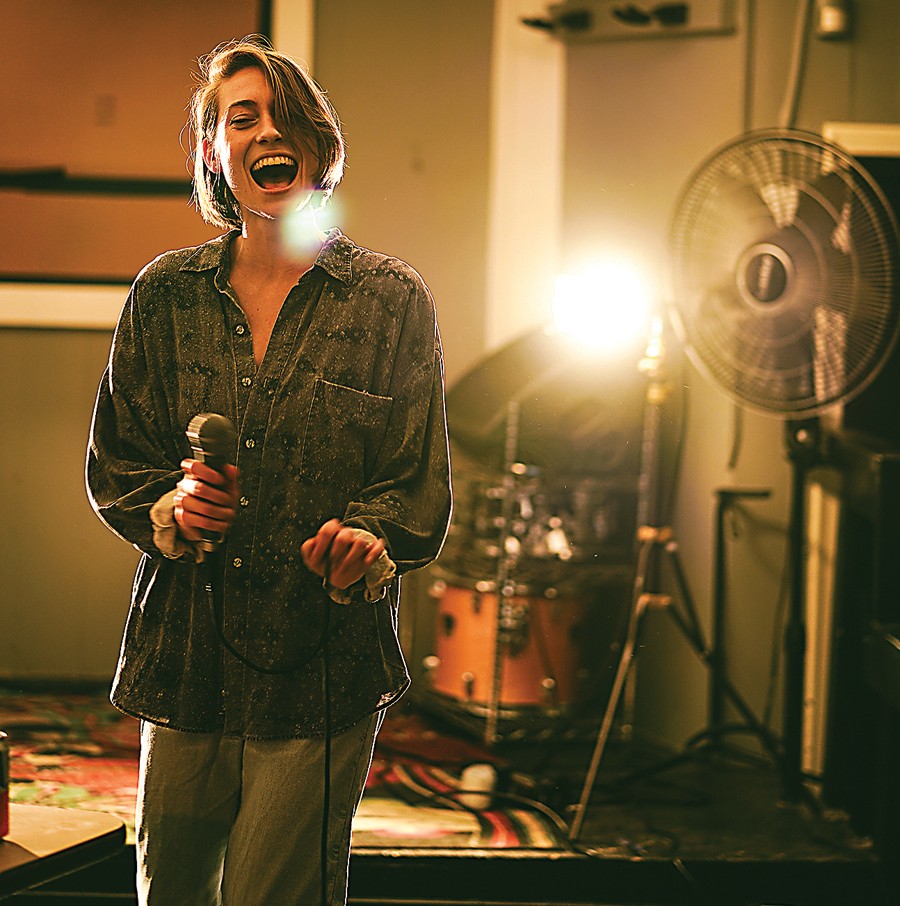 When we arrive at Trixie's for karaoke we are greeted by familiar faces: a sea of ex-boyfriends, current bandmates, casual acquaintances, and people whose names we frequently mix up in conversation. Burch heads for the shot glass filled with slips of paper and scrawls Sheryl Crow's "If It Makes You Happy" as her first song selection.

"My range is sort of limited," she laughs. "So, sometimes this song can be a disaster. The low register is my sweet spot."

Her rendition of the alternative '90s heartbreak classic is far from a disaster. Even when singing someone else's words, Burch is downright enchanting.

"Alanis Morissette's Jagged Little Pill was the first CD I bought. But my first concert was the Spice Girls," Burch laughs. "I think I always wanted to be Baby Spice but always ended up being more of a Sporty," she says, filling out another song slip, this time for "Superstar" by the Carpenters.

Burch disappears to the bar with Holly Johnson of the band Double Winter, embracing each other in between PBR sips and bursts of laughter. My name is called and I am forced to sing a regrettable version of "Underneath Your Clothes" by Shakira in a Shakira voice as my register is low too, but without the piercing purity of Burch's. I've accepted my fate as a comical singer while shaking my hips violently, hoping my theatrics distract from my vocal missteps. Burch does me a solid and claps enthusiastically from her bar stool.

Bands to watch 2017: Anna Burch
By Alysa Zavala-Offman
Local Music
It's nearing 2:30 a.m. and someone is bitching about how 9/11 was an inside job. Half of the bar's occupants have yet to close out their tabs and my version of Aerosmith's "I Don't Want to Miss a Thing" did not go over as well as my Shakira selection. Soon, Burch is singing "Linger" by the Cranberries. This is both sad and fitting at this hour, now technically Monday, two weeks after the Cranberries' frontwoman Dolores O'Riordan died.

Burch stumbles through the second verse. "I always fuck up that part," she says, laughing and running her hand through her hair. I cannot remember the last time I was up this late but as I watch Burch step off stage with a shrug, I can see that she too is trying to appear ready for anything and not the least bit tired.

Though it is clear that she is learning to navigate a new world, one that is entirely of her own design and errs on the side of not taking itself too seriously, one thing is undeniably true of Anna Burch — no matter what is hiding beneath the surface, she smiles a lot.