Watching democracy die, part 3: Can a post-Trump America pull itself back from the brink? 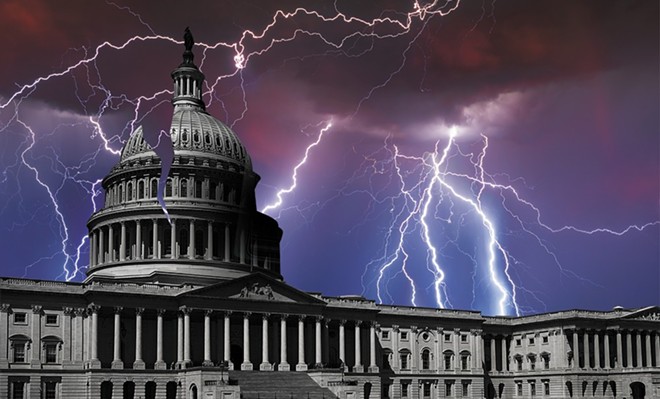 In How Democracies Die, political scientists Steven Levitsky and Daniel Ziblatt argue that there are three strategies would-be authoritarians — from Juan Peron in Argentina, to Hugo Chavez in Venezuela, to Silvia Berlusconi in Italy, to Vladimir Putin in Russia — have employed in their efforts to consolidate power: capturing the referees, sidelining key players, and changing the rules.

In his first year as president, Donald Trump attempted all three.

Watching democracy die:
• Part 1: The American experiment is more fragile than you think, and it’s not just about Trump
• Part 2: When the ends justify the means, anything goes
• Part 3: Can a post-Trump America pull itself back from the brink?
• Part 4: If we don’t change the system, the system is going to break

Trump tried to capture the referees — purging independent agencies and disloyal officials — by firing James Comey, attacking judges who ruled against him, shaming Jeff Sessions over his Russia recusal, and so on. He sought to sideline key players in the democratic process through attacks on the press, against media owners, and an attempt — overturned by federal courts — to deny sanctuary cities federal funds. And he tried to change the rules by urging the Senate to eliminate the filibuster (it did so for Supreme Court confirmations) and creating a Commission on Electoral Integrity, a transparent attempt to crack down on the phantom problem on "fraud" through voter ID laws and other methods that suppress minority turnout.

Trump talked more than he acted, Levitsky and Ziblatt write. But his instincts were clear; his ambitions, however, were checked by his unpopularity, ineptitude, and the unwillingness of key party elders to play along.

Democracy's fate, they continue, rests on three factors: the behavior of Republican leaders, public opinion, and the potential for crisis.

In other words, if Republican leaders continued acting as a restraint, if Trump's polling remained weak, and if no incident occurred that facilitated a power grab, our democracy might emerge from Trump's presidency with its norms somewhat intact.

The book was published in January 2018. What's happened since has been anything but reassuring.

Trump's sugar-high economy hasn't quite made him popular, but a Washington Post poll last week had him at 47 percent among registered voters, his highest yet. And if you're counting on the GOP to keep him in check, sorry. John McCain is dead. Those who once, even meekly, dared stand up to Trump and his mob — Lindsey Graham, Marco Rubio, Thom Tillis — have been reduced to spineless sycophants or forced into exile, like Michigan's Justin Amash, who recently left the party.

Even Trump's brazenly racist attack on four members of Congress this weekend (telling Rashida Tlaib, Alexandria Ocasio-Cortez, Ayanna Pressley, and Ilhan Omar to “go back” to their countries, even though all of them are American citizens) was met with hardly a word of resistance from the thoroughly cowed Republican Party.

The GOP is Trump's party now: white, nativist, theocratic, revanchist, grievance-oriented, authoritarian, shamelessly hypocritical, proudly unserious. And because Trump knows his base would indeed not desert him should he shoot a man on Fifth Avenue, he's increasingly blatant in his contempt for democratic norms: Jeff Sessions is gone, replaced by yes-man William Barr. The White House has defied multiple congressional subpoenas and ordered Trump's underlings to refuse to cooperate with investigations. Trump circumvented Congress to try to build a southern border wall, ripped migrant families apart, and threw asylum seekers into hellacious detention camps. He even openly toyed with straight-up flouting a Supreme Court ruling to place a citizenship question on the Census.

In a healthier democracy, there would be a bipartisan consensus that Trump needed to be impeached and removed from office. But this isn't a healthy democracy. One American party is broken. The other doesn't know how to handle it.

How Democracies Die posits three outcomes to our present dilemma. The first two the authors deem unlikely: Trump (and Trumpism) is totally defeated and Republicans learn from the error of their ways, or Trump and his white nationalist allies form a viable coalition and the future looks like a mashup of The Handmaid's Tale and Man in the High Castle. The third and most probable scenario, Levitsky and Ziblatt write, is what's taken place in North Carolina (where I live) over the last decade: all-out, polarized, zero-sum warfare, where anything and everything is fair game — Republicans vs. Democrats, white vs. nonwhite, urban vs. rural.

I could write a lot on North Carolina politics, but it suffices to say this is not an optimal outcome. A quick version of the story goes like this: Funded by wealthy extremists, Republicans won in 2010 and quickly gerrymandered the state to give themselves an overwhelming majority. They used this majority not just to pass far-right social and economic legislation but also to block cities' progressive measures and try to impede minority voting. When voters elected a Democratic governor, Republicans rushed into a lame-duck session to strip him of powers. They then overrode nearly two-dozen of his vetoes using a supermajority they won through a racial gerrymander that had already been declared unconstitutional.

That's just the beginning of politics without guardrails. The problem is how to arrest it.

Here, having diagnosed the disease, Levitsky and Ziblatt struggle with the cure. What they arrive at is something like a Joe Biden theory of politics: Republicans may have lost their moorings, but Democrats shouldn't follow suit. They should play by the rules, adhering to norms. They should try to defeat Trump, of course — that's imperative — but they shouldn't impeach him without a bipartisan consensus. They shouldn't try to change the rules to overcome obstruction. They should seek compromise, but without compromising their commitment to civil rights — which was, you'll recall, the issue that ripped asunder the 20th century's partisan truce in the first place.

But, to my mind, this prescription presumes that at least some Republicans would act in good faith when evidence of Trump's criminality and malfeasance emerged. It did; they didn't. It presumes that the system allows a fair fight, when the makeup of the Electoral College and the U.S. Senate — combined with the coming free-for-all of partisan gerrymandering, now blessed by the U.S. Supreme Court — gives white conservatives an entrenched (and growing) advantage. And it presumes that by extending olive branches, you can make peace with those who've declared total war on you.

If anything, this strikes me as a prescription for getting your ass kicked.

So what does a real solution look like — if one even exists? I'll tackle that in the fourth (and final — honest) part of this goddamn interminable series next week.

Related Watching democracy die, part 4: If we don’t change the system, the system is going to break

Watching democracy die, part 4: If we don’t change the system, the system is going to break
By Jeffrey C. Billman
Informed Dissent