We Bought a Zoo

Zoo-lander - It even coaxed a tear from our jaundiced critic! 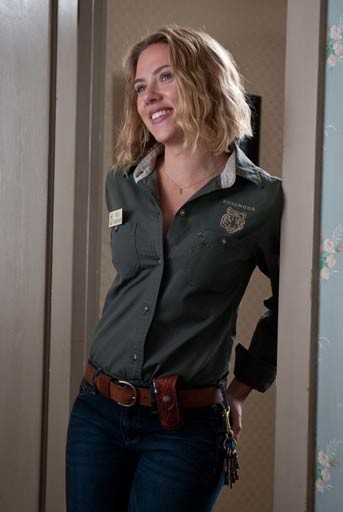 We Bought a Zoo

At a recent screening, one of my colleagues was surprised to discover how easily I tear up at films — hardly what some expect from a hardened film critic. But being vulnerable to having your emotional buttons pushed doesn't necessarily mean you can't appreciate (or resent) the manner in which you are being manipulated. So, it's no achievement to say Cameron Crowe's low-key, family-friendly tearjerker got to me. Given its kids-grieving, dead-mom subject matter, getting me to squeeze out a few tears is low-hanging fruit.

Which isn't to say We Bought a Zoo didn't have potential. Crowe has a sincere, unapologetically sentimental approach that knows when to indulge and when to keep it human. Films like Jerry McGuire and Say Anything deserved the accolades. Unfortunately, Crowe, directing his first film in six years after a pair of flops (Vanilla Sky, Elizabethtown), is saddled with a script predominantly penned by screenwriter Aline Brosh McKenna, who has a long résumé of aggressively bland and sloppily contrived comedies (27 Dresses, I Don't Know How She Does It, Laws of Attraction). Uninspired crap, really. And her cartoonishly obvious writing really shines through here with its cardboard characters, on-the-nose dialogue and unearned emotions.

Loosely based on a true story, thrill-seeking journalist Benjamin Mee (Matt Damon) struggles to cope with the death of his life and care for his two grieving kids — troubled teenage Dylan (Colin Ford) and cutie-pie seven-year-old Rosie (Maggie Elizabeth Jones). Tragedy's toll inspires him to quit his job and move to the perfect country home. But there's a catch: It's really a zoo — the Rosemoor Animal Park. And the owner must assume responsibility for the facilities and its nearly 200 animals. Despite warnings from his older brother Duncan (Thomas Haden Church), Ben decides it's just what his wounded family needs (because, you know, Rosie adores the peacocks) and jumps right in. But see, Ben didn't just buy a zoo, he bought the family that comes with it — an eclectic staff that lives on site. Of course, it helps that the head veterinarian is the fetching Kelly (Scarlett Johansson).

It doesn't help that McKenna's characters practically tell the audience that their desire to rehabilitate the broken-down zoo is a metaphor for their own need to heal, but Crowe and Damon do their best to keep things gentle and open-hearted. How much you like what they're doing depends on how much of a sap you are. From attending to a depressed grizzly bear to allowing an aging tiger to die with dignity to Ben's efforts to recover from the loss of his wife, We Bought a Zoo may frequently be graceless in the way it tugs on your heartstrings but there's an undeniable sweetness on display. Damon, in particular, breathes life into his role, and turns a potentially maudlin recounting of the first time he met his wife into something quite moving. Johansson surprises as well, taking an underdeveloped character and creating something approaching lifelike. It reminds you of how appealing an actress she can be.

Unfortunately, the rest of the cast is a mix of mugging and half-baked character tics rather than three-dimensional personalities.

Though audiences will probably respond favorably to We Bought a Zoo's inherent decency and kindness, the film doesn't come close to redeeming Crowe as an artist. Though there is a charming cynicism-free vision to his celebration of new beginnings, he still falls back on formulaic plotting, clunky emotional confrontations and blaringly obvious boomer anthems in his soundtrack — Cat Stevens' "Don't Be Shy" backs the initial courtship for two teens, while Dylan's "I Think It's Going to Rain Today" accompanies ... wait for it ... an untimely rainstorm.

That said, We Bought a Zoo is the kind of PG movie that gives you and your family a great big holiday hug — sweet enough to appeal to visiting grandparents and tykes, but not so much that you rot your teeth. —Jeff Meyers