We did not let science stand in the way 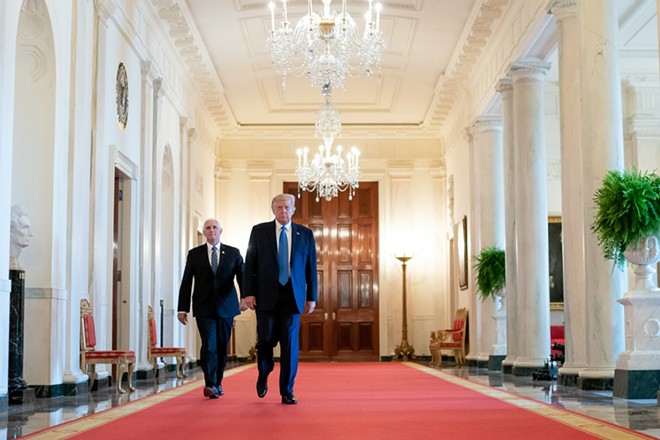 On Thursday morning, the Trump administration killed Wesley Ira Purkey, a 68-year-old with dementia, two days after fatally poisoning Daniel Lewis Lee, who proclaimed his innocence to the last.

These first federal executions since 2003 come despite the death penalty falling out of favor across the country. Including Lee and Purkey, only nine men have been executed this year. In 2014, President Obama placed a moratorium on federal executions, ostensibly to review issues related to lethal injection drugs.

Last July, soon after becoming attorney general, William Barr declared that review over and revved up the federal government’s machinery of death, just in time for the election. Line ’em up, put ’em down.

But the death penalty’s revival didn’t spark a culture-war skirmish or rally social conservatives to President Trump’s banner. To the degree they were noticed, the executions were met with a shrug. Killing Lee and Purkey didn’t sate a national bloodlust. If anything, their deaths underlined capital punishment’s capricious, pointless, politicized nature.

Do you feel safer today than you did on Monday?


Why should you? This hellscape of a year has been haunted by the specters of death and violence and uncertainty, all of it capricious and politicized.

The murder of George Floyd brought into stark relief the systemic racism inherent in our criminal justice system. Law enforcement’s violent efforts to quash the Black Lives Matter protests that followed only proved the point.

The economy lies in ruins, with more than 30 million on unemployment, 5.4 million without health insurance, and, to borrow a phrase, the light at the end of the tunnel might be an oncoming train.

And, of course, almost 140,000 Americans have died from COVID-19, with a new wave of deaths in the offing, while the ruling political party lives in what can charitably be called denial and the rest of us wonder when or if life will return to anything resembling normal.

Just as predictably, the spike of infections began soon after states began reopening in late April and May. States that were especially gung-ho saw massive increases. Florida, for instance, has seen days with more than 15,000 new cases, far worse than anything New York saw this spring. 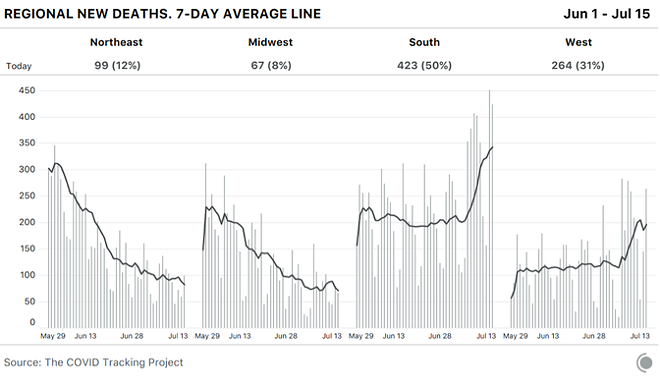 No country — besides Iran — has gone backward like we have. No other country prematurely declared victory and then watched ICUs fill up again.

Relatedly, no other country’s leadership has so stubbornly downplayed the scope and severity of the virus in its zeal to prop up the economy for political purposes — and had so many partisans eagerly follow it over the cliff.

To the world, this a uniquely American failure, which is both true and not quite correct.

More precisely, this is a Republican failure, the failure of a governing party that gave up the pretense of governing long before reaching its apotheosis of revanchist know-nothingness in Donald Trump.

There’s some good news, if you can call it that: While the president, hellbent on projecting normalcy at all costs, insists on forcing children and teachers into COVID camps this fall — recklessness echoed by Florida governor Ron DeSantis — and plays hide-the-ball with crucial coronavirus data, some Republican leaders have finally gotten religion on the most basic realities of this pandemic.

The governor of Arizona backed down on his earlier efforts to block local face-covering mandates. The governor of Texas went further and forced residents in most counties to wear masks. (And like Florida, Texas re-closed standalone bars amid rising infections.) On Wednesday, Alabama — Alabama! — governor Kay Ivey issued a statewide mask order, saying that while she’d rather not force people to do the right thing, they weren’t doing it on their own.

Better late than never, I suppose.

Of course, too many are still stuck on never.

Others think never is something to aim toward.

It was, he explained, a matter of “personal responsibility.”

Besides, Forest elaborated, masks don’t actually protect against coronaviruses, basing his assertion on “multiple comprehensive studies at the deepest level held to scientific standards in controlled environments.” (That’s not true. Not at all.)

Forest (obviously) opposes the state’s mask mandate. He also believes — he really said this out loud — the moderate, milquetoast Democratic governor’s cautious reopening strategy is basically the second coming of the Reign of Terror.


There’s some more good news, if you can call it that: Forest is getting his clock cleaned. For reasons you’ve likely discerned, a lot of folks think he’s a few clowns short of a circus. More importantly, Roy Cooper, like other governors who took the pandemic seriously, has solid approval ratings. That’s a lesson Trump still hasn’t learned.

Be that as it may, let’s do a quick thought exercise. Imagine the pandemic arrived next year, and Republicans had ridden a growing economy to victory this November. Now Governor Forest is making decisions about shutting down businesses (nope) and closing schools (definitely nope) and requiring masks (he read on the internet that it’s a hoax, man).

How many people would die who didn’t have to?

There’s no way to know precisely. But you can venture an educated guess. Just take a look around.

As of Thursday, a little over 1,600 people in North Carolina had died from COVID. The most recent modeling from the Institute for Health Metrics and Evaluation projects that the state is on track for about 2,300 deaths by November 1; if the state keeps its mask mandate in place, that projection declines to just under 2,000.

So at least 300 deaths. But that’s just the beginning.

In Georgia, whose approach Forest is keen to emulate, more than 3,100 people have perished, almost twice as many per capita as North Carolina, and climbing to more than 4,700. (According to the IHME, a mask mandate could save 900 lives through November.)

Using Georgia as a model, you can safely double North Carolina’s total.

Florida, another laissez-faire state, will soon top 5,000 deaths — and at the rate at which it’s adding cases, that number will soar. The IHME, in fact, thinks Florida is going to have a very rough summer, nearing 20,000 fatalities by November.

Not long ago, the National Review was telling the media that it owed DeSantis an apology for criticizing his reopening strategy, a piece that, well, hasn’t exactly held up. Now his state has become the worst-case scenario.

Throw all that in the blender, and it’s fair to say that under Forest, North Carolina might have seen something like 2,000–4,000 more COVID deaths in a year than it will under Cooper.

You can’t help but wonder which fathers and grandmothers would still be alive had Democrat Andrew Gillum won 33,000 more votes in Florida in 2018, or Stacey Abrams not fallen victim to Kemp’s shenanigans in Georgia.

By the way, a universal mask mandate in Florida would save more than 7,000 lives, the IHME projects. DeSantis hasn’t issued one.

Kayleigh McEnany, the White House’s press secretary, said something inadvertently revealing Thursday: “When [the president] says open [schools], he means open and full, kids being able to attend each and every day at their school. The science should not stand in the way of this.”

The emphasis is mine, but that’s a real quote. (She went on to “clarify” that “the science” supported reopening schools, but we’ll skip the fantasy portion of today’s briefing.) Watch for yourself.

Kayleigh McEnany: Pres. Trump wants schools to open, "and when he says open, he means open and full, kids being able to attend each and every day at their school. The science should not stand in the way of this." https://t.co/USdmss0Ygu pic.twitter.com/XTowM3TKIx


“The science should not stand in the way.”

Is there not a better encapsulation of Trump’s approach to the pandemic? (Or, for that matter, of his approach to climate change, or guns, or police reform, or health care, or anything else?)

People will die by the thousands because the science should not stand in the way of kids returning to school, of businesses reopening en masse, of people crowding in bars, of the administration telling us that the virus is something we’ll just have to live (and die) with.

Like the men being killed in a federal prison in Indiana, these deaths are no less capricious, no less pointless — and no less political.


Get Informed Dissent delivered to your inbox: billman.substack.com.