Welcome to the Dyke House 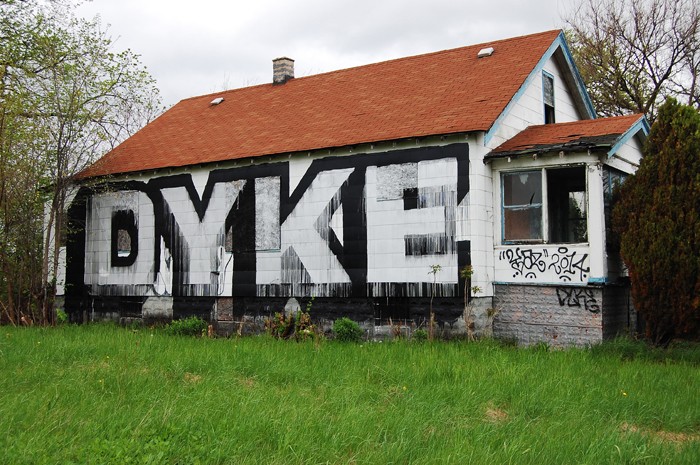 This one-and-a-half-story bungalow at 17521 Russell St. (though the door is marked 19251 in black marker) has caused quite a stir, having been tagged by a street artist who presumably goes by the handle “Dyke.” The giant block letters take up the entire side of the house. It’s obvious that, in order to paint the massive tag, the overgrown shrubbery had to be cut away — which also makes Dyke’s tag prominent for northbound motorists on I-75. We at the ASS (that’s Abandoned Structure Squad) know little about the artist, but the tag can be seen on countless abandoned homes in this Highland Park neighborhood.

If you want a secluded home, this may be the house for you. It certainly doesn’t seem to have many visitors. A newspaper on the front stoop, for instance, was dated Nov. 29, 2013. The front door was padlocked with surprisingly few pry marks on the jamb. The front yard won’t be winning any beautification awards, as the grass is knee-high and the shrubs have grown high enough to obscure the first-floor windows. Christmas lights remain woven through one bush’s branches, left by the last inhabitants to decorate for the holidays. At one point, the quaint little house was obviously cared for by a tasteful owner, with its white shingles and royal blue trim. Now, the only occupants are the wasps that inhabit the mailbox. The flower box below the window of the front porch holds fake sun-bleached flowers, oddly enough, planted in real dirt.

Though the house is only 946 square feet, it sits on a 3,746-square foot lot, providing plenty of room for a dog to play. Judging by the scummy dog bowl filled with rainwater left by the back door, the previous owner was an animal lover. Just to the left of the back door, a DirecTV dish remains bolted to the wall, with cut cables dangling from it. Entering the house from the back can be a little tricky. The doorway is about 4 feet above ground and there are no stairs. The lock on the rusted bars intended to secure the entrance has been broken, allowing easy access to squatters and scrappers since the back door is nowhere to be found.

In the back of the house, the first room would make a charming bedroom for a child. The hot-pink paint job and Sesame Street wall decals really give a pleasant vibe. The bathroom features a timeless decor, painted cherry red with checkerboard floor tiles. You can hear the soothing sounds of I-75 and ambling freight trains all the way in the front living room, which is colored pond-scum green. Since there’s no trace of a kitchen in the house, knowledge of good take-out joints is a must.

To say the backyard is overgrown would be a compliment. Mangled lawn furniture and broken glass lie scattered in the grass. A detached garage sits at the back of the lot — with no driveway anywhere in sight. Every window is busted out, and the rear garage door is completely missing. Piles of discarded sheets and blankets make you wonder if vagrants have sought shelter here.

According to Wayne County property tax records, the last party to pay taxes on the property was a nonprofit called Young Men in Transition, but it looks like the property was subject to foreclosure in 2008. In 2013, the status was still unconfirmed. Perhaps a buyer might snatch it up as an investment property, since one side is clearly visible to drivers on the freeway, which raises all sorts of possibilities for outdoor advertising.