We’ll eat on the road

What’s behind a new Montana state law that would legalize the consumption of accidental roadkill? 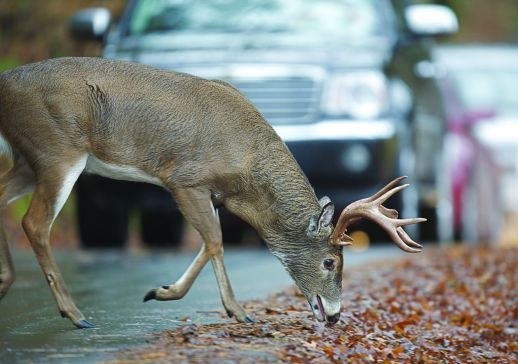 The Montana state Legislature recently passed a bill legalizing the salvage, consumption or donation to charity of animals hit and killed by cars — aka roadkill. The law applies to deer, elk, antelope and moose, and puts the state in the company of Alaska, Illinois, Wisconsin, New York, Florida and West Virginia (though not Michigan — yet) in condoning the consumption of vehicle-tenderized meat. With deer populations at all-time highs in many regions — and car vs. deer collisions skyrocketing as well — it’s possible other states will follow suit with roadkill bills of their own.

Salvaging roadkill makes sense for several reasons. Wild game is some of the healthiest meat there is, and it’s a shame to let it rot by the road. Eating roadkill could save families a lot of money they would otherwise have spent on meat, which might have something to do with why the beef industry lobbied against the bill, citing food-safety concerns.

In addition to feeding people, roadkill salvage would protect the lives of eagles, ravens, coyotes and other scavengers that typically feast on roadside carcasses, and are sometimes killed themselves in the process. And the bill stands to save taxpayer dollars, as every carcass removed by a meat salvager is one fewer that road crews have to deal with — which typically entails hauling it to the dump for composting.

While the beef industry’s food-safety concerns may be motivated by the bottom line, there are, in fact, health issues to consider regarding roadkill consumption. Additionally, there are ethical issues to contend with, such as the possibility that some idiot might intentionally hit an animal as an easy way to harvest meat or collect antlers.

The way the law is written, a law-enforcement official must issue a permit to would-be roadkill eaters before a carcass can be legally removed from the scene. And the law specifies that the collision must be accidental. But it’s not out of the question — or unprecedented — that motorists might decide not to hit the brakes, especially if the animal has an impressive set of antlers. It’s amazing how irrational some people can act when a nice rack is involved. But such behavior, while punishable by law, is also self-limiting by the survival instinct. Anyone who’s crashed into a deer knows how fun that can be.

As far as the meat itself is concerned, the deer you hit yourself is more likely to be salvageable, while eating a carcass you happen upon raises many unanswerable questions. The most important of these are when and how did the animal die?

The less you know about the answers, the weaker your ability to evaluate whether the meat is worth dealing with. This is especially true in warmer seasons and warmer regions, which is why I was surprised to learn that Florida and West Virginia allow the harvest of roadkill; heat is one of the main enemies of meat quality.

As a hunter, not only do I want my meat to be safe, I want it to be perfect. Putting perfect meat in the freezer is a bit like pitching a perfect game in baseball. In baseball, if just one opposing player gets on base, the magic is lost; with meat there is a long sequence of steps that must be completed correctly to ensure top quality. Whether the meat is acquired via hunting or car crash, the forces that create bad flavor and spoilage are virtually identical.

Despite my earlier joke about vehicle-tenderized meat, the part of the animal that took the brunt of the collision is likely to be ruined — resembling a wound more than something you want to eat. Spoilage and bad flavor can emanate throughout the body from the point of contact, especially in the heat. But heat spoilage can happen even in mild weather, because a dead animal takes a long time to cool down. A hunter wants to open the body cavity as soon as possible to let the body heat escape, and the same would be true for roadkill.

Until you open it up, you have no idea what it looks like inside. It could be a total mess, with exploded guts and traumatized meat. Maybe the motorist that hit the deer managed to just run over the deer’s head, but it’s likely there will be some damaged meat. If the funk has not spread, you can probably cut away the bruised part. And if you’re too late, a trained nose will alert you of that when you open it up.

Montana state Sen. Kendall Van Dyk (D-Billings) used a similar gauge to express his skepticism of the roadkill bill. “Despite its good intention, it doesn’t pass the smell test for me,” he told the AP, citing food safety concerns.

I find it funny that the supposedly freedom-loving Republicans want to deny us a right that’s freely enjoyed by ravens, coyotes and other scavengers — especially when preventing waste could be considered a conservative approach. But in this case, it seems like the Dems who are in favor of freedom — the freedom to be conservative, no less. “It really is a sin to waste a good meat,” state Sen. Larry Jent (D-Bozeman) told the AP.

If safety concerns are truly motivating the opposition to the roadkill bill, it’s the meat itself that needs to pass the sniff test. And rather than make people drive by good meat so they can purchase their packaged pink slime at the store, it makes sense to educate the members of the public on how to gauge meat quality as best they can, and allow the judicious eating of roadkill. It’s not a new idea, but is an idea whose time has come.

Click here for more information about your next roadside meal.

Ari LeVaux covers food issues in his syndicated column, Flash in the Pan. Send comments to him via letters@metrotimes.com.