What Brother Ali did on his music vacation

Just moving the dirt around 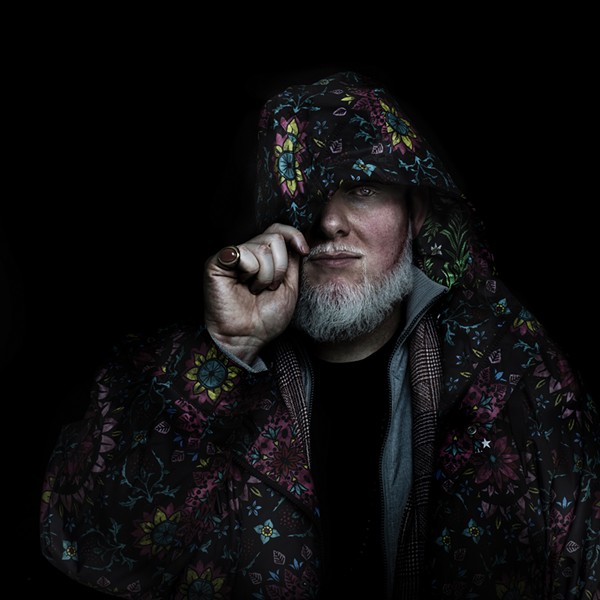 When did our nation become so self-assured and quick to judgment that we'd turn on our neighbors, our mouths spitting vitriol? Where did the United States go?

"I think it's been stolen from us, with the people in power really benefiting from us not being thoughtful," suggests rapper Brother Ali, who addresses these themes of social dislocation, political divides, and the country in-between on All the Beauty in This Whole Life (Rhymesayers, 2017). The album, Ali's sixth, culminates a five-year break from recording that recalls the late David Carradine's peripatetic Kung Fu character, Caine.

Burnt out on the business half of the music business, Ali undertook a spiritual journey. He wandered the Earth, visiting his spiritual guides and undertaking meditative tasks like Caine sweeping the dirt floor. He sat on mountains and soaked in glorious vistas (which appear in the album art and video for the track "Never Learn"). His musical return was not assured.

"That's the beautiful thing about [Minneapolis indie label] Rhymesayers; they really put the organization around me to make sure that I'm never gonna completely hit the ground," says Ali from a tour stop in Mesa, Arizona.

"In that period where I wasn't recording music and I was traveling around the world, they made sure that I could stay afloat and do that. They facilitated that and knew I might end up in a place where I'm not making music anymore. It kind of looked like it might go that way for a while," he continues. "It was actually one of my guides on the spiritual path that told me it was time for me to make an album again. But there was no way for Rhymesayers to know that; they're just supporting their brother."

Beauty's a powerful personal statement from a man who made his name a decade ago with his third full-length, The Undisputed Truth (Rhymesayers, 2007), and its political clarion cry, "Uncle Sam Goddamn." That tune highlighted the dark blots on our collective conscious: "Land of the thief, home of the slave... where the dollar is sacred and power is God."

But this new album isn't about sermons. On the verge of 40, Ali seems to appreciate that the most important change happens in the mirror.

It's a question that subtly underlies the entire enterprise. It's not just a question of "who am I?" and "why?" but "to what purpose?" Ali unpacks the suicides of his father and grandfather, seven and 15 years ago respectively, on the track "Out of Here," asking questions for which there are no proper answers.

The inward look extends to the revealing "Pray for Me," which opens up about Ali's albinism. It evokes a third-grade kickball game where the funky-looking new kid was hung with the moniker, "AIDS." "I fantasized someone else would come take my place," he sings, "because they taught me to hate my face."

That's followed by the uplifting "It Ain't Easy," which acknowledges the simplest truth about life and relationships, crafting it into a hopeful plea. "If what you need and what I have don't match, that's when we need the love thing to fill those gaps," he sings, concluding, "I see no need for us to live with regrets; I'd rather just forgive and forget."

"The idea is really having a depth of relationship with each other that says when we hurt each other we don't disappear from each other's lives. We stay in each other's lives and we work it out and we refine and we grow together," he says. "The idea of un-friending is really an innovation of the modern world. The idea of like, you've hurt me or maybe you're just uninteresting to me, now I don't really know you anymore. What's this really about?"

And what introspective look would be complete without an origin story? All the Beauty opens with "Pen to Paper," which traces Ali's transformation as if from a radioactive spider bite. It recalls his first Reagan-era rhymes at age nine, the Looking Glass escape it provided, the inspiration of KRS-One through Ali's early tours when sponsors (see, Verizon) dropped him for his political views.

The first book Ali ever bought was Stop the Violence: Overcoming Self-Destruction, written by Nelson George. The Stop the Violence Movement was formed by KRS-One, who invited the 13-year old Ali onstage with him, an event referenced in the song.

"He did a lecture and I asked a question, and he brought me on stage, signed his book for me, and suggested that I read The Autobiography of Malcolm X," Ali says, acknowledging the book which led to his conversion to Islam. "I already loved rap and knew that I was an emcee and I knew that's what I wanted to do, but when he came out he introduced so much knowledge and philosophy and worldview and perspective. That was his major impact on me — really showing me that music is conveying meaning and how powerful that is."

To this day Ali is all about that power. An interviewer a few months ago caught up with Ali while he was fiddling with the lighting rig, working on the design. That he takes such personal care and is somewhat fastidious about it speaks to his DIY professionalism and commitment.

"Everything communicates," he says. "The way the lights look affect people and so I want as much as possible to communicate in every possible way, use every tool that we have to communicate what it is we want people to experience."

The funny thing is that more than any time in his career, Ali's not trying to drop science. The knowledge he's sharing is self-taught, which might not be plug-and-play but at least he has no problems vouching for its veracity. Speaking for oneself is the most honest kind of advocacy precisely when one feels they have nothing to say. That's where Ali was when his guru told him to (figuratively) stop sweeping and start making music.

"I told him I didn't feel like I had anything to say, I feel like I'm listening. He said that's good. That's a great place to share from," Ali recalls. "Rather than listening to what the mass media or any outside forces telling me what the focus is, this is really me focusing on what's my actual experience, what's the world actually feel like to me, and sharing that."

That's probably the real secret — invoking a world where we listen and report more than bluster and impugn. All the stories of sound and fury wind up tent-pole blockbusters produced by idiots and signifying little more than the love of money. Yet beneath all that cacophonous nothingness lies a human heartbeat we all recognize; the key is getting quiet enough to hear it.

"There is nothing about [All the Beauty in This Whole Life] that says I have a message for you and I have solutions for you," Ali says.

But even if you don't have all the answers, it's important to speak. Indeed, given all the self-assurance and the limited humility, it's maybe more important to hear from people who struggle with the answers and express their own confusion.

"To me that's what being an artist is about. It's about living from the heart and then figuring the details out later," Ali says. "Everything I have that's good is from following my heart. But it sometimes takes a while to figure out how that's going to come in focus."