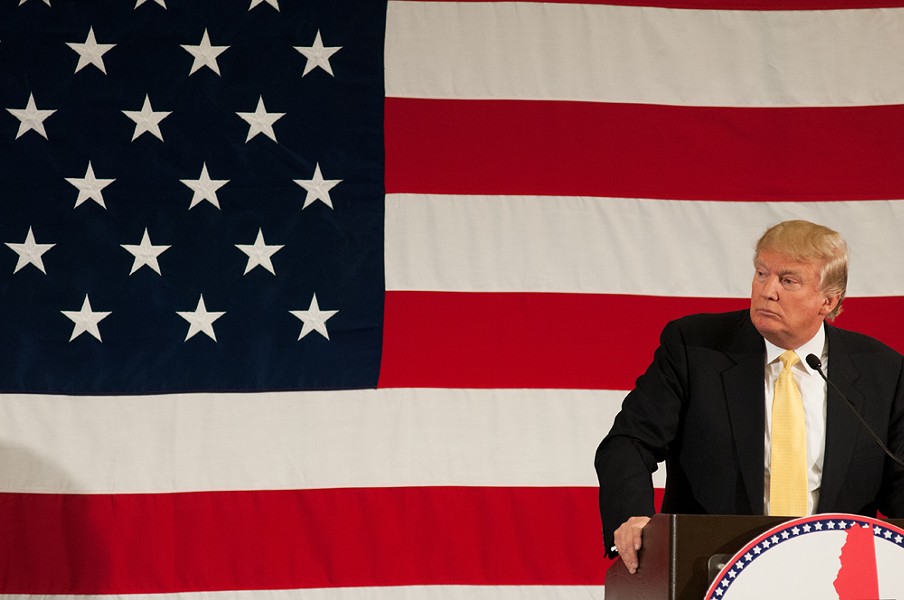 Andrew Cline / Shutterstock.com What would it take for Republicans to decide that enough is enough — that there is a line and Donald Trump has crossed it?

Last week, as I read the unequivocally damning 15-page opening statement William B. Taylor gave to House investigators, I wondered what the final straw would look like, and more specifically, whether one would ever exist. In other words, what would it take for Republicans to decide that enough is enough — that there is a line and Donald Trump has crossed it?

We know what hasn't done the trick.

It hasn't been the deluge of lies and unremitting narcissism, the multiple instances of obstruction of justice documented in the Mueller report, the allegations of sexual misconduct and assault, or the sustained attacks on the free press. It hasn't been siding with white supremacists or ripping migrant children from their parents or abandoning the Kurds in northern Syria to slaughter at the behest of autocrats in Turkey and Russia.

And now, with increasing clarity, we know that he used American foreign policy to push foreign governments to dig up dirt on his political enemies.

Taylor, the top American diplomat in Ukraine, detailed how Trump had made hundreds of millions of dollars in military aid contingent on a public statement from Ukraine's president that his government was investigating Joe Biden and a debunked conspiracy theory about Ukrainian interference into the 2016 U.S. election, things Trump could then use to muddy the waters of his own corruption next year. This was the clearest evidence yet of a quid pro quo, and it came not from a faceless whistleblower but from a Republican with whom Trump's secretary of state had pleaded to take the Ukraine gig.

To get a sense of how bad this was, consider the administration's reaction: On Tuesday, the day Taylor testified, Trump rage-tweeted that the impeachment proceedings were a "lynching"; his press shop halfheartedly called it a "coordinated smear campaign from far-left lawmakers and radical unelected bureaucrats," ignoring the fact that this particular bureaucrat was their own guy. On Wednesday, with the White House's encouragement, a group of Republican congressmen made a clownish spectacle of storming a secure room in the Capitol to disrupt a deposition, some breaching national security protocols by bringing their cell phones. And on Thursday, the Department of Justice leaked that its investigation into the origins of its own Trump-Russia probe had suddenly become a criminal investigation, as if a blind man couldn't see through that charade.

If there's any coherence to Trump's strategy, it's no longer convincing the public at large that he did nothing wrong. It's keeping enough Senate Republicans in line and giving them any thread to cling to. Right now, that thread is process — the notion that House Democrats are being unfair to Trump.

Process arguments tend to be weak — the place you go when you can't argue the merits — and this one's no different. Democrats are abiding by rules Republicans set when they held the House following the tea party wave of 2010, and Republicans eliminated a requirement for a full House vote before committees can authorize their staffs to conduct depositions.

So, yes, depositions are taken behind closed doors — as they were during the endless Benghazi investigations — but that makes sense, since you wouldn't want witnesses being intimidated or coordinating their stories. And Republicans on the three committees involved in the inquiry can participate in the depositions. Most important, all of this will be replayed in public hearings before the House votes to impeach, and Trump will get to defend himself during a Senate trial.

Last week, all but three Republican senators — Mitt Romney, Susan Collins, and Lisa Murkowski — cosponsored Lindsey Graham's resolution condemning the House's impeachment inquiry. But five other Republicans declined to do so right away, and Senate Majority Leader Mitch McConnell reportedly had to water down the resolution's initial commitment to vote against removing Trump to get the caucus on board, focusing instead on the alleged lack of "due process."

At least some Republicans, it seems, were worried about tying themselves so closely to Trump at such a precarious moment. But right now, they're still in his corner — and looking for any excuse to stay there.

When Democrats went to the wall for Bill Clinton 20 years ago, Clinton was a popular second-term president accused of lying about an affair. Trump is accused of something far more consequential, and at about 40 percent approval, he's anything but popular — about 20 points below where Clinton was in the run-up to his impeachment. Clinton was presiding over a surging economy; Trump inherited a recovery that is slowing down and showing signs of wear. Longer-term, Trump's coalition — old, white, evangelical — represents America's demographic past, not its future.

The Republican Party is following a pied piper over a cliff, and its leaders are either too ignorant to see it or too cowardly to stop it. Of course, if this hollowed-out shell of moral depravity is what the Party of Lincoln has become, its collapse can't come soon enough.