What to do if you hate your tattoo 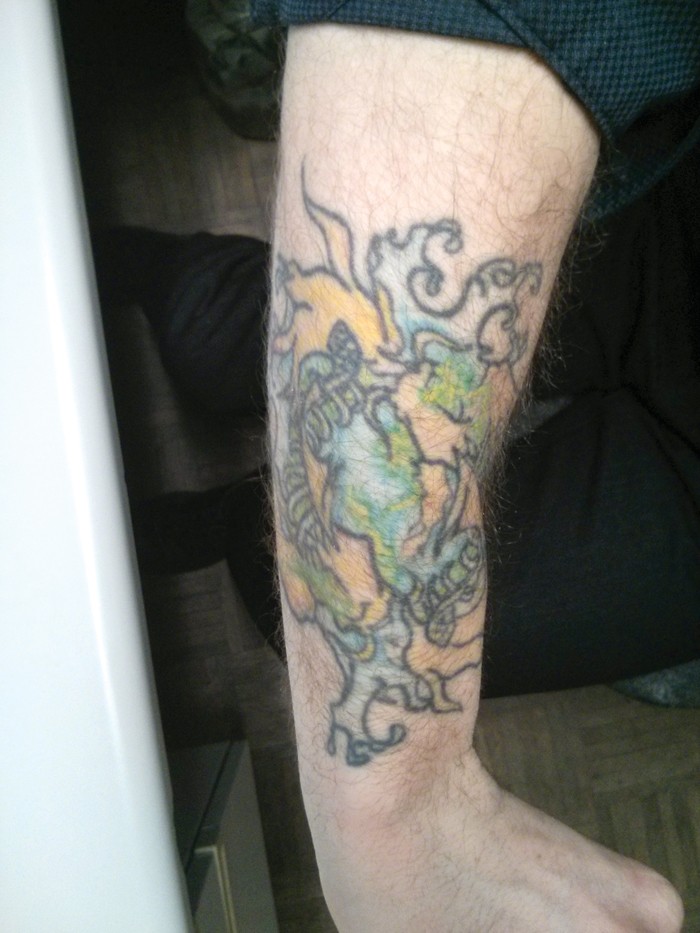 When we put out an ad seeking Detroit’s worst tattoos, we thought we’d get some funny photos and just print a one-page gallery. The problem was we only got one response in our inbox. Tilting our heads and squinting our eyes, we tried to make out what the fuck we were looking at — it looked like there were waves, and maybe fire, and, possibly, bones.

We all agreed that this really was a bad tattoo.

“Too many people are proud of their bad tattoos, then,” Dan Pantalleresco says when we tell him that his was the only response to our query. Pantalleresco, however, is not proud of his bad tattoo. Not that he’s against tattoos in general — aged 38, he has seven, and splitting his time between working as an IT guy, slinging drinks at the Two Way Inn, and playing in his band Ictus, it’s not like he needs to cover them up. He’s just against this tattoo.

“I was working at this haunted house, and I met this guy — I’m not going to mention names, because he’s still a nice guy,” Pantalleresco explains. “He became my friend, and I let him move into my house. He aspired to be a tattoo artist, and he bought all of the gear and everything and [my friends and I] would let him go to town on us.” Pantalleresco says the first tattoos were bad, but as part of his learning process his housemate would redo them and make them better.

“Later, I was 24 or 25 years old, I told him I got this idea,” Pantalleresco says. “I want to call it ‘The Battle Within,’ and I want my sign, Pisces, and I want it to be koi fish, I want them chasing each other, and I want them ripped up, because it’s ‘the battle within.’”

We squint at the tattoo again. Huh?

“They’re supposed to be two koi fish. The background is the water, and they’re supposed to be ripping each other into shreds,” he continues. “He drew it up — it was a beautiful picture. We had a little argument about eyes — I told him I want the eyes on there because there’s a lot going on and I think it would really define the head. He said, ‘No, no, you’re going to want this energy.’ He fought me the whole way on it.”

It seemed like Pantalleresco was cursed with explaining this terrible tattoo to everyone who asked. So, we showed it to Dr. Eric Seiger from the Skin and Vein Center to see if he would help Pantalleresco out.

Dr. Seiger’s been in the business of removing tattoos for more than a decade. He’s no stranger to bad tattoos and no stranger to charity — for the past five years, he’s worked with the Detroit Hispanic Development Corporation as part of Freedom Ink, a tattoo removal program to help ex-gang members get rid of tattoos that could make them and their families targets of violence.

He got his start when he went to Texas for a dermatology conference and met a man who was removing tattoos from ex-cons. “He was making a difference for people, and I loved that,” Seiger says. “I was really moved.” He bought the same machine as the man in Texas.

That machine is known as a Q-switch laser. It works something like this: A laser is an intense form of only one specific wavelength of light, and this wavelength is only absorbed by certain colors, like the dark pigments of a tattoo.

“The Q-switch is like a door that opens real fast and then closes real fast — it’s like burst of energy that comes out and smashes the pigment,” Seiger explains. “But it’s so fast that it doesn’t heat the skin up to cause scars.”

The problem is Q-switch lasers only really work with darker colors, like reds, blacks, and dark blues: Bad news for Pantalleresco and his green and orange ink. Fortunately, the first technology became available this past year that expands the range of colors Seiger can treat — a $300,000 machine called the PicoSure, of which there are only 60 in the country.

“When I saw this guy’s arm, with a Q-switch laser, I wouldn’t have touched it,” Seiger says. But the PicoSure can handle it. And not only does the new technology increase the range of colors that can be treated, but it decreases the amount of time treatment takes.

The PicoSure laser fires a burst for only a picosecond — that’s a trillionth of a second, or 100 times faster than a Q-switch blast. “Because it’s 100 times faster, the energy is so much more powerful, “he says. “So instead of blasting it into pebbles — I’m saying microscopically, pebbles — it blasts it comparatively into sand particles.” This means treatments now take half the time, between five and 10 sessions.

Still, Seiger says the process is painful — it hurts far more and takes more time than the initial tattoo. It’s also expensive. Seiger says he prices by size, starting at $1,200 for a small tattoo, a price that could go up to $12,000 for, say, a full back tattoo. “The people who come in really want this done, because they’re in some sort of emotional distress about it,” he says. He charges one fee up front, until the tattoo is gone, and offers financing.

Is Pantalleresco excited about our hookup with Dr. Seiger? “Absolutely. You have no idea,” he says. Yet despite the botched concept, Pantalleresco actually wants to get the same tattoo again — only this time by a professional.

“I might stay away from the tearing-up part and just do my Pisces and the koi fish, but have an extremely well-known, well-practiced tattoo artist do it,” he says. “My tattoos always have to mean something to me. That’s something I will totally go back to. This is for me.”