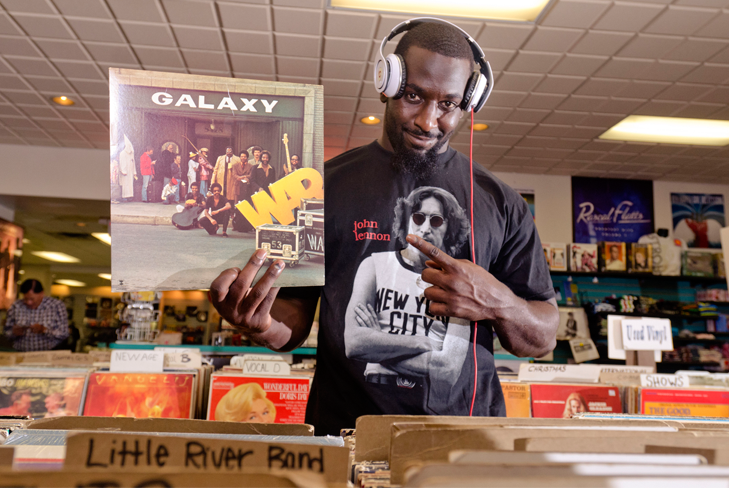 Perception is not always reality in my eyes — sometimes you learn things and expect a certain outcome, but that's not always the case, especially when it comes to me.

So, come along, Detroit, as I take you for a bumpy ride in the coming weeks and months, through all different genres of music. It will be my take, exactly how I hear it.

This is far from what you would expect from an NFL linebacker. Don't you think?

You may wonder what football camp life is like. Well, I'll tell you: It's brutal — long days and short nights. Long practices and even longer meetings; I'm shaking my head now just thinking about it. So it takes enormous amounts of calming, relaxing music to help me get through it.

Let's get into it:

1) Sade The Ultimate Collection (Epic) — Her voice makes me think an angel is singing to me and only me.

2) Alicia Keys Songs In a Minor (J-Records) — Amazing album all around. Puts me in another world every time I listen to it.

4) Anita Baker The Best of Anita Baker (Atlantic) — Amazing voice, one of the best ever. Soothing to the mind.

5) DMX It's Dark and Hell Is Hot (Def Jam) — More of a pre-practice listen. It's one of the only rap albums I listen to and one of my favorites. You can hear his hunger, and I was hungry for success coming to Detroit.

Album of the Week

The older we get, the more nostalgic we feel. At least I do, especially when it comes to hip-hop music. I've come to realize that the past is just that — the past — and it's not coming back. Technology is changing every day so why shouldn't music? That being said, let's get into this new J Cole album.

J Cole was the first artist signed to Jay-Z's Roc Nation imprint, and his debut, Cole World: The Sideline Story, was one of the most highly anticipated albums in recent memory. With the success of his previous mixtapes The Warm-Up and Friday Night Lights, expectations were at an all-time high.

Something I continuously heard growing up was that "pressure bursts pipes," but in a freestyle, the native of Fayetteville, N.C., says "Cole under pressure/ What that make? Diamonds." And that he did.

It's hard to find albums as cohesive as Cole World in these days of iTunes. This album can be played from start to finish without pressing that forward button on your iPod. Everybody wants those hot singles and radio airplay, and Cole is no different with songs such as "Can't Get Enough," featuring Trey Songz, and "Work Out." Both songs show a different, more fun side of the young emcee. "Mr. Nice Watch," featuring Jay-Z, shows Cole a little outside of his element, but his boss gets the RBI on the closing verse. These songs are solid, but seem slightly forced compared to the rest of the album.

Substance is something I appreciate in music. J Cole ranges from such topics as struggling to make it ("Dollar and a Dream III") to abortion ("Lost Ones"). These types of songs are missing these days, in mainstream music especially. Missy Elliot comes out of hiding to lace the chorus for the instant classic "Nobody's Perfect." The three-headed monster of "Rise N Shine," "God's Gift" and "Breakdown" is the strongest part of an album that gets my face all scrunched and my head nodding. "Sideline Story" is an absolute banger that showcases Cole's flow and lyrical ability. Two songs from his mixtapes, "Lights, Please" and "In the Morning" featuring Drake, only add to the overall product.

This album is a modern day classic, in my opinion. Amazing debut album that caters to everybody, while Cole remains himself (he produced 11 of 15 tracks). If you are nostalgic, this album will give you a taste of the good ol' days, but with a 2011 twist. I guess we can really call it "Villematic." Go get a copy ASAP; 8.5 outta 10.

Justin Durant is a linebacker for the Detroit Lions. He learning how to DJ. Send comments to letters@metrotimes.com. He rocks the tweets at twitter.com/JDurant52.