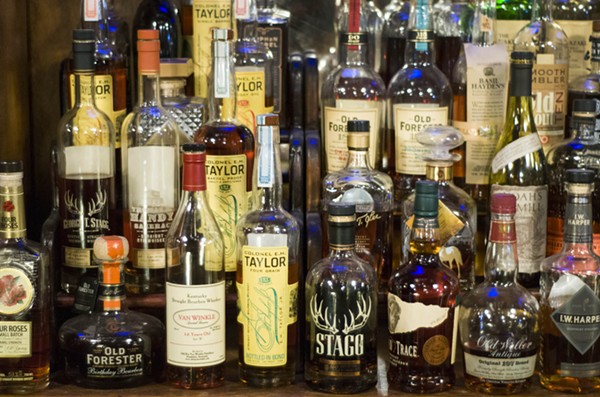 Michigan Bourbon Club member Chris Perry calls it "Schrodinger's Bourbon": It's that bottle of bourbon that you're afraid to open because it's rare or valuable. You're worried it'll either turn out to be not worth your money or, worse, so good that you'll cry when you realize you can't get any more. With bourbons becoming increasingly popular — yes, still — as well as increasingly specialized, it can be tough to decide what to splurge on and what to throw back with a chaser of Stroh's.

We're assuming that you have your favorite shot spot. So we talked to some whiskey fanatics and purveyors about the best bars and stores to visit for that unicorn bottle. Since each holds its own individual character, we're not ranking them like we did on our quest for the best chicken wings. In many cases, you'll snag a pour that is unique to that location. Most of the places on this list have individual store picks — a barrel or portion of a barrel found only in that spot.

American whiskey distilling, aging, bottling, and distributing is an incredibly complex undertaking. Sometimes it's not easy to understand why one bottle costs $30 and tastes just fine, while another costs $2,000 and tastes... just fine, but more intensely so. All recommendations here are presented as a general overview, and we would never presume to dictate individual preferences. Some like a buttery, caramel-and-pepper whiskey with more corn, and others prefer a high rye content oaky bourbon that bites you back. To each their own. No matter your preference, if you're a whiskey drinker, you'll find something you like at each of these spots.

We've listed a few below, and, as always, your bartender knows their stock best. We've also rounded up the best stores to hit up, in case you feel like sipping in solitude, Ron Swanson-style.

If you're willing to open your wallet, this swanky downtown spot has a vast selection. Owner Jeremy Sasson spent years collecting whiskey privately, and it shows in the enormous number of rare bottles, from Barterhouse to Bookers. If you're looking for that "I've always wanted to try" whiskey, they'll have it. You may just find a new favorite.

Quite possibly the antithesis of Townhouse, the Painted Lady is a bare bones bar with the occasional loud band and whiskey bottles crammed into every nook and cranny. Owner Andrew Dow treks down to Kentucky frequently to sample barrels and pick up bottles you can't get in Michigan. Their current barrel pick is a solid Buffalo Trace Single Barrel, and as with every other pour there, it's shockingly inexpensive, so please don't tell anyone you don't like or you'll ruin it for the rest of us.

Corktown's favorite cocktail club also boasts a solid whiskey selection. If you're in the company of someone who prefers not to take their nectar neat, Sugar House can offer enough for both of you. It's obvious that Dave Kwiatkowski and his crew put just as much homework into crafting their whiskey stock as they do into perfecting the cocktails, and they have collaborated with several Michigan distillers for one-of-a-kind Michigan picks, including Long Road and Traverse City Distilling Company.

This may be cheating a bit, but paired with the beer selection at Ale Mary's, the selection of non-bourbon American whiskey is solid and as well-considered as their beer list. The whiskey menu covers a huge spectrum of taste profiles and distilling processes, from Speyside Scotch to Colorado Rye. Obscure non-bourbons are a specialty, and they also stock the standards. Reasonable prices mean you can try that weird-looking bottle without losing a fortune, too.

This St. Clair Shores bar has a printable checklist of whiskeys to try, and just looking at it is almost enough to get you drunk. Here's an example: Do you like Jefferson's Reserve? Great, they have 11 different expressions, from the standard shelf pour to Presidential Select 18 year. Deciding what to drink can be both terrifying and exhilarating, so plan some time (and maybe a designated driver) in case you fall in love with more than a couple.

You didn't know that Ferndale's speakeasy-style cocktail bar also stocks some ultra-rare spirits? You're not alone. The Oakland's Sandy Levine prides himself on his ability to obtain the old stuff. He has an Old Weller older than most of his customers. Old Weller of all kinds in fact, and for a lot less than the Pappy that wishes it still tasted as good as the original Old Weller. If you're not quite ready for that once-in-a-lifetime pour, ask what Four Roses Barrel Picks they have in. There are usually a few in house, which makes for a very nice impromptu tasting menu.

If you feel like buying local, try the latest at any of these great places. The service staff at all four distilleries never fails to impress with their knowledge of the whiskey-making process. Although each tasting room has its own unique vibe, they're all perfect places to while away a random afternoon.

Both spots are owned by Robben Schulz, and his staff whips up a mean cocktail and a neat pour with gusto. If you find yourself out that way, be sure to stop in. Tony Batou knows his stuff and prides himself on stocking the best American whiskeys this side of Ann Arbor. He makes easily 30 or 40 trips a year to Kentucky, to sample strains for his incredible store picks. Tony's also friendly and more than willing to talk filtration and mash bills with anyone, novice to expert. A recent trip left us poorer in cash but in possession of a full proof single barrel 1792 that is heavenly.

There must be something about the name "Wine" in a liquor store that signals dedicated whiskey nuts. Cliff and Kelly stock all the usual suspects, plus hard-to-find beer and a few different store picks.

They host whiskey bottle signings, frequent tastings, and they don't mark the prices up exorbitantly. Beyond that, there's not much more you need to know, is there?

Dominic Aprea is Michigan's King of Four Roses. His store reflects that, with rare bottles galore and a staff that is thrilled to discuss the byzantine intricacies that make up the brand's different taste profiles. Later this month, he'll be hosting Four Roses' legendary brand ambassador Al Young for signings and a major bottle release.