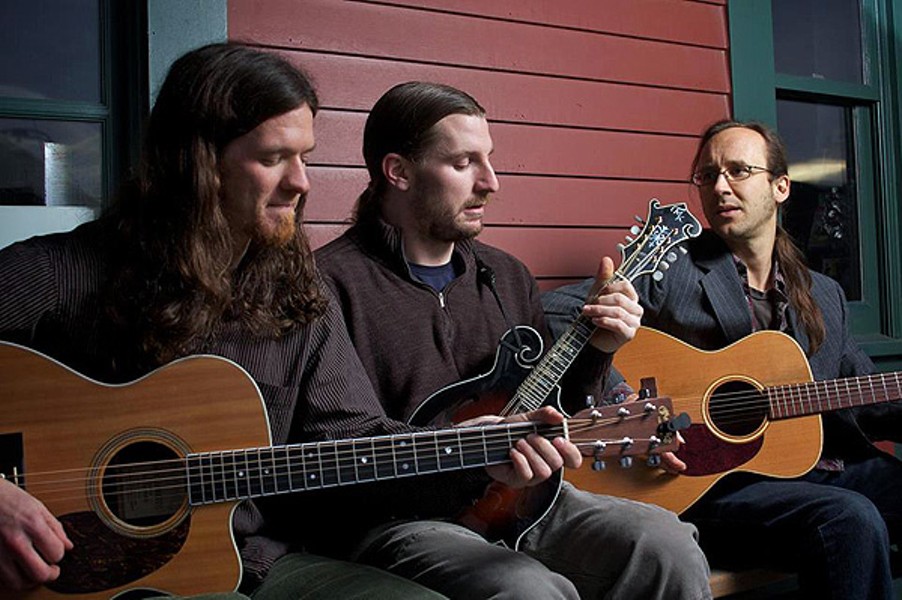 Two words are displayed prominently on the banner that spans across the stage at Short's Brewing Company in Bellaire, Mich.

It's simple — there is no cover charge for live music at the popular brewery. Rather, patrons are expected to toss a few bucks into a keg that sits on the stage. The musicians divvy the cash up at the end of the night.

It's not a foreign concept to guys like Rick Doviak.

Doviak plays in the Whistle Stop Review, a Detroit-area bluegrass band. Two days after Thanksgiving, Doviak and his bandmates, Blake Short and Joe Haugh, took the stage at Short's, trying to fill the keg with green.

"It's a tough climate right now," Doviak said. "Financially, it's hard work. It takes a lot of time and patience. We're making a go of it, though. We're making things happen."

The band is used to stages like the one at Short's. This year alone, Whistle Stop Revue has played close to 100 shows, mostly at festivals and brewpubs around the state.

Such is the life of the struggling-for-notoriety touring band. No gig is too small, no stage is unwelcomed.

Doviak says it's hard to pin it down for sure, but he estimates the band has traveled somewhere between 25,000-30,000 miles this year.

Although Whistle Stop Revue is a relatively new band — it formed in 2012 — Doviak has been playing (mostly electric) guitar in bands for years. However, when he met cousins Short and Haugh, things changed. They started playing acoustic music and experimenting with their stringed instruments, and they all seemed to have similar feelings. They all knew it could work.

"We all had instant chemistry," Doviak said. "Musicians will know what I'm talking about. When you start playing with the right kind of people, you just know. And I think we all knew we could do something special."

Playing bluegrass music isn't just something Doviak, Short, and Haugh are passionate about, it's also a genre that makes financial sense for the trio.

"When it comes to humping equipment around, acoustic music is a lot easier," Doviak said. "We're a grassroots operation and we knew that if we wanted to make things work, we'd have to keep our overhead low."

So when Whistle Stop Revue tours, their roadshow doesn't really include much more than the players and their instruments: Doviak and his guitar, Short and his upright bass, and Haugh with his mandolin. There are no big amps or speakers. There isn't even a drum kit because the band doesn't have a drummer. They rely on Short's base lines to keep time.

"We actually hear from a lot of people that they love that we don't have drummer," Doviak said. "When you are playing at bars and brewpubs, you might not be the only reason people are there. Our sound allows people to enjoy the music but not be drowned out by it."

For the most part, though, Doviak and his band are just glad to be playing music.

Now though, the band is trying to slay a dragon in unfamiliar territory. The three-piece progressive bluegrass outfit is trying to take on Detroit.

Despite being from the area, the Whistle Stop Revue is still mostly unknown in Detroit. They played at Arts, Beats, and Eats this summer in Royal Oak, but Motown is kind of a foreign territory for Doviak and Co.

"We haven't done much here," Doviak said. "Detroit is a big complex beast to us."

A native of the area, Doviak moved to Grand Rapids for college and became familiar with the acoustic musical communities on the west side of the state. When he hooked up with Haugh and Short in 2012, he already had connections in a place where bluegrass music already had a foothold.

"Coming back into it, I knew we would work in the college towns like Kalamazoo and Grand Rapids," he said. "Those were places where the style of music already had a big fan base. As we started touring more and more, we found more pockets in northern Michigan where it worked, too."

Doviak said the band never intended to ignore Detroit. Rather, it looked at the Motor City with an odd kind of reverence. For Doviak, Haugh, and Short, they needed some time before tackling the Motor City.

"There is just so much going on in Detroit musically," Doviak said. "There always has been. It's a legendary place when it comes to musical artistry. We wanted to make sure we were ready for it. We didn't want to get swallowed up. So for us, Detroit was goal that we needed to work toward."

And the band seems to be ready.

Recently, the band caught the attention of Ann Delisi, host of Ann Delisi's Essential Music on WDET-FM (101.9). Delisi discovered the band after their performance at Arts, Beats and Eats and added them to the rotation in her show and invited them in to perform in-studio.

"That was like a dream for me," Doviak said. "I grew up listening to 101.9. That's how I discovered jazz music. So to walk through those halls was kind of surreal. We know we aren't rock stars or anything, but it's still pretty amazing to hear your music played on a radio station you respect."

Doviak said the work with Delisi made the band feel like it was ready for Detroit.

"We've been playing and touring constantly for the past two years," he said. "We think we're ready. This isn't the kind of music that most people are really familiar with. It doesn't scare us because we are constantly inspired by people who like the sound. Not everyone grows up listening to bluegrass, but it's an infectious kind of music. I really think when people give it a chance, they end up liking it."

Whistle Stop Revue isn't the first bluegrass group to take on Detroit. Kalamazoo's Greensky Bluegrass has had some successful shows in and around the city, and the Webbs, a local band from Detroit, have also showcased their unique bluegrass sound. But the genre is hardly oversaturated here. So Doviak is hoping his band can help the burgeoning bluegrass movement gain popularity in Michigan's biggest city.

The guitarist cited popular acts like Mumford and Sons and the Avett Brothers for the renewed interest in folk, Americana, and bluegrass music.

"It's kind of become a cool genre again," Doviak said. "People are becoming more interested, and they are more open to giving bluegrass and folk bands a chance."

"We're excited to perform for Detroiters who may not be familiar with our style," Doviak said. "Bluegrass is an interesting style. It's a sound that people can identify with. You can go anywhere you want with it. I think we adhere to a lot of the traditions of bluegrass, but we are definitely stretching the boundaries."