Isabelle Huppert stuns in story of a family ripped apart 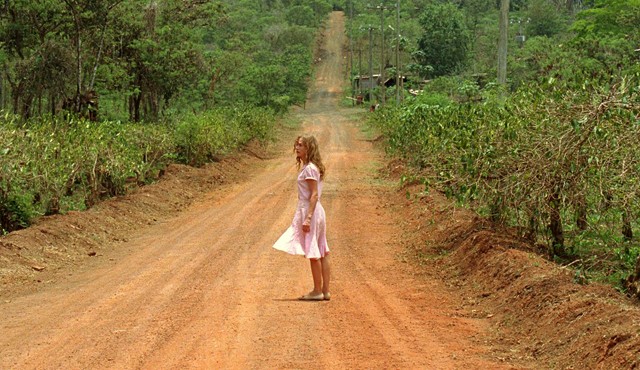 White Material is a stunning, harrowing and utterly compelling cinematic experience that leaves the viewer with a lingering and profound sense of pointlessness as the credits roll.

The story of a once-proud French colonial family's slow but steady undoing in an unnamed, merciless, war-torn African country, the film is as mesmerizing to watch as it is hopeless to draw deeper meaning from.

As rail-thin but iron strong Maria Vial, Isabelle Huppert spends much of the movie literally under the gun, a hostage of a steady procession of goons, rebels and thieves, and victim of her own obliviousness in the face of looming danger. She continues working her dying coffee plantation despite the fact the workers are mostly gone and rebels are beating down the gate. Her teenage son Manuel (Nicolas Duvauchelle) is humiliated by a pair of child bandits who steal his gold necklace and chop off a lock of his blond hair. He responds by shaving his head, grabbing a shotgun and going on a futile rampage. The family's patriarch (welcome back Christopher Lambert!) is even more dissolute and impotent, still attempting to wield his faded influence and cut backroom deals — when mere survival is the only option he's got left. Money, which once greased all gears, is in short supply; the only resource Maria has left is gumption, which she has in abundance.

The chickens have come home to roost, and the economic and cultural reign of the whites is at an end, but what will the blacks do to replace them? The alternative is nothing short of chaos and violence, which apparently is morally preferable because it comes from within, not without.

I say "apparently" because director Claire Denis (35 Shots of Rum) is far more interested in questions and accusations than answers. To her, the political and moral consequences are less important than the emotional ones, and the evils of colonialism are only of interest as a dramatic launch pad. There is plenty of breathtaking drama in White Material, with sustained tension and gut-wrenching moments, all rendered with a gorgeous, lyrical sense of style. Yet visual beauty for art's sake isn't quite enough in a film with such raised expectations and clearly self important intensions.�

Denis is one of the most interesting directors working today, but in this case, like her sad, doomed heroine, she seems to have failed to ask herself a few vital questions.