Who finances what in Ilitch deals? 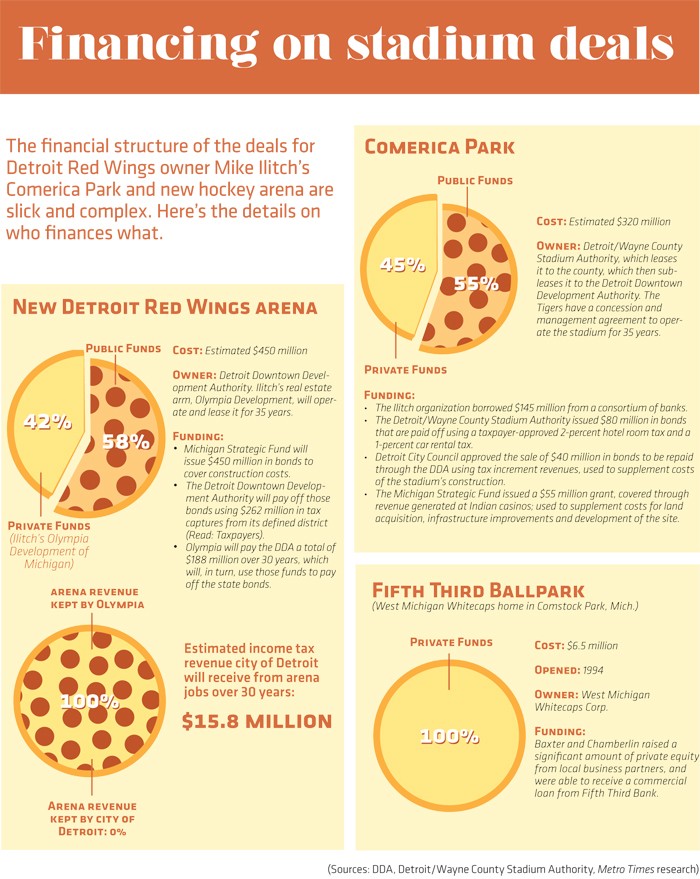 The proposal for the estimated $650 million so-called “catalyst development project” near downtown Detroit includes a new Detroit Red Wings arena with potential residential units, restaurants, businesses, and bars. Through a combination of tax captures in the Detroit Downtown Development Authority district and the virtual donation of city-owned land, the public will contribute up to $285 million toward Red Wings owner Mike Ilitch’s dream project.

The hope, project backers say, is that the massive project would bridge the thriving Midtown and downtown districts of Detroit. But since the initial deal was announced in December 2012, it’s become apparent it could stand to benefit the Ilitch organization the most.

Here are the details:

• The estimated $450 million stadium, bounded by I-75 and Woodward, Cass and Temple avenues is expected to be flanked with $200 million in additional spinoff development. This could involve anything from parking lots, to restaurants, hotels, and more. As part of the deal, Ilitch’s real estate arm, Olympia Development of Michigan, would receive a $62 million tax credit if the company draws the $200 million of investment within five years of the first event being held at the new Red Wings arena. But if the company defaults on that stipulation, there’s virtually no liability, except it would lose the tax credit, according to an analysis by Detroit’s Legislative Policy Division. The arena would still be constructed. “The current framework for this deal entails little to no risk to [Ilitch] with the potential for significant revenue increases,” the Nov. 1, 2012 cost-benefit report states.

• The public’s contribution will come in the form of tax captures from within the Detroit Downtown Development Authority’s district. Under the state law passed in December 2012 to secure funding for the project, about $13 million in revenue earmarked for the state School Aid Fund would continue to be captured by the DDA. The DDA had previously been using the funds to pay down bonds issued for improvements to downtown Detroit, but those have since been retired. Therefore, the DDA says, it won’t affect the state School Aid Fund any more than it did previously. Michigan would cover any shortfall to the state School Aid Fund, per state law. But, had the funding mechanism not been tapped again for economic redevelopment, the DDA school tax capture would’ve been sent to the School Aid Fund, says Eric Lupher, research director of the nonpartisan Citizens Research Council of Livonia. That revenue stream, along with an additional $2 million annual tax capture from the DDA, will be used to pay down $450 million in bonds being issued by the Michigan Strategic Fund, an arm of the Michigan Economic Development Corporation, to fund the project’s construction.

• To fund its portion of the project, Olympia will dedicate about $11.5 million in revenue per year to pay down the $450 million in bonds, about 42 percent of the cost.

• Previously, under the old Joe Louis Arena lease, the city received an estimated $3 million annually from the proceeds of a 10 percent ticket surcharge, 7 percent surcharge on concessions, and a 5 percent surcharge on suites. Future naming rights for the new arena would also go to Olympia.

• Olympia Development says the project will create 5,500 construction jobs, with 51 percent earmarked for Detroit residents. The city estimates that will generate about about $8.5 million in income taxes for the city of Detroit annually over the two- to three-year construction period. The company says about 400 additional permanent jobs will be created at the arena when it’s fully operating, although it’s unclear what those jobs would entail. Just 30 percent of contracts awarded for the project would go toward Detroit businesses, under terms approved by Detroit City Council earlier this year.

• The city won’t be able to use Joe Louis Arena after the Red Wings move to their new home. A recent deal approved by Detroit’s City Council and the DDA dictates a non-compete clause for ticketed events, ensuring the lights to remain off at the Joe until it's demolished. It will be financed with $6 million in bonds from the Michigan Strategic Fund. The city will be required to establish a brownfield redevelopment plan on the JLA site for whatever project to repay the bonds issued for the demolition.  The city will be required to submit an application for the funds within six months of the Red Wings' move. The application would require a minimum $24 million investment on the JLA site. It’s unclear what would happen if the city fails to meet the requirements, but it’s likely the arena would be left standing unused — a sticking point for some councilmembers who voted against the deal.

• The Detroit City Council had to approve the expansion of the Downtown Development Authority’s footprint in order to facilitate the new arena and surrounding district. The increase in property taxes generated by the new facility, therefore, will flow into the DDA’s coffers.

• The city would turn Cass Park over to Ilitch’s Olympia Development, who, according to public documents, say it would be maintained as a public park.

• Under the deal, the city of Detroit will receive no revenue.