John Carlisle interviews his famous alter-ego about their new book 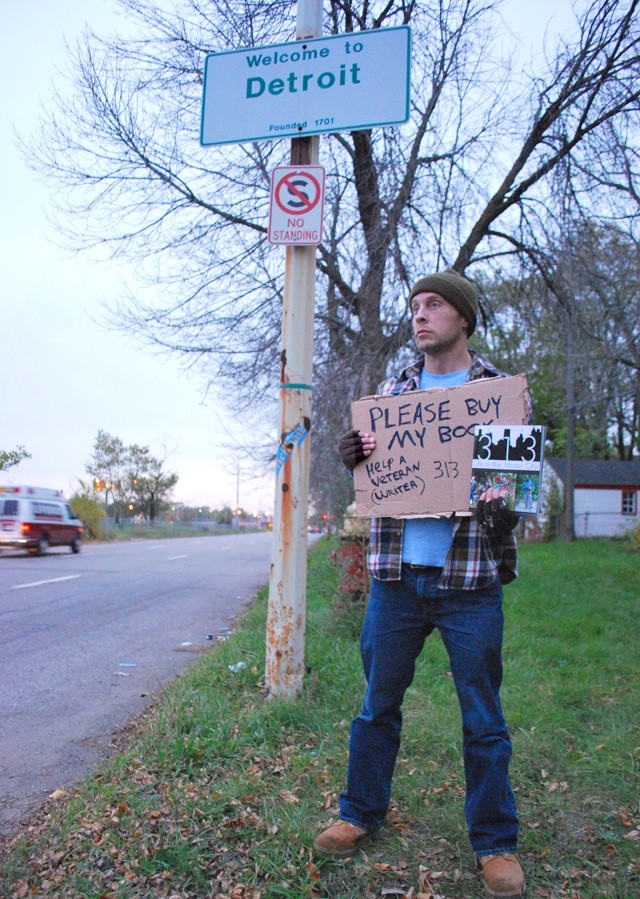 Our columnist Detroitblogger John, whose real name is John Carlisle, is the author of a new book called 313: Life in the Motor City, which is available in stores now. Although we know they are the same person, we've asked Carlisle, who himself is an editor at C&G Newspapers, to interview his alter ego Detroitblogger John about his book, his column, and the people and places he profiles. The interview took place over drinks at Casey's Bar on Dix in southwest Detroit, where it's not unusual to find someone engaging in a Q&A session with himself.

John Carlisle: So what was the inspiration for the book?

Detroitblogger John: Wait, so you're interviewing yourself here? That's not disturbing or anything.

Carlisle: Well, as you know, newspaper staffs has been pared down everywhere, Metro Times included, and this afternoon I'm the only one around to interview me. Plus I'm familiar with some of your work. Now, about that question. ...

Detroitblogger: The inspiration was the bills in my mailbox. No, actually it's because I'm proud of the stories I've found over the past four years. I've written about some fascinating people and places, and I thought they'd make a pretty cool book if a bunch of those stories were gathered together.

Carlisle: What's in the book?

Detroitblogger: It's a collection of 42 stories and more than 100 glossy color photographs, dozens of which were previously unpublished. The idea behind both the book and the column is to highlight overlooked or forgotten places and people in the city — those working under the radar or off the main roads, the people nobody ever hears about but who are the ones keeping the city going, behind the scenes, in little ways. They're stories about regular folks doing interesting things under often-tough conditions.

Carlisle: One question people always ask is how you find those you write about.

Detroitblogger: I grew up here and I've spent most of my life here, so I know the city well and I know where to look. But mostly I just drive around the neighborhoods or walk down a street and talk to anyone I see. Most of them have a story. Some of those stories are interesting. And a handful of people actually are willing to share them.

I find nearly all of them that way. I met Mary King, the woman with the chicken farm in Corktown, just because I saw her coop in passing and went to the door. We sat and talked on the porch for hours. I had no idea she had this civil rights background until I spoke with her. That's how it usually goes — some people can have the most amazing story and you never know until you spend time with them.

I found Mr. Bow Tie just by driving down Seven Mile one day and seeing him cleaning headlights and wondering, what the hell is this man doing? I ran into Charles "C Chef" Gaither, the grill cook with the horseshoes-playing guys hanging around him all the time, when he was selling ribs at a blues concert in a field. The horseshoe guys had followed him there, too. They're always with him, and that became the story. I came across the family living in the abandoned apartment building when I saw kids playing in this glass-strewn courtyard as their father watched. I knew the place was empty and got out to find out what they were doing there. And they wound up being very open and forthcoming with me about their lives in this crumbling place.

A few come from word-of-mouth or just coincidence. The man who lives in the Packard Plant introduced me to Tom Bell, the guy who lives in a tent by the river; I guess people with unusual living places somehow find each other. Leroy Haskins, the elderly man who can't stop writing books about everything he thinks of, was a wrong number, of all things. He called looking for someone else, and once I heard him talk I knew I had to meet him. And he turned out to be this fascinating Detroit character.

Carlisle: So what's with the silly pen name, "Detroitblogger John?"

Detroitblogger: It referred to my longstanding website, detroitblog, which despite the name isn't even really a blog, but rather a collection of feature stories about the city. Originally it was about getting into abandoned skyscrapers without permission and documenting the condition of those historic structures, so keeping myself anonymous seemed a good way to avoid unfriendly attention from the cops. It turns out, though, that the police were as indifferent to my trespassing as they are about other minor things, like responding to 911 calls, so I worried for nothing. But the book is under my real name, John Carlisle, so please repeat that name as often as possible: John Carlisle. John Carlisle. John Carlisle.

Carlisle: Do you stay in touch with the people you've written about?

Detroitblogger: Shouldn't you know? You're me. But I'll play along — I do still hear from a lot of them. Some phone me every week or so, just to say hi. Jay Thunderbolt is one of them. He's still got the in-home strip club, though he boarded the place up to make it look abandoned to ward off banks hell-bent on foreclosing on the place. The raccoon-hunting blues musician I found is another — he invites me to his shows and his wild game dinners sometimes. Jack Rabbit, the one-man neighborhood watch, calls to let me know when this or that vigilante from his neighborhood goes to jail.

And several have died. They don't call me so much anymore. The owner of Detroit's last gun shop, for example. He suffered a fatal heart attack a few years ago, and the building he owned suffered a fatal arson attack soon after. Several other people and places in the book are now gone, too, and I'm glad I got to chronicle them before they disappeared.

Carlisle: What impression of the city will someone get from reading this book?

Detroitblogger: That Detroit isn't all crime and poverty and illiteracy, although these things are indeed realities of life here. But the city's also little bakeries and magnificent churches and community groups and outdoor fairs and history at every turn. There are a lot of decent people here doing what they can to keep their street or their neighborhood alive, and there are tons of things going on that people never hear about. And a lot of those things fall away because few people know about them. Those are the things I love to write about.

Carlisle: Last question — as someone who usually does the interviewing, has being interviewed by yourself been an unusual experience?

313: Life in the Motor City is out now from The History Press.