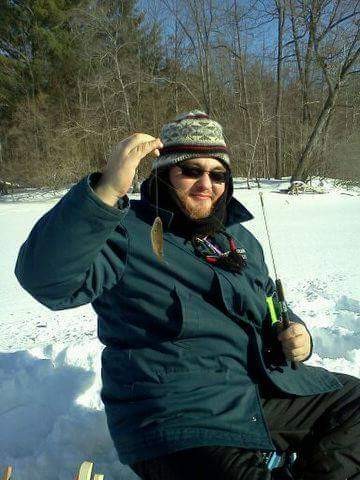 For years, I had known that my buddy James Cornish was more than a talented musician and composer — he was also an ice fisher, and every winter he headed "Up North" to do his thing. But I'd never have guessed that his love affair with the sport started near where he grew up on Conner Street in Detroit.

"For me it started at about 7 years old, around 1977," Cornish tells me. "I grew up on the east side of Detroit and we had these wonderful canals. They were the places where you learned how to skate, the places where you learned how to play some form of hockey, which, in the '70s, usually involved lots of rough stuff. Given the cold weather climate, it was only natural we got into ice fishing. ... On the canals, the ice could get pretty thick. I don't recall the measurements, but they could get as thick as a foot."

And though you might not at first consider it, the canals would be a great place for angling, as fish prefer underground environments with lots of "structure" for shelter and hiding.

"You're dealing with decades and decades of 'fish habitat': tires, bottles, various industrial debris," he says, breaking into laughter. "There are different species that almost always bite in the winter: usually perch, or some panfish like bluegill, and every once in a while you might pull up a pike." He says he ate the fish "a few times. I didn't try to make a daily habit of it."

"We didn't have really extensive gear," he says. "It was busted-up fishing poles, really anything we could find to puncture holes in the ice. I'll never forget when my old fishing buddy Ralph got something called a spud: a big, heavy, metal spear, essentially, with a weighted wedge on the front end. It was very medieval-looking, and we'd use that to put cleaner holes through the ice."

"Somewhere along the line I picked up a hand-powered auger, which is basically a corkscrew for the ice. There's power ones, but I'm just philosophically dead-set against using the gas-powered auger. I think it's much more meaningful if you use your own hand-power to put a hole through the ice. It means a lot more. I think you connect with the ice a lot more."

Over the years, though, Cornish got better gear and probed the piers and parks of Saint Clair Shores for better fishing spots. "A kid from Detroit couldn't readily and easily sneak into Grosse Pointe Park," he says, "but we did have some success fishing in Saint Clair Shores parks and boat slips and marinas. And the fishing was a little bit better."

Eventually, Cornish rediscovered the joy of ice fishing in his mid-30s, but he has maintained much of the simplicity of his childhood fishing into adulthood. That is to say his version of ice-fishing tends toward the rough and ready, bringing along only the equipment he can pull on a sled. It sets him apart, given the way some ice fishers drive vehicles loaded with bells and whistles out onto the ice. "I won't do that," he tells me. "Not only is it very difficult to save yourself if you're in your car, but you can lose your car. And I have yet to see a bluegill worth losing your car over."

"I think comfort is overrated," he says. "I like to feel directly connected. You can be out there all day if you sink enough money into 'Little Buddy' portable heaters and tent-like shanties, but I think you'd be missing a lot of the point. Your body absolutely adjusts to the temperature after a few hours. It becomes part of the environment. As long as you recognize where hypothermia starts — and remember to turn your back to the wind when it shifts — there's something really hypnotic about being exposed to the elements, being on top of frozen water, looking into a hole, putting something down there to catch fish — and knowing you could conceivably die at any moment."

One of his favorite destinations in the Upper Peninsula is Munising Bay. "It's where I've had probably the greatest successes ice fishing," he says. "Ice-fishing culture is absolutely entrenched up there. It's a way of life. The locals view it as a natural event, not the exception."

How does one know if it's safe to venture out onto the ice? Cornish declares, "There's a time-honored tradition for evaluating if ice is safe or not: If you see other people out there. It's been that way forever. There could be reports of 2-foot ice, frozen solid, no 'honeycomb ice,' nothing weird, and it could still be cracking in different spots. That's just the idiosyncratic unpredictable nature of ice. If you see other people out there, that's the rule of thumb. Generally, though, I don't like to go on the ice if it's less than 4 inches."

Even though Cornish loves going to the U.P. for a few visits, he says he has discovered some lakes in metro Detroit where he can feel removed from the rest of the world in a fairly rural setting. He says Stony Creek Lake freezes up fairly early and holds the state record for white crappies (3.39 pounds), but adds that Lake Minnawanna, a quiet "no-wake lake" surrounded by Metamora-Hadley State Recreation Area, is so completely surrounded by trees "you can tell yourself that you're in northern Michigan."

It all goes back to Cornish's main ethos: It's about communing with the elements, being one with nature, accepting the limited risks, and occasionally enjoying that titanic battle with a feisty pike.

"The skies are beautiful on a big body of water," he tells me, "especially in winter. When you're on ice, the season and the skies blend together. If you focus upon the transcendence of the activity, the comfort's going to be a distant second. It's beautiful. It's gorgeous. The skies are fantastic close to dusk, when you're on the ice in the back half of January. After dark, being on the ice is something really special."

Is this a winter sport or a form of meditation?

"It's highly meditative," Cornish says. "Absolutely meditative. You hear the wind, you smell the ice, the frozen water. There's prismatic light on the ice. Especially if you go a quarter mile out or more you can hear the ice crack, which is just an amazing sound. Not in a splintering, cleaving way, but just enough so there's ice movement. It's a rare experience."

Five-gallon bucket (for holding equipment, fish, and for a seat)

Good boots ("Aside from good clothing, boots are everything.")

Eight-inch auger to drill through ice

$3 worth of insect larvae as live bait