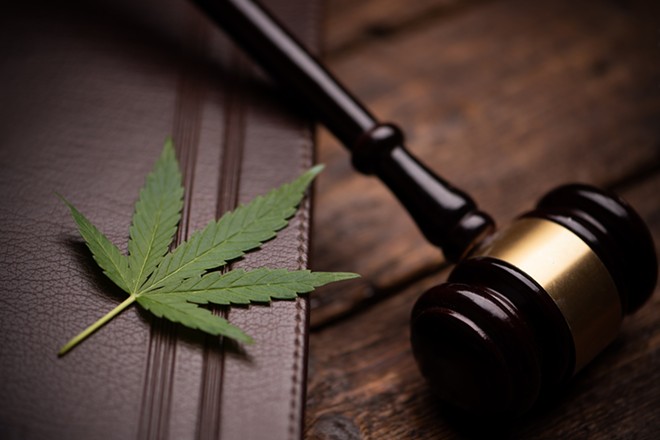 In 2018, Michigan voters approved legalizing cannabis for adults age 21 and older, including possession, use, and cultivation. But what about all the people with previous criminal records for the very same activity now deemed legal?

In 2020, Governor Gretchen Whitmer signed "clean slate" legislation that created a path for residents to clear many pot-related offenses from their criminal records. And earlier this month, the Michigan Attorney General created a website to help people apply to get the convictions expunged.

However, cannabis advocates like Barton Morris, an attorney at the Cannabis Legal Group, says the law doesn't go far enough.

While misdemeanors like possession and use are automatically expunged under the law beginning in 2023, now-legal activities that were previously considered felonies, like growing marijuana, isn't.

"Growing marijuana is now completely legal — you can grow 12 plants in your basement," he tells Metro Times. "Well, if you were doing that before 2018, you could be convicted of a felony. This law doesn't address that."

In December, Whitmer commuted the sentence of Michael Thompson, a Black man who was sentenced in 1996 for up to 60 years in prison after selling marijuana to an undercover cop, along the sentences of three others.

Morris believes there are more than 1,000 Michigan residents behind bars for cannabis-related activity now considered legal.

"Michael Thompson is an extreme case," Morris says. "That guy was in prison for 30 years of a 50-year sentence. It was obvious he needed to get out. But there are other people. I have a guy who's in for two years on a five-year sentence for running a dispensary. We're not waiting 30 years to get out, or three more years. He needs to be out now."

Morris works with an organization called the Michigan Cannabis Freedom Coalition that is petitioning the Whitmer administration to get more prisoners pardoned, but progress remains slow on that front, he says.

"(Whitmer) has responded to our inquiries and says that she's going to set up a meeting, but it hasn't happened yet," he says. "We are putting as much pressure as we can on her to do that."

Even the pathway for expungement that the clean slate law puts forth doesn't go far enough, Morris says, because it requires people to apply – creating a barrier for entry for many people.

"You know, people get scared because they think they're going to have to hire a lawyer, for instance, or don't understand that's why there's expungement clinics to help people, and to get the paperwork sorted out and to go through the process," he adds. "But it's a process — getting fingerprints and going to the court and getting a certified copy of the conviction, the register of action, and then filing the appropriate paperwork and sending it to the appropriate departments like the state, and the state police, and the attorney general and then scheduling and hearing. It's a lot for lawyers, so there's definitely a barrier there for regular people."

Morris points to California, where many people didn't even know expungement was an option months after a similar law passed.

Cannabis-related criminal records create barriers for people, and can harm someone's chances of getting a job or access certain government benefits. Many people, Morris says, begin to just assume it can't get better.

"They're accustomed to it, they're used to it, and so when you're used to something, even though you have an opportunity to change it, maybe you don't feel comfortable knowing that it's going to be changed," he says. "Maybe you're skeptical and end up just leaving it."

One solution would be for county prosecutors' offices to start proactively wiping the convictions from their records. In California, county prosecutors did that, aided by technology that can automate the process by combing through digital records to flag people eligible for expungement. As of last month, more than 140,000 pot-related convictions in the state were cleared that way.

But in Michigan, Morris doesn't see anyone doing it — yet, that is.

If anyone would do it, Morris says it would be Eli Savit, the Washtenaw County prosecutor who has enacted a number of progressive policies in recent months, including no longer charging criminal cases for cannabis and other psychedelic plants.

"He's probably the one that has to take the lead," Morris says.

The other thing that could happen is Michigan lawmakers could draft up new clean slate legislation that goes further.

"The legislature, I think, is the best route in order to address that issue," he says. "And while I understand they're pleased with the progress that they've made with the clean slate act, we still are in a situation that there's a lot of people that are distressed, and it's not fair."

He adds, "What has been done with the clean slate law is literally, like, the bare minimum."