The Detroit Institute of Arts will pay homage to the Tigers with Play Ball: Baseball at the DIA , a rare-for-the-museum exhibition featuring baseball cards, folk art, and other works of art inspired by America's national pastime.

But as DIA curator Nancy Barr points out, while a sports-themed exhibition might be somewhat anomalous for the museum's programming, it really isn't when you think about it. The cards are lithograph prints. A press release for the exhibition compares the museum to the ancient Greek Olympics, which featured the arts alongside feats of athleticism.

And then there's the matter not of artistic merit but of city spirit — this year marks the 50th anniversary of the Tigers' 1968 World Series championship.

"I've been excited about working on (the exhibition)," says Barr, who works as a photography curator and head of the museum's Prints, Drawings and Photographs department. "I was a 1968 fan. And it was nice for me to get out from under my photography hat for a little while and do something a little bit out of the box — not that it's really that out of the box."

Miller's trove is rare; according to the Professional Sports Authenticator database, his collection of T206 "White Border" cards — 524 cards released by the American Tobacco Company between 1909 and 1911 — is ranked the third-best in the entire world. It includes the highly sought Honus Wagner card, widely regarded as the world's most rare baseball card, with only about 60 known to exist. 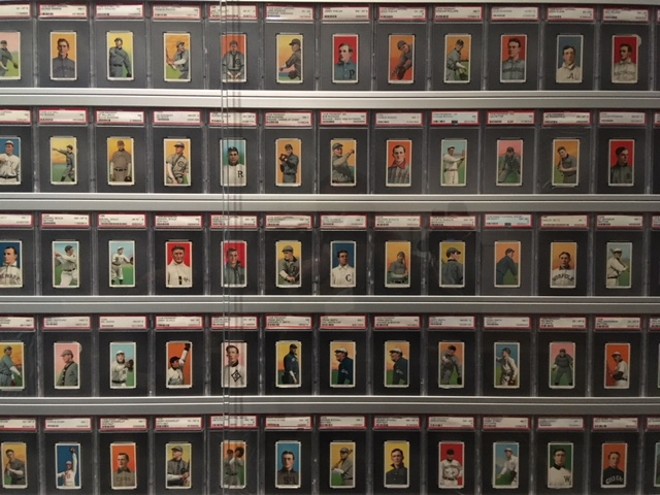 Miller says he was "the typical kid who collected cards" — until they all got thrown out one day. Years later, as a successful attorney, he decided to get back into collecting — and go all the way.

"I thought the cards were beautiful," he says. "It really triggered my competitive nature to see if I could slay the monster and somehow get them all, and get them in really good condition."

And it was that competitive spirit that piqued the interest of DIA director Salvador Salort-Pons. "I remember I told him the Met in New York City has an exhibit of baseball cards, and I believe that my set is better than the Met's," he says. "I said, 'If you wanted to exhibit it, we could beat the Met... and I'd like the Tigers to beat the Yankees.'"

Miller also sees no reason why the cards shouldn't be exhibited in an art museum. "If you look at the cards, these are artistic," he says. "These are lithographs. They were handmade. They have really beautiful colors."

In addition to Miller's T206 collection, the exhibition will also feature other Tigers memorabilia, including Tigers baseball cards, folk art baseballs by artist George Sosnak, and an autographed bat from Tigers right fielder Al Kaline. The exhibition is rounded out by two baseball-themed works from the museum's permanent collection, which include the 1993 large-scale painting Hard Ball III by Robert Moskowitz and a new acquisition by the Guatemala-based artist Dario Escobar, who created an installation of Detroit Tigers baseball bats in the shape of the city's skyline.

The exhibition is just one timed to coincide with the Tiger's 1968 World Series win; The Year of the Tiger: 1968 opens at the nearby Detroit Historical Museum on April 20. And the DIA will soon host another pop culture-themed exhibition with Star Wars and the Power of Costume, which opens at the museum on May 20.

"This whole idea of accessibility and opening up — museums that had a highbrow, clubby, elitist reputation for such a long time," Barr says of the baseball and Star Wars exhibits. "That's a really difficult thing to tackle, and there's no real model for how to do it."

"(Salort-Pons) just felt the door was open to try something new and bring in something new and interesting for everyone, to kind of break down some barriers here," she says. "Museums have all kinds of cultural barriers. But we find when people come once, they're hooked."