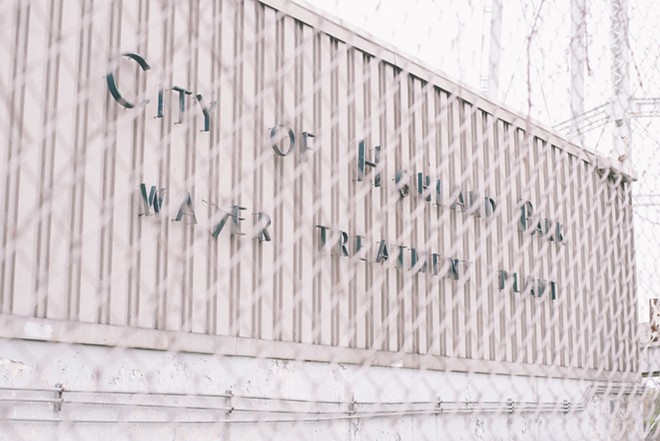 When demolition contractor Homrich Wrecking rolled into Highland Park in summer 2013, Eban Morales joined a cadre of water warriors who stood together to block the company's trucks. Homrich approached homes to cut water off from people who'd defaulted on their utility payments.

Getting an astronomically high water bill in Highland Park, a three-square-mile, post-industrial city inside Detroit, wasn't a farfetched scenario for a long time. Not a gross administrative error, either. Residents have been struggling to pay their water bills for the last seven years.

That's because in 2012, Highland Park's water treatment plant, which was on the precipice of total collapse, was shut down indefinitely due to lack of repairs. The city didn't have the financial capital to rectify these problems, so they began purchasing water from Detroit's Water and Sewerage Department.

In the midst of the management transition, no citizen in Highland Park received a water bill.

The following year, DWSD sued the city of Highland Park for unpaid water and sewage bills, racking up a debt of over $17 million. Highland Park continues to dispute whether this is an accurate estimate with a countersuit, which has now made its way to the Michigan Supreme Court.

To alleviate the debt burden, the city of Highland Park began billing residents retroactively for water usage, hence the charges of thousands of dollars.

Outraged over the charges, Morales, along with local environmental activists, filed a class action lawsuit in 2013, citing illegal billing practices, no due process, illegal shutoffs and rolling arrearages on property taxes.

The case is still pending, Morales says, but the stakes are high. "If the lawsuit doesn't pan out, I might lose my house," he says.

Water affordability is a growing epidemic.

Environmental watchdog groups have recognized rising water rates across the country. Last year, the residents of Marin County, Kentucky, faced a one-two punch of a steep rate hike and serious hazards to drinking water quality. In 2017, The Chicago Tribune reported that low-income Black and suburban consumers were being charged six times more for water than the most affluent areas in Illinois.

Last year, researchers at the University of Michigan found that low-income metro Detroiters could not afford their water bills, with households paying 10 percent of their income each month.

The city's pipes, made of wood, were built in the early 1900s. They have remained active well beyond their expiration date while persistent water main breaks and leaky pipes continue to erode the system.

The city contests that once the underground infrastructure has been restored, then they can work on reopening the city's water treatment plant.

This grand plan comes at a cost. If approved for the loan, it's projected by the city's water department that water rates will increase for residents by 5 percent each year, placing an economic burden on a community of mostly low-income workers and retirees whose annual median income is below $16,000.

If the rates do increase in Highland Park, the water affordability crisis will continue. Failure to pay could lead to a tax lien on residential properties. Some families fear having their children taken away by the Department of Health and Human Services if their home is discovered to be without running water because of state law.

The national increase in water rates correlates with a need to repair aging infrastructure. "Rates are scheduled to rise dramatically to keep pace with needed infrastructure investments," according to the 2016 study "The Invisible Crisis: Water Unaffordability in the United States," released by the Unitarian Universalist Service Committee, a nonprofit, non-sectarian human rights organization.

In its early days, Highland Park was a central hub for the auto industry. In 1910, Henry Ford opened the first Model T plant in the city. It was designed by world-renowned modernist architect Albert Kahn, a Detroit native. It remained there until 1927 when the operations moved to Dearborn.

The water infrastructure of Highland Park was originally conceived for a population of over 50,000 residents. Over the decades, the city's population has incurred a sharp decline, as major industries left, weakening the job sector. In 2001, when Chrysler, the last auto manufacturer in the city, relocated to Auburn Hills, it depleted Highland Park's tax base by 25 percent. Only about 10,000 residents live in Highland Park today.

The two-story brick homes still standing are remnants of the rich history of that era. Those that have remained said they're steadfast in establishing their roots here. Highland Park feels like a close-knit village now, they say. Most people who live here are from an older generation; the city has had trouble attracting an influx of new residents and businesses, but there are hidden gems peppered throughout the blocks.

Nandi's Knowledge Café is an epicenter for Black thought and culture, hosting an open mic every Thursday night that features local artists, poets, and performers. The Woodward Bar and Grill, which opened last summer, is gaining a reputation as the new neighborhood haunt to grab a drink after work.

Carol Miller, a professor of civil and environmental engineering at Wayne State University, says that managing the water system becomes more difficult when the population experiences a significant dip.

"We've designed very large, centralized systems where our very large plants are distributing water to many, many people, as opposed to having what would be called decentralized systems," she says. "Where you have much smaller plants serving much smaller numbers of people so you can isolate issues with the system to smaller areas rather than having a problem in one area impacting hundreds of thousands of people."

When the workforce devoted to building and maintaining the water infrastructure is underdeveloped, and fewer people are using the system, in general, the cost of water use can potentially increase.

"When the number of people using the system goes down, and you still have a plant and a large infrastructure, certainly the cost per person has the potential to increase, " Miller says.

In the '90s, when major industries like Chrysler moved their headquarters elsewhere outside of Highland Park, the tax base was depleted. The lack of revenue generation for the municipality has led to the cutting of city services.

There is only one running public school, Highland Park Renaissance Academy. Maureen Taylor, the chair of the Michigan Welfare Rights Organization, says that the historic downturns that befall Detroit cross-pollinate with smaller, often-overlooked urban areas like Highland Park or even adjacent Hamtramck.

There was once serious debate of dissolving Highland Park altogether over the water debt.

"The biggest issue that all of these cities have, including Highland Park, is the loss of employed persons that are connected to jobs that are paid minimum wage or higher," Taylor says. "Economics are a serious issue."

These are long-standing problems still unresolved.

"We said the pipes are 80 years old, some are 100 years old. There's gonna be a time when they start to leak," she says. "We didn't think we'd be talking about water shutoffs 15, 16 years later. I thought it would be a fast campaign."

Since 2015, Wade Trim and Metro Consulting Associates, two private consulting companies, have since overtaken management of the city's water department. The distribution of the water bills has improved, but water activists contend that switching the billing periods from quarterly to monthly increases the potential for defaulting on a water payment.

"The water situation in Highland Park is dire specifically because the water bills go out monthly. If you are behind in the water bill for two months or $150 in arrears, you're subject to get your water shut off. That's never happened before," Taylor says.

Taylor also says low-income communities of color get marginalized, and stay marginalized, because of the racist narrative of failed Black leadership and the lack of community culpability.

That prevailing attitude and the absence of equitable state intervention to assist Highland Park exposes a disparity between affluent and low-income areas.

The same year Highland Park's water treatment plant was closed, Ann Arbor, a prestigious college town and burgeoning tech hub, was approved for a $109 million loan to fix its plant. This was under then Gov. Rick Snyder's leadership.

When Angela Lugo-Thomas, a 19-year resident of Highland Park, acquired a vacant home in the area, she had to make back payments on that property in addition to her water bill of $103 per month. Although she qualified for a payment plan, she says paying a flat rate has its drawbacks.

"Our bill never changes," she says. "It doesn't matter if you use more water or less water. If we were trying to conserve, it wouldn't matter."

Like her neighbors, she was originally charged $4,000 for using water. She's able to get by, but is fully aware of the financial insecurity of her community.

"Most of the people in my community are poor," Lugo-Thomas, says. "They are barely making it. I worry about what happens to them and their families."

On a national scale, several prominent studies outlined solutions to the water affordability crisis, citing Highland Park and a host of other U.S. urban and rural communities as ground zeroes where these changes need to be enacted.

In 2015, a package of bills that comprehensively addressed the water crisis with bipartisan support, was proposed to the Michigan state House and the Senate, respectively. One of these bills, House Bill 5097, sponsored by Democratic state representatives Stephanie Chang and LaTanya Garrett, proposed the creation of a water rate affordability program, which would calculate charges for water based on household income. It did not get passed the Committee on Local Government.

Taylor says that water should be treated as a basic human right, not a commodity. And just because Highland Park has transformed into a smaller community doesn't mean service quality should be eliminated or their needs ignored.

"Water has to be attainable, and it has to be accessible," Taylor says. "If there is one person living in [Highland Park], that person still has to have access to clean water and sanitation."

Eleanore Catolico's reporting is brought to you by the Race and Justice Reporting Initiative at the Detroit Equity Action Lab, a program of the Damon J. Keith Center for Civil Rights. This initiative is funded by the Knight Foundation, Ford Foundation, and Community Foundation for Southeast Michigan.