Will football go to pot?

The NFL's coming conflict on cannabis 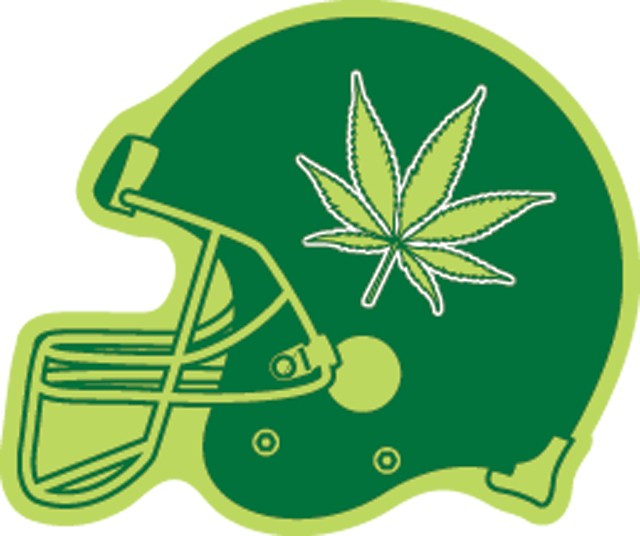 Bob McNair, owner of the Houston Texans, resembles an outsized caricature of a 21st-century pro sports boss. He's a 75-year-old Republican Party mega-donor who made his fortune by selling his energy corporation to Enron in 1999. (Give him credit for timing.) That's what's made Mr. McNair's recent comments all the more interesting. After saying he would never have a "persistent user of drugs" on his beloved Houston Texans, McNair made a point to add, "I'm not talking about someone who smoked marijuana."

This might sound about as radical as a Brooklyn Without Limits T-shirt, but for decades the NFL officialdom has discussed marijuana and players who "do pot" like they were bit players from Reefer Madness. In this light, McNair's statement is more than tacit acceptance of something players have been doing for decades. It's connected to weed's recent legal emergence from "the cannabis closet."

State referendums last month legalized small amounts of marijuana for personal use in Colorado and Washington state. These votes threaten to raise a massive legal and public relations headache for the NFL. Two of their teams, the Denver Broncos and Seattle Seahawks, now play in states where marijuana is legal. This could have implications for where players choose to go in free agency as well as how players desire to treat their injuries. As a top player who asked to remain anonymous said to me, "I'd rather use marijuana edibles or vaporizer to manage pain over prescription pain pills. Much less addictive and less harmful to kidneys and liver."

The NFL is trying to nip this, please pardon the expression, in the bud. NFL spokesman Greg Aiello didn't even let the Election Night confetti fall to the floor before he told USA Today, "The NFL's policy is collectively bargained and will continue to apply in the same manner it has for decades. Marijuana remains prohibited under the NFL substance abuse program. The Colorado and Washington laws will have no impact on the operation of the policy."

In addition, NFL.com's Gregg Rosenthal made it even more crystal-clear: "Broncos and Seattle Seahawks have been warned. 'It's legal' won't be a valid excuse."

Aiello's statements sound very iron-clad. The problem is that even by the NFL's own guidelines, they are not actually true. As Mike Florio on profootballtalk.com pointed out, "The policy prohibits only the 'illegal use' of marijuana. While players may not abuse legal substances like alcohol, legal drugs and alcohol may be used."

Aiello is of course correct that marijuana is on the banned substance list, the content of which is collectively bargained with the NFL Players Association. However, the other legal prescription and nonprescription drugs on that list like ephedrine and adderall have a performance-enhancing as well as a health-endangering component. They can help you train harder, put a brutal strain on your heart and, if taken outside a doctor's care, be very dangerous. Unless your name is Joey Chestnut and your goal is winning a hot dog-eating championship, there is no "performance enhancing" aspect to ingesting weed, and unless your munchies preference involves saturated fats and cholesterol, your heart will be just fine.

Unspoken, amid the jokes about Denver truly playing in Mile High Stadium, is the fear in the NFL's front office that a league-wide relaxed marijuana policy in accordance with state laws would be a public relations nightmare. In the bizarre macho ethos of the NFL, alcoholism is ignored, pain killer abuse is encouraged and other violent, off-field behavior is winked at because these are byproducts of the kind of destructive masculinity that the NFL markets every Sunday. Marijuana, in contrast, is for hippies, beatniks and long-hairs.

In reality, weed wouldn't turn NFL players into extras from Half-Baked. Players will use marijuana either to wind down after a game, as a healthier, less addictive alternative to alcohol, or as a way to manage their pain. This last point is particularly explosive for the NFL. Amid lawsuits, suicides and documentaries, there is unprecedented attention being paid to the physical toll players have to endure, particularly concussion and brain injury. Medical marijuana is recommended by doctors for headaches, light-sensitivity, sleeplessness and loss of appetite — all of which happen to be symptoms associated with concussions. The idea that the league would deny a player their legal pain relief of choice seems barbaric. It's their pain and their right to treat it however they see fit.

One active NFL veteran who lives in a state where there is legal medicinal marijuana said to me, "A part of me always wanted to be the first player to test positive, then be able to present [Roger Goodell with] a prescription from my physician and dare him [to do something]."

A player will emerge to challenge the NFL's policy on grounds that it inhibits their ability to treat their own pain. The NFL will almost certainly go Reefer Madness in response. The NFL thinks they'll have the public on their side, but they might be in for a rude awakening. Maybe Bob McNair can meet Roger Goodell in Seattle, roll a fat joint and say, "Goodie? You need to chill the hell out."

David Zirin writes for he Nation, where this piece first appeared.
Send comments to letters@metrotimes.com.