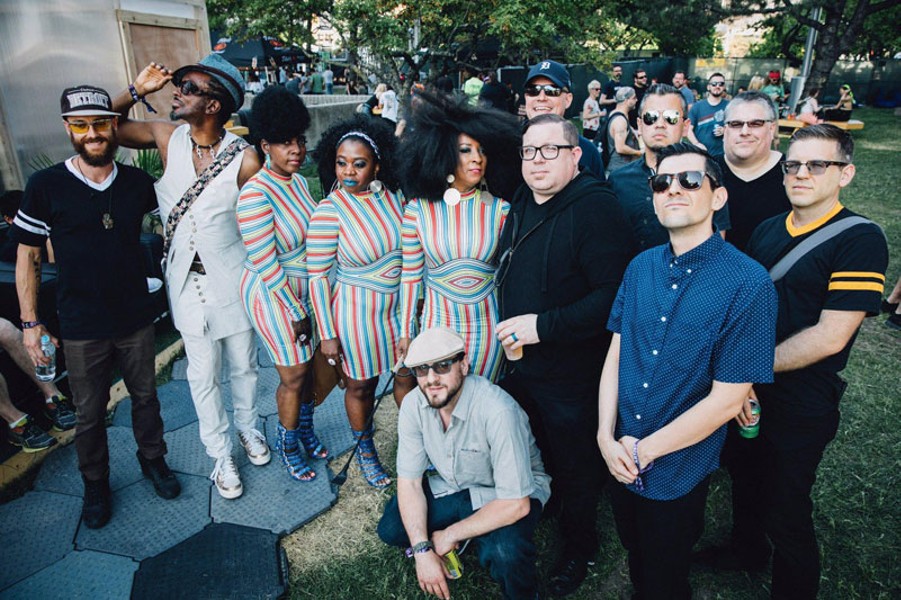 Detroit's powerhouse funk group Will Sessions has teamed up with Amp Fiddler (Parliament-Funkadelic, Was (Not Was), Mahogani Music) and soulful vocal trio Dames Brown for a decade-defying record that tells the story of young love in Detroit. The One is a product of spontaneous collaboration between two generations of musicians deeply rooted in funk, and putting their own modern twist on the funk tradition.

Though Sam of Will Sessions (trumpet, keys) and Amp Fiddler had been working together for a while in a more constricted setting — making music for television and advertisements — The One is their first time creating a cohesive body of work together. It happened naturally and in the spur of the one day after the two had been working on a commercial project.

"I had this track and we had been talking about collaborating for a while, so we listened to it and... he just did it," says . "His lyrics on that song are what he sang the first time the mic was on."

"I heard that track and fell in love with it," adds Fiddler. "So we wrote that song right on the spot that day and he put his magic on it and that kind of did it."

The track the two are referring to is "Seven Mile," a song about reaching a bump in the road in a relationship, set to the landscape of some of the city's most trampled streets, I-75 and Seven Mile. This song set the tone for the entire record, which was built around the theme of a man searching for the love of his life in Detroit. From there, the duo came up with song titles that fit into their and the writing process continued in the impromptu way it began.

"It was a really fun process for me working with Amp," says . "He's really in the moment and I'm a planned-out kind of a guy. It forced me to abandon any thought of what I was going to do that day."

While the album was built around a fictitious love story, both Beaubian and Fiddler injected snippets of their own lives into the songs. "We wanted to have some of those real moments that happen when you're in a relationship, the good and the bad," says . But even songs like "Who I Am" and "Reconcile" that touch on deeper parts of a relationship a danceable groove. The expert musicality of everyone involved is evidenced throughout the whole record, from Tim Shellabarger's rock-solid bass lines to Fiddler's synth chops and timeless vocals.

Although the record has a big studio sound, the entire album was recorded between and Fiddler's basements. This was no simple feat considering Will Sessions' nine members — , Shellabarger (bass), Bryan Arnold (drums), Jason Bonaquist (drums), Ryan Gimpert (guitar), Eric Kacir (percussion), Matt Martinez (trombone), Jimmy Smith (trumpet), Justin Jozwiak (sax) — all played on the record, along with the three Dames Brown members (Lisa Cunningham, Teresa Marbury, and Athena Johnson), as well as Fiddler and Beaubian themselves. says the band broke up the recording process in layers, starting with percussion and then bringing in band members in groups to flesh out the sound.

"We didn't need a big fancy studio," says. "It's about the people who were singing on it and the arrangements. That stuff to stands out more than what you're recording on. Things will come together if the music's there."

At its core, The One tells two stories: one following the trials and tribulations of a budding romance, the other of a long-standing legacy of Detroit musicians, coming together to make something completely original and uniquely Detroit.