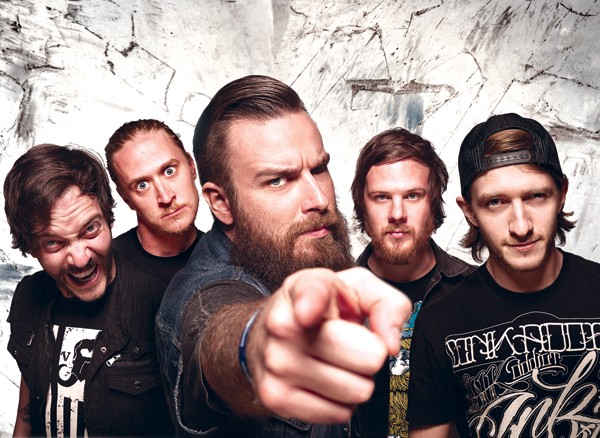 The band Wilson is so nondescript that, when pushing play on a Bandcamp page, you could hear literally anything; the uninitiated won’t know what hit them. Wilson could be a solo R&B guy or an emo band. It could be a jazz cellist or a folk banjo dude, but no — oh no — the title of the new album gives a little more away: Full Blast Fuckery. OK, now we know this isn’t an R&B guy, but it could still be an angry folkie … unlikely though.

In fact, Wilson is a ferocious, hairy animal of a rock ’n’ roll band with unhinged elements of punk. The riffs are as big as the beards and you can’t help but assume that copious amounts of alcohol are being consumed — with a don’t-give-a-shit ’tude.

The five men of Wilson are the kind of guys you see leaving the bar after everyone else, jeans covered in piss, singing Sabbath tunes at the top of their voices. They’re the drunks burying their faces in the barmaid’s cleavage. Wilson is an ugly, glorious mess of a band.

The band formed in 2010 when founding member Jason Spencer was attending Michigan State University. He remains the sole founding member, with vocalist Chad Nicefield coming into the picture in late 2010, when, according to Nicefield, he wanted to take his partying a bit more seriously.

“We started to replace members with players in the Detroit area and then the band eventually relocated to metro Detroit,” says Nicefield. “Our mission from the beginning was to provide the best possible soundtrack to what we would consider the last Friday night on earth. We’re here to destroy your crappy night and rebuild it into your crappy future.”

The band, completed by Kyle Landry, Puhy and James Lascu, has a rough edge that sits comfortably, if impatiently, alongside other, heavier bands currently blessing the Detroit music scene.

On one hand, Wilson is a bit harder than other heavy bands, but on the other is a bit more accessible. “We have love for Detroit and all the great art it continues to pump out,” says Nicefield. “It has its ups and downs and sometimes you just have to dig a lot harder to find the commonality in it all, but it’s there.”

The singer is right, Wilson can play with bands as diverse as the Suicide Machines, Bars of Gold, We Came as Romans, Black Dahlia Murder and Fireworks, and never appear at all out of place. Nicefield describes the band’s sound quite beautifully.

“We sound like 1,000 bastard swords swinging with vigor, whisking through the air as they are about to slice through 10 24-packs of PBR bottles,” he says. “We sound like those broken bottles strewn about the hardwood floor that you found yourself awakening upon last Sunday morning. We sound like your weekday’s worst nightmare. We are Rock ’n’ Roll.”

While Wilson suffered from a few bad shows at the beginning thanks to low turnout, the guys haven’t seen one in a while. Known for its consistently deranged performances (there’s some predictability in the unpredictability), the band considers this past August’s “Dirt Fest” in Birch Run (alongside the likes of Sevendust, Pop Evil and Trapt) to be its best show thus far.

“Playing in front of 5,000 people and seeing their faces as Kyle and Jason hung upside-down from the stage scaffolding, spitting whiskey from their mouths, sure was some sight,” Nicefield says.

Wilson, currently with a debut EP and that Full Blast Fuckery full-lengther to its name, is on the road in icy Canadian climates. According to Nicefield, the band nears death every night, having almost hit two deer, an elk and a fucking ram. The evenings, which are typically filled with debauchery, more than make up for the animal-related close calls.

The downside to the band being on the road right now is that they will miss much of the festive period. Some might actually consider that a hot benefit, but Nicefield is a festive soul and he hates to let down his loved ones.

“I used to be a very festive Christmas guy, but now I just kinda want it to be over so I can feel like less of a letdown to my family and friends,” he says. “Not being home during these holidays can really suck and the people you love really get disappointed, which makes you loathe the holiday even more.”

Not that something as puerile as Christmas is going to stop these head-cases. You get the impression that Wilson is in it for the long haul — lifers — and if they have to upset a few paper hat-clad family members along the way, then so be it. Just so long as they don’t miss a show. On Christmas Day, they might be eating at a Denny’s halfway up a fucking mountain. Who knows?

“I read a lot of Chuck Palahniuk on the road – it keeps my brain witty while stuck in the van for long periods of time,” Nicefield says. “Netflix has become our newest obsession. We watch a lot of comedy. TV is pretty much nonexistent so we start watching shows that people rage about all over the social sites. I just watched Breaking Bad for the first time this October and finished it all on the road. Now I am on to Sons of Anarchy.”

Frankly, whatever gets them through those freezing cold journeys and elk attacks. While it’s likely not easy being on the road in a shitty van during the winter months, the men of Wilson ain’t complaining. For them, it’s all about forcing their sweaty armpits into the faces of rockers — in as many different cities as possible.

It’s about preaching the aggressively exuberant gospel while drinking profusely, passing out, getting up and doing it all again. Some alt-entertainment on the bus passes the time nicely.

On Dec. 27, Wilson plays the Black Christmas show at the Majestic, under headliners the Suicide Machines and the Black Dahlia Murder, and alongside the likes of Mustard Plug, Fireworks, Koffin Kats and PT’s Revenge. It’s a huge punk and metal extravaganza, perfectly placed in that gap between Christmas and New Year’s.

“Remember when I talked about those bastard swords and broken glass and partying like it’s your last Friday night on earth? We’ll be doing exactly that,” Nicefield says. When this tour’s over, Wilson will be heading to the much sunnier climate of the Bahamas on the Shiprocked tour.

“It’s a four-day cruise on the seas,” Nicefield says. “We are really pumped for it. Then we will be back on the road for a few dates with Sevendust and then back to play the Compuware Arena in Plymouth Township on Feb. 21 for Mega Fest. 2014 is going to be a big, busy year for the ol’ fuckery train known as Wilson.”

Of that we have no doubt.