Tap bets on being a better sports bar 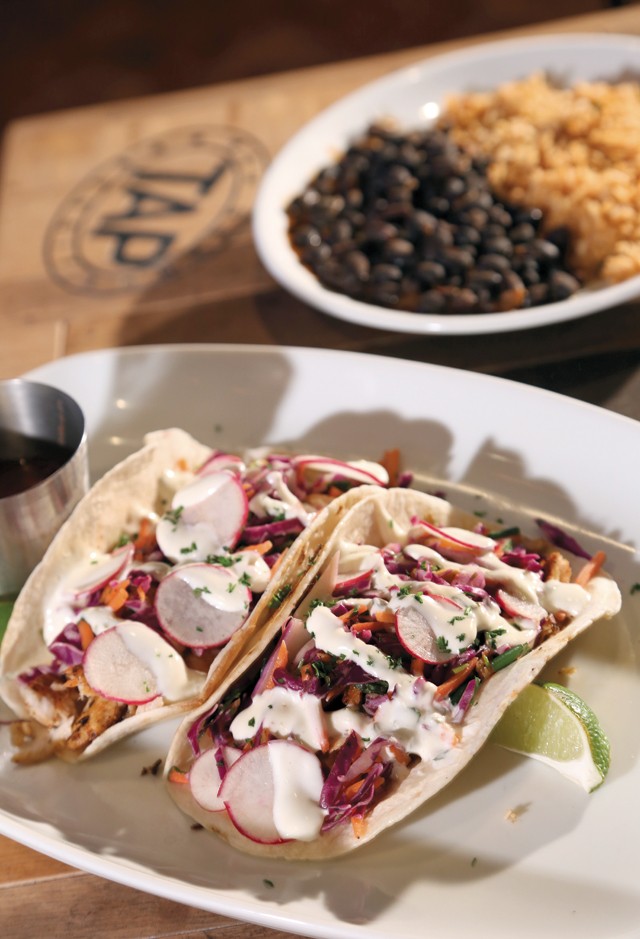 Inside the MGM Grand Detroit Casino

"We wanted to build it like a local's place, ... your corner neighborhood watering hole where people tell stories and put up pictures of things that were going on at the time."

That said, with almost 300 seats, a private dining room for 100, and a gazillion flat-screen TVs, it's neighborhood sports bar writ large. Real large. Even the collection of sports mementos on display is incomparable, much of it from the city's original and iconic sports bar, Lindell A.C.

As you'd expect from a casino sports bar, Tap is high-energy dining taken to the extreme. We counted more than 40 flat screen televisions, a number that's always changing thanks to the jumbo set, which can display one large show or several smaller ones. There are neat little details, such as the lockers beneath the bar.

Peruse the menu and you can't miss how much stuff is made in-house at Tap, like the pickles, the barbecue sauce, the meatloaf. We were often pleased to see sides that seemed to have been made with human hands in an actual kitchen and not dumped out of a food service bag.

Of course, in a sports bar, the appetizer menu is of special importance, providing the food that allows a diner, usually a man, to eat with one hand while keeping one-and-a-half eyes on the game. Tap's menu doesn't disappoint, with the usual suspects, including quesadillas, sliders, stuffed potatoes, chili-cheese fries, beef nachos, Detroit house nachos (very large), barbecue bites, pretzel sticks and fried pickles. Some of the starters would seem to require more attention than a tight game would allow — such as calamari, spicy tuna, gyoza, pad thai lettuce wraps, spinach-artichoke dip with tortillas, and pita wedges with hummus — but sometimes sports agnostics or ladies get dragged along.

Among the appetizers, the most unusual was the deep-fried mac 'n' cheese. We're talking mac 'n' cheese fried into breaded sticks, actually, squared off into little timbers, given a breading dusted with herbs before being dunked in the fryer. The interior isn't very cheesy, but, hey, that's what the cheese sauce it comes with is for, right? (We actually liked it better with the barbecue sauce.) Anyway, this is about as deliriously rich as bar food gets.

Impressively, Tap's chicken strips are actual pieces of chicken, not breaded tenders, which is actually a refreshing change of pace. They're given just a light dusting of powdered heat and they're ready for a dollop of ranch sauce. The hot wings are nailed nicely, just the right amount of heat and not overly large or breaded.

My co-diner happened to be fussy about poutines, which could be called the French-Canadian answer to chili-cheese fries. A poutine is a Quebecois creation in which fried potatoes are placed over cheese curds, slightly melting them, before the whole thing is drizzled in gravy. He claims that several new restaurants' iterations of the dish are inauthentic and disappointing. But he tucked into Tap's version without complaint; the restaurant's rendition used good, crispy French fries, half-melted yellow curds and topped all with not only thick pork gravy but braised pork shoulder. This amped-up version, my co-diner said, may not be classic, but is not uncommon in Canada, and he pronounced it excellent. And, for an $8 appetizer, the portions are generous.

The menu also has a good selection of manly burgers, pizzas, wraps and sandwiches, as well as salads and soups. The clam chowder we had bodes well for those choices, as it had a nice thickness and colorful bits of clam.

As expected, the entrées are crowd-pleasers. There are Italian choices, such as house-made ravioli, spaghetti and meatballs, chicken Parmesan, and grilled shrimp and linguini. Lighter fare includes lemon-grilled salmon, fish tacos and fish and chips. But many of the mains are heavier comfort foods, such as house-made meatloaf, an open-faced pot roast sandwich, fajitas, ribs, fried chicken and smoked chicken. Then there are the serious meats, including not just top sirloin, hickory-grilled New York strip, porterhouse and rib-eye, but filet mignon wrapped in smoked bacon!

We opted for a sampling by getting Tap's smoked barbecue pork rib rack and house-smoked chicken combo, which includes a half rack of ribs, a quarter-chicken (leg and thigh) with mashed potatoes and vegetable. For this dish, the kitchen got everything right. The ribs weren't overpowered by the sauce, which tasted of cayenne with vinegar accents. The chicken came with a crisp skin and all the meat permeated with rich barbecue smokiness. Even the sides were good, with real potatoes given a light mash and green beans al dente. But, even if everything was perfect, is $22 too much to pay for getting it right? Why not? You'd do it in Birmingham without blinking.

The beer selection is pretty good, with 36 beers on draft, 12 of them from Michigan. No huge surprises here, but it's welcome to see one of our casinos making the effort to root a joint in local history — and serve local suds while they're at it.