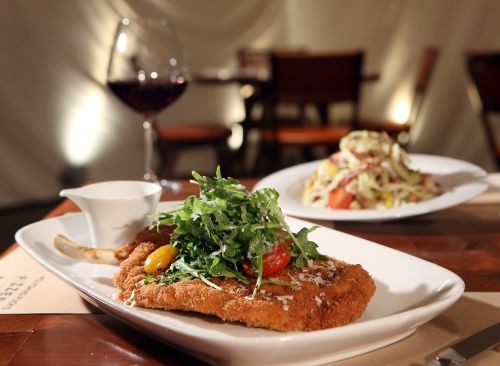 Wolfgang Puck Pizzeria & Cucina
inside the MGM Grand Casino
1777 Third St., Detroit
877-888-2121
wolfgangpuck.com
Handicap accessible
Pizzas, starters & salads: $12-$28
Pastas & entrées: $19-$39
Open 5-10 p.m. Sunday, Wednesday, Thursday; 5-11 p.m. Friday-Saturday; closed Monday & Tuesday
Last year, the MGM Grand’s restaurants played a game of musical chairs, as the contracts for Michael Mina’s Saltwater and Bourbon Steak restaurants came to a close and were not renewed. The cool, modern space formerly occupied by Wolfgang Puck Grille was transformed into a new casual beer-and-burger restaurant called Tap, while Puck opted to get rid of the Grille and occupy both former Mina spaces with two distinct restaurants. The logic behind this was that the Grille’s concept was too “confusing” for diners — i.e., was it a pizzeria or a high-end restaurant? The former Bourbon Steak now houses Wolfgang Puck Steak (because every casino needs a steakhouse, naturally), and Saltwater is now Wolfgang Puck Pizzeria & Cucina, serving Puck’s renowned wood-fired pizzas, pastas, and a small selection of entrées.

Unlike the former Grille, which had an open kitchen and a fun, less formal ambience, the Pizzeria & Cucina feels a bit out of place in so grand a space. Very little of the decor has been changed since it was Saltwater; although it’s an attractive room, we found ourselves wishing for more of a cozy trattoria environment. However, semi-private booths lining two walls do provide an option for those seeking a little intimacy.

Going with a group is probably the best way to experience the menu, as many items are geared toward sharing. We opted to share pizzas, salads and starters with friends, to leave a little room for our main course, although the food was all so tasty that it was difficult to pace ourselves. The meal begins with a bread basket accompanied by a garlic- and herb-infused olive oil and a white bean purée; you’ll definitely want to try these, but resist the temptation to eat more than a few bites unless you have a mammoth appetite; there’s much more deliciousness to come.

Any of Puck’s pizzas will put a smile on your face, but meat lovers shouldn’t miss the Italian sausage pizza or the soppressata, salami and pepperoni pizza with sweet and hot peppers. As with all the ingredients here, the quality of the meats is outstanding and will satisfy the most discerning porkophile. Among the vegetarian options, the mushroom, leek and goat cheese pie was our top pick. Paired with the zesty, slaw-like antipasto salad, you could easily make a meal out of just pizza and salad, but we pressed on, determined to explore the menu’s bottom half.

The entrée section, though just six items, nonetheless offers some attractive options for carnivores, including a rib-eye steak, veal scallopini, and a couple of classic Italian chicken preparations (piccata and parmigiana). Although what I tasted from my co-diners’ plates was expertly prepared, my two favorite dishes happen to be vegetable-based and on the pasta menu: the fettucine with field mushrooms, and the seasonal summer pasta, agnolotti with sweet corn and goat cheese. Mushroom lovers will swoon over the perfectly chewy, house-made noodles with a rich, decadent sauce, which contains several varieties of earthy wild mushrooms for an intensely deep and earthy flavor. On the (slightly) lighter side, the sweet corn agnolotti was one of the most delightful dishes I’ve eaten in recent memory. Agnolotti are little “pillows” of house-made egg pasta, filled with a sweet corn and mascarpone purée; these are presented in a buttery golden sauce with caramelized kernels of sweet corn, chives, and just a touch of goat cheese.

The wine list has many excellent wines by the glass, with prices ranging from a moderate $9 on up past $20. Beer drinkers also have a good set of options, but you may want to bypass the specialty cocktails, which we found overly sweet and unbalanced (or enjoy them after dinner, when you might want something sweet). Sadly (or not), there were so many great savory options that we never made it to dessert, but if the desserts are anything like the rest of the food, I’d have no problem recommending them without reservation.

As to the reasoning behind ditching the Grille in favor of a two-restaurant approach, I’m not sure Puck has resolved the confusion issue, at least on the Pizzeria & Cucina side. The food is beyond reproach, but the concept still feels a bit awkward. A budget-minded diner could certainly go in with friends, share pizzas and salads or pasta and eat quite well for a fairly reasonable price, but the fine-dining ambience doesn’t lend itself to this kind of convivial eating. Inconsistent details contribute to this dichotomy; for example, you’ll find simple paper placemats, not white linen, but your silverware will still be changed out between every course. Casino-goers who just want a pizza and a beer may feel put off by these formalities. However, if food is more important to you than atmosphere, the Pizzeria & Cucina should not be missed for the superb quality of its cuisine.