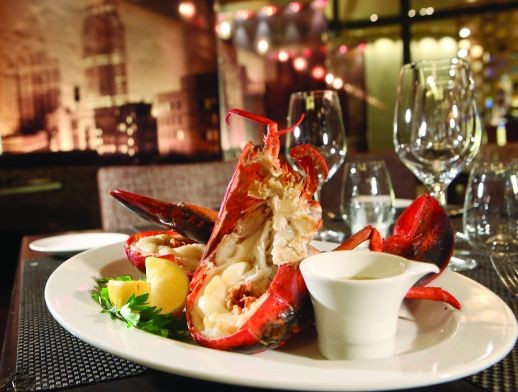 Guests must be 21 and older.

According to one of the diners in our group, the MGM Grand Casino, in which Wolfgang Puck Steak is located, is the best of the Detroit casinos. The decor is sleek and modern, with lots of wood and metal. Wine is displayed behind glass and the whole collection is visible. The kitchen is also behind glass, all the action observable. In addition to the tables and booths in the open floor plan, private tables in wooden partitions are tucked away at the back of the restaurant.

Our group started with steak tartare, a real treat, as the dish is not commonly found on menus anymore, even in steakhouses. It was made with the traditional accompaniments: ground beef mixed with onions, capers, mustard and a fresh aioli, and served with a lightly toasted thinly sliced baguette. The baguette slices were gone well before we had finished all of the tartare, but the generous bread basket filled in nicely. The butter rich flavor of the meat and aioli balanced well with the sharp mustard, and also served as an excellent spread on the pretzel rolls.

All dishes on the menu are served à la carte. We decided that it made the most sense to each order the entrée of our choice and order an assortment of sides to share. We carried this democratic spirit over into our meat choices as well, ordering beef, lamb, and chicken.

Our plump and juicy rotisserie chicken earned the right to hang out with the steaks. It must have been all that time it spent lounging around free range. What better way to end a cozy farm life than slathered in a rich, dark, roasted chicken jus and sautéed mushrooms? I hope to go that way myself!

We also tried the Colorado lamb chops, two fleshy, bone-in chops, which came with our selection of sauce — peppercorn — and a fine choice it was. The sharp tart sauce mellowed the slightly gamey flavor of the chops. We ordered them medium and they came cooked to those exact specifications, but such nice cuts of meat would have been better rare to medium rare. Though they were a tad dry, the flavor was still excellent, and the meat closest to the bone was juicy and sweet.

The star of the meal was, of course, the beef. We ordered the 8-ounce filet mignon medium rare and that’s what we got, pink all the way through. It was a great cut of meat, every last bite moist, flavorful and tender. We also paired this with the peppercorn sauce. This sauce would have done well to cover up a subpar steak but, after trying a few bites dressed in sauce, we decided this steak was better all on its own.

For the sides we ordered garlic spinach, three-cheese mac and cheese, and brussels sprouts with confit bacon and gold raisins. We placed all these sides in the middle of the table to share equally but some clear winners emerged.

The brussels sprouts with confit bacon and gold raisins were gone well before the meal was over. If cooked incorrectly, brussels sprouts can be excessively bitter and soggy. These were neither. The sprouts were firm with a crispy, roasted crust.

The three-cheese mac and cheese was creamy with a gooey center and golden crust. Though it is on the list of better mac and cheese dishes available in Detroit, it is incredibly rich: We had had our fill after just a few bites. It was excellent though, warmed up the next day for lunch, proof of its quality.

The garlic spinach was as good as garlic spinach can be, nothing too exciting. It had a simple flavor and wasn’t soggy. It was a nice respite for the palate in between bites of meat.

We relaxed our stomachs with silky cups of double espresso and calming herbal tea, all of which paired nicely with the trio of desserts we ordered, banana cream pie, molten chocolate truffle cake and sorbet.

The banana cream pie was a pleasant surprise, its spiced graham cracker crust and crème fraîche whipped cream made for a lighter-than-air dessert that was gentle on the sweetness and heavy on the real banana flavor.

The sorbet dish was great palate-cleanser after a rich meal. The dish came with three scoops — one raspberry, one passion fruit and one pear — served with fresh strawberries, blueberries, and mint. Though both the raspberry and the passion fruit were delightful the pear was by far the best flavor, crisp and refreshing.

Diners with peanut allergies should be warned that peanut oil is used in the preparation of the cuisine.

The meal was a bit pricey. Our meal for three came to the grand total of $237 and none of us ordered drinks. All members of our group felt it was worth the treat of fine dining service and great food.