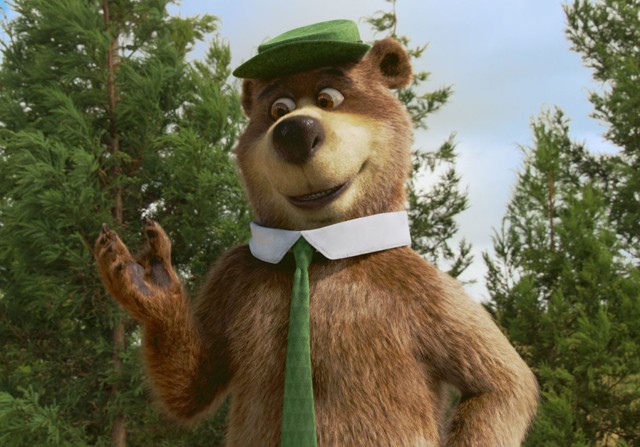 There are two types of people likely to read a review of Yogi Bear, compliant parents curious what sort of mess they're getting themselves into, and sadists who revel in reading about a film critic's personal agony. To the latter let me say, I wouldn't give you the satisfaction, and anyway I've endured far greater Hollywood horrors and bounced right back for more (I'm looking at you Fat Albert). To the former, well, I didn't tell you to have kids in the first place, but it is my duty to report that Yogi Bear is a stupefying, butt-shifting exercise in extreme patience, but is not quite as torturous as many of its wretched, soulless, kiddie matinee peers.

This is not in any way to describe the film as objectively "good," it's far from it, but to damn the whole endeavor with the faintest of praise, it at least has the decency to keep the fart jokes to a minimum. Unlike the heinous Alvin and the Chipmunks revival, and turning the other cheek to the brief abuse of "Baby's Got Back," Yogi Bear is largely free of the tired, postmodern, pop-culture, self-referential smugness that has tainted kid flicks since Shrek. Mostly this one sticks to the classic formula, with an ursine rascal and his bowtie-sporting pal scheming to snatch up tourists' picnic baskets, under the watchful-but-friendly eye of the local park ranger.

Before we deify the source material, let's recall that Hanna-Barbera studios made a mint on TV by churning out cartoon shorts far, far cheaper than their big screen predecessors. The original Yogi was rendered in a "limited animation" style that displayed about as much natural fluid movement as Joan Rivers' Botoxed face. The CGI-and-live action update is more elaborate and frantic, but isn't much of an upgrade, missing the inexplicable, low-grade charm of the '60s classics. The film rattles from pratfall to sight gag in a haze like a twice Xeroxed collage of half-hearted notebook scribbles. The plot, involves Ranger Smith (the tapioca-bland Tom Cavanaugh) his new conservationist girlfriend (a peppy Anna Faris) and the bears (Dan Aykroyd and Justin Timberlake in career nadirs) teaming up to stop a crooked politician from selling logging rights to their beloved Jellystone park. The linchpin of the plan is to find an endangered "frog-mouthed turtle" to ensure the park's nationally protected status, though it occurred to me in my near-coma state of viewing, that a pair of talking fucking bears would probably do the trick. These are the things I ponder just for you. Never forget it.