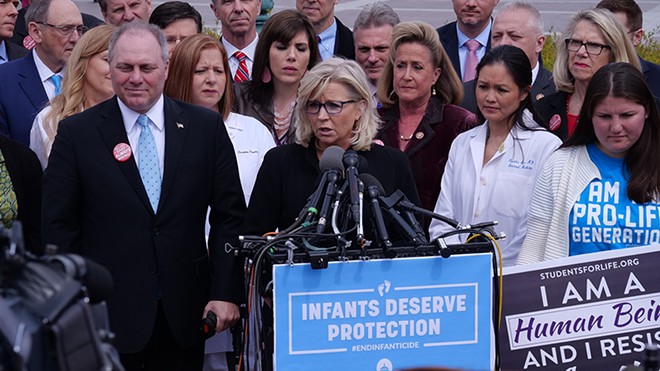 Don't put Liz Cheney on a pedestal. She's an unreconstructed neocon foaming at the mouth for a new cold war with China. Her heroism involves acknowledging the truth and saying it out loud — in a sane world, a low bar, not something that warrants an ovation.

But this is not a sane world. And Cheney's stance is remarkable because, as low as that bar is, the rest of her party isn't even trying to clear it.

Cheney, a Wyoming Republican and scion of a Sith lord, had the temerity to say that Donald Trump lost the election, vote for his impeachment for inciting the Capitol riot, and implore her fellow partisans not to follow his brand of crazy over a cliff. For that cardinal sin, House Republicans removed her from her leadership role last week and replaced her with Trump suck-up Elise Stefanik.

"We cannot let the former president drag us backward and make us complicit in his efforts to unravel our democracy," Cheney told her colleagues before they ousted her by voice vote, so as not to leave a paper trail for posterity. "Down that path lies our destruction and, potentially, the destruction of our country."

That ship sailed long ago, of course. But for anyone still clinging to the fantasy that the GOP is a stable, rational conservative party instead of a cultish, authoritarian farce, last week's events should have been a triple-espresso wake-up call.

Consider what the Republican Party tolerates — and what it doesn't.

Cheney spoke ill of Trump; she's out. Two years ago, Rep. Justin Amash sided with Democrats on some impeachment votes, then declared his independence over the GOP's blind allegiance to Trump; House Republicans forced him from the Oversight Committee. Georgia's lieutenant governor, Geoff Duncan, one of the highest-profile Republicans to push back against his state's crackdown on voting rights, isn't seeking reelection; he wouldn't have survived the primary. Nearly all of the Republicans who voted for Trump's impeachment following the Capitol riot were censured by their state parties; many will face primaries, too.

Meanwhile, the GOP hasn't demanded the resignation of Rep. Matt Gaetz, who might have paid high schoolers for sex, even as his corrupt and creepy bestie pleaded guilty to sex trafficking. It denounced Democrats for removing Rep. Marjorie Taylor Greene, R-QAnon, from her committees, despite her treasure trove of insane, idiotic, and dangerous conspiracy theories. It shrugged while Gaetz and Greene took their Trump-loving freak show on the road. It defended Georgia after the state passed draconian voting restrictions rooted in Trump's lies about election fraud. It applauded as Arizona's Republican Senate conducted a ridiculous "audit" of ballots in Maricopa County that everyone knows is designed to cast doubt on President Biden's victory there — and by extension, everywhere else — in November.

Its undevoted fealty to Donald Trump hasn't wavered even as he's spiraled further into derangement. On Saturday, he issued another absurd "election fraud" statement, this one claiming — based on, well, nothing — that "the entire database of Maricopa County has been DELETED! ... Additionally, seals have been broken on the boxes that hold the ballots, ballots are missing, and worse." (The county's top elections official, a Republican, responded: "Wow. This is unhinged. ... We can't indulge these insane lies any longer. As a party. As a state. As a country. This is as readily falsifiable as 2+2=5." Let's see how long it takes the rabble to come for him.)

If you want to see how long a shadow Trump casts, watch House Republicans find excuses to vote against a $1.9 billion bill to enhance the Capitol's security infrastructure in response to the Jan. 6 MAGA insurrection, and legislation to create a task force to investigate that day's events, which was crafted with top Republicans but will likely face massive resistance from the GOP anyway. Both bills present a tacit acknowledgment of Trump's role in stoking the fires that led to the deadly riot, and that's unacceptable.

As tempting as it is to look at the crazies eating their own and declare the Republican Party an endangered species, the internal bickering probably isn't costing the GOP its base. New political science research finds "little systematic evidence that Republican intraparty conflict over the issue of voter fraud impacts partisan political attitudes." In other words, diehard Republicans haven't lost faith in their party as their party fought over the nature of reality.

An important caveat: "little" isn't "none." Intraparty conflict might lead "weak" Republicans — those without a strong party attachment — to defect. And the more coverage the internecine fighting generates, the more it distracts from their election messaging — Biden! Socialism! Cancel culture! — while likely reinforcing the decisions of the suburbanites who abandoned them during the Trump era.

Which is why, at the same time the party cowers in the fetal position at the thought of offending Dear Leader and punishes anyone who dares criticize him, the GOP's highest-profile members are telling the world that no one is questioning the results of the election, don't be silly.

"I don't think anyone is questioning the legitimacy of the election," said House Minority Leader Kevin McCarthy.

"You guys in the press love doing this," Rep. Dan Crenshaw smirked at Chuck Todd when the Meet the Press host raised the issue.

To recap: It is a figment of the liberal media's imagination that anyone is questioning the legitimacy of the election — except for the former president, who does it constantly, whose claims must not be challenged, and whose lies have formed the basis for a litany of Republican-backed voting-rights restrictions. One Senate Democrat — as my grandmother used to say, three guesses, and the first two don't count — is blocking bills to preserve ballot access, making it significantly more likely that a minority party that has actively sabotaged democracy regains some control of Congress next year.

Liz Cheney is by no means a hero. But soon, we'll miss having the likes of her as an enemy.

Get more Informed Dissent delivered straight to your inbox. Subscribe at billman.substack.com.