You can’t always get what you want when it comes to Detroit’s hottest concerts, due to ticket scalpers

Bruce Alan Bennett, Shutterstock The Rolling Stones are one of the most anticipated upcoming concerts in Detroit.

Last week, tickets went on sale for big-name acts coming through Detroit — acts like the Rolling Stones, Rage Against the Machine, and Janet Jackson. But getting tickets to even stadium-sized shows these days isn't always easy.

Demand for Rage Against the Machine's July 13 concert at Little Caesars Arena was so high that the band announced a second show on July 15 shortly after sales started. While it's understandable that there would be a fan frenzy — it's the iconic band's first Detroit-area show since 1999 — many of the tickets are almost certain to have gone to scalpers and bots, or computer programs that gobble up tickets to be resold in the resale market at a markup. And tickets for the Rolling Stones June 10 show at Ford Field appeared on resale sites like Stubhub and VividSeats days before they even officially went on sale — an example of "speculative" ticketing, or scalpers selling something they don't even have.

These problems are not new, and they are unlikely to go away anytime soon, says Liza Joenler, a spokeswoman for the Truthful Ticketing Alliance. The group, a coalition of entertainment industry interests, formed in December.

"Our members were really just concerned about these practices that are taking advantage of fans, deceiving fans, and pushing fans onto the resale market, where they can charge exorbitant prices," Joenler says. "So the group wanted to hold those bad actors accountable, but also educate consumers on what to look for and how to buy their tickets safely."

As with many things, a large part of the problem here is money: according to TTA, the ticket resale industry is an $8 billion business in the U.S, so there's little incentive for resale sites to clean up their act. Sites like Stubhub and SeatGeek even send out marketing emails to encourage fans to buy speculative tickets.

As far as speculative tickets go, Joenler says to look closely at the seats: spec tickets will often list just a row number, but no seat number. It might also say something like "zone seating" or "comparable seating." 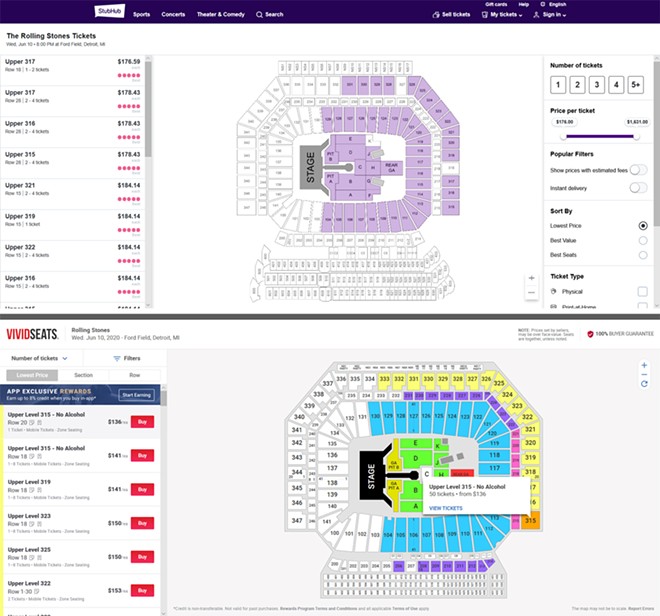 Another problem is that the modern-day ticket-scalping industry is far more sophisticated than the "sidewalk men" of the 20th century. In 2016, shortly before leaving office, President Barack Obama signed the Better Online Ticket Sales Act, or the BOTS Act, which made it illegal for scalpers to use computer software to mass-purchase tickets to sell on the resale market. It does not appear to have helped much.

"Even though they are illegal at the federal level, bots are still a major problem," Joenler says. "There are billions and billions of bot attacks on ticket sales every year."

There are other ways bad actors can trick fans, too, like "white label" websites that look like the official website for a venue, but aren't. Joenler recommends fans double-check the URL to make sure it's the venue's official site. "If you're unsure, call the venue to make sure you're on the right website," she says.

Many fans resort to other marketplace sites like Craigslist or Facebook to purchase resale tickets. Joenler advises that fans avoid doing this, as these sites have even less accountability than the official resale sites. Some unscrupulous scalpers will sell phony, Photoshopped ticket PDFs that won't work when they get scanned at the venue. And even when they sell legitimate tickets, they might sell copies of the same ticket to multiple fans, which means only the first fan to show up to the show will get in.

To avoid scams, TTA recommends trying to get in on artist pre-sales by signing up for emails or following them on social media. If you do resort to a resale site, they also recommend paying with a credit card, which allows you to dispute the transaction before the money leaves your bank account if the tickets are phony.

Some artists have tried to take matters into their own hands. In 2017, country star Eric Church's team combed through ticket orders for his tour and canceled 25,000 tickets they identified as being bought for resale, and released those tickets to fans. And in 2018, Nine Inch Nails made initial ticket sales available only in person from the venue box office, just like the old days.

"The promise of a world made better by computers and online connectivity has failed us in many ways, particularly when it comes to ticketing," the band wrote in a press release. "Everything about the process sucks and everyone loses except the reseller." Of course, this wasn't the most convenient way of delivering tickets, with Detroit-area fans reporting waiting in line for hours. "We've decided to try something different that will also likely suck, but in a different way," NIN admitted.

In the meantime, things ultimately won't change unless the ticket resale-industrial complex is forced to. "It's kind of up to these bad actors and about platforms deciding they want to do things differently, which, unfortunately, is not the most likely thing," Joenler says. "I think the more ... we can do to show consumers what to look for is the best thing we can do."

More information is available at truthfulticketing.com.