You don’t have to like what the rioters did. But you should hear them. 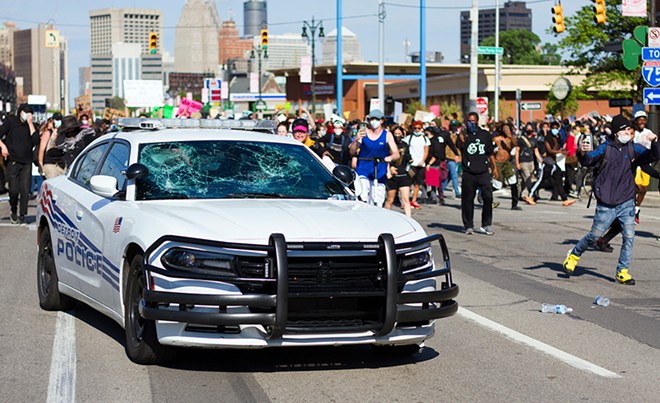 A Martin Luther King Jr. quote has made the rounds on social media this week, as civil unrest erupted from protests all over the country in the aftermath of George Floyd’s death-by-cop last Monday:

“A riot is the language of the unheard.”

But we do ourselves a disservice by reading this line, nodding wisely, and stopping there. It’s far more poignant and cutting in context.

King first used “the language of the unheard” in an interview with 60 Minutes in 1966, when he was addressing militant factions within the civil rights movement. “I contend that the cry of ‘Black power’ is, at bottom, a reaction to the reluctance of white power to make the kind of changes necessary to make justice a reality for the Negro. And I think we’ve got to see that a riot is the language of the unheard,” he told correspondent Mike Wallace. “And what is it that America has failed to hear? It has failed to hear that the economic plight of the Negro poor has worsened over the last few years.”

Read in that context, that line isn’t merely about the frustration of the marginalized. Rather, it’s a specific condemnation of white America — of ostensible allies who voice passive support so long as they don’t have to sacrifice their “tranquility” in the name of Black “justice, equality, and humanity.”

For years and for decades, we have failed to hear.

According to The Equality of Opportunity Project, a Black child born into the bottom fifth of household incomes has just a 2.5 percent chance of rising to the top fifth, while a white child born into the same circumstance has a 10.6 percent chance of climbing to the top. Black kids born into the top quintile, meanwhile, are almost as likely to fall to the bottom as they are to maintain their economic position. On average, white households are worth about 20 times more than Black households — and that statistic hasn’t changed in a half-century.

Meanwhile, African Americans are incarcerated at five times the rate of whites. And while surveys show that Blacks and whites use drugs at roughly the same rates, Blacks are about six times more likely to be imprisoned on drug charges. Nationally, Black people are nearly three times as likely as whites to be killed by police, and nearly twice as likely as Hispanics.

America has failed to hear.

The protests this weekend weren’t just about Derek Chauvin kneeling on George Floyd’s neck for nearly nine minutes while three of his fellow officers stood around and said nothing. Nor were they just about the reality that, without a video of that incident, there is zero chance Chauvin and his fellow cops would have been fired, let alone Chauvin being charged with third-degree murder.

No, the protests were also about Eric Garner and Tamir Rice and Philando Castile and Walter Scott and Trayvon Martin and Michael Brown and Freddy Gray and Sandra Bland and Botham Jean and Jordan Davis and countless others. They were about decades of criminal justice policies that targeted Black Americans and decades of economic policies that impoverished them. And they were about a political system that has for so long ignored them: on one side, a party that takes their votes for granted; on the other, a president who delights in racist, incendiary, and atavistic rhetoric.

Mix that with Depression-level unemployment, a pandemic that has killed more than 105,000 in four months, and militarized police forces eager to bust heads, and you had a powder keg waiting to explode.

It didn’t take much to set it off.

My point isn’t to excuse or condone rioting or vandalism. It’s to acknowledge that it didn’t happen in a vacuum.

There were, of course, opportunists who came to these protests not because they cared about the cause but simply to cause trouble. There were also, in some cases, white supremacists trying to make Black Lives Matter activists look bad.

And there were a lot of people who responded to overtly aggressive police tactics — cops who got to play dress-up in riot gear and seemed to think a few thousand people chanting “Black Lives Matter” was tantamount to a Soviet invasion. Videos from city after city show police, not protesters, instigating violence, blasting peaceful crowds with tear gas and less-lethal bullets and flash-bangs.

In Durham, North Carolina, where I live, the police took a different approach, blocking off traffic to make way for protests and making a point of de-escalating tensions. The city saw only one incident of vandalism. A few miles away, in Raleigh, the cops acted like they were going to war, attacked protesters — and bystanders — without provocation, and got two days of destructive riots for their trouble. (My newspaper’s Raleigh office was destroyed in the process.)

Shows of strength — when you equate strength to violence — are often counterproductive.

But the riots also arose from a sense of frustration, from years of resentment boiling over, from decades of the white power structure not hearing them.

That was what MLK warned about a half-century ago. If nonviolent protest (Colin Kaepernick taking a knee) or civil disobedience (protesters blocking highways) doesn’t get results, what comes next is inevitable.

It’s the language of the unheard.