You Don't Need a Dick to Propose 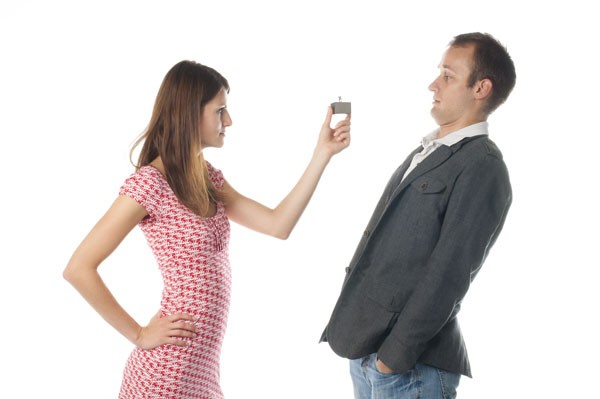 Q: I’ve talked to my girlfriends, my mom and his mom, but I need some unbiased advice. I’m a 28-year-old woman in a relationship for 3.5 years with a wonderful man, also 28. I hit the jackpot: He is loving, sweet, kind, driven, active, handsome, generous, etc. We’re very committed to each other and planning our future together. We’ve lived together for 2.5 years. Life is so great! Enter the issue: We’ve been discussing marriage since January of this year. Until May, he was opposed to it. Not in the can’t-see-spending-the-rest-of-my-life-with-you way, but in the not-wanting-to-marry-anyone-in-the-near-future way. “I don’t feel old enough yet,” he says, which makes me want to slap him, because my baby-making years are flying by. We talk about wanting the same things in life, like a family and a home, but those are things I won’t do with him unless we are married and also things I don’t want to start doing when I’m 35. We’ve talked about not wanting to be old parents and we seem to agree on everything — except he won’t pull the trigger. I just don’t get it! We did make some progress. In August, he mentioned the possibility of a proposal around the holidays, which are upon us. But when his mom asked if they should go shopping for a ring, he told her no! That blows a holiday engagement! I am ready for the next phase. He says he is too, but he won’t propose. I don’t get it! Some guidance would be great. —Put Off Proposal Depresses A Queenslander

A: This is going to seem random, POPDAQ, but indulge me for a second. There was an article in the New York Times recently about how young men still aren’t doing their fair share of the cooking and cleaning. “Women today make up 40 percent of America’s sole or primary breadwinners for families with children under 18,” Stephen Marche wrote. “[But] men’s time investment in housework has not significantly altered in nearly 30 years.”

Reading Marche’s piece — in which he makes the case not for men to do more housework (God forbid), but for men and women to live together in filth — made me say, “So glad I’m gay.” Out loud. On an airplane. I sometimes have that reaction when I read stories about “the gender wars,” which Marche is currently writing a book about, or when I read smut-shaming bullshit about straight men and porn. But Marche’s essay elicited a different sort of so-glad-I’m-gay response. It went something like this: “I’m so glad I’m gay because my husband and I don’t have the option of defaulting to the stupid gender norms, roles, expectations, neuroses and riptides that plague so many straight couples.”

So despite the fact that we’re both men, my husband and I do not live together in filth. When a bed needs to be made or a dish needs to be washed or a floor needs to be mopped — or a spouse’s cock needs to be sucked — one of us makes, washes, mops or sucks it. When there’s something that needs doing, we do it. We don’t sit around staring at an unmade bed or a dirty dish or a grimy floor or an unsucked spousal cock and think, “I have a dick — so bed-making, dish-doing, floor-mopping and cock-sucking aren’t my jobs.”

Do you see where I’m going with this, POPDAQ? There’s something at your place that needs doing — a proposal needs making — and you’re sitting around waiting for him to do it. Why? Because he has the dick.

“You must be the change you wish to see in the world.” Mahatma Gandhi said that*, POPDAQ, but I don’t need to tell you, right? Because that quote was at the bottom of your email. So here’s a thought: Be the change you want to see in your own fucking relationship. You want to get engaged to this guy? Propose to him.

Yes, yes: He has a penis, and traditionally the penis-havers** do the proposing in Breederville. But it’s not unheard of for someone to make a marriage proposal to a man. Just ask my husband.

A: If your boyfriend considers it cheating, then it’s cheating. But I nevertheless think you should see a pro dom for a no-sex domination session. (Most pro doms offer only no-sex sessions.) You might find the reality of being abused by a dominant woman less arousing than the fantasy, GMSLD, so a single session could snap you out of it, i.e., this out-of-sexual-character fever could break. And if it doesn’t? Then you need to have a talk with your boyfriend about your evolving sexual identity, your newly discovered kinks, and whether you can have him and your femdom fantasies (or realities) too. Good luck.

Q: I’m a straight 18-year-old girl, and I have been dating my boyfriend for eight months. He recently told me that he wishes we never had sex because he feels like he raped himself by doing it. He has had some bad sexual experiences in the past, but he has initiated almost all of our sexual activity. He says he has problems and a low sense of self-worth. I told him that we can take it slow, but I’m not sure he’s ever going to be OK with sexual things. He said that he doesn’t mind if I get sex from other people, but I want to help him understand that he’s a good person and that sex isn’t a bad thing. How do I do this? —My Sad Boyfriend

P.S. We’re both fairly sure that he could be asexual. Can asexual people enjoy sex at all?

A: Your boyfriend doesn’t need a girlfriend, MSB. What he needs is loving, concerned friends (you could be one) and a trained, competent therapist (you are not one). If having a girlfriend with sexual interests and needs traumatizes your boyfriend, then he shouldn’t have a girlfriend with sexual interests and needs. If he’s a miserable, game-playing jerk who likes to make other people miserable, MSB, and he’s discovered that playing the victim after sex (that he enjoyed) makes his girlfriend miserable, then you shouldn’t have him.

* Gandhi did not actually say that. He said: “If we could change ourselves, the tendencies in the world would also change.”

** Do not confuse penis-havers with penis-halvers. Something else not to do: a Google Images search on “genital bisection.”

This holiday season, send the Savage Lovecast as a gift! Find it at savagelovecast.com.