You Will Meet a Tall Dark Stranger

Woody refuses to burn out or fade away, opting instead to simply become irrelevant 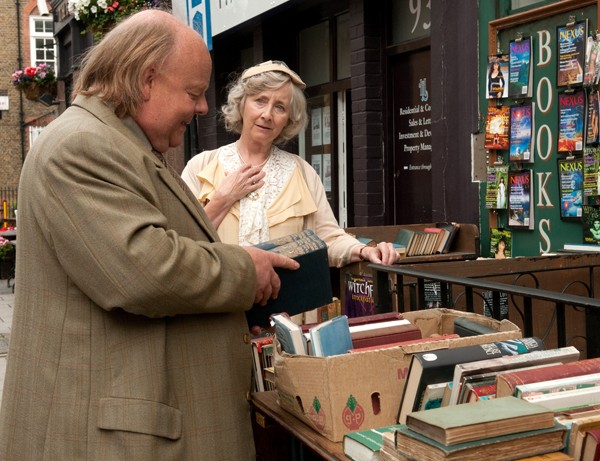 You Will Meet a Tall Dark Stranger

It's interesting to note how few of the iconic directors of the '70s have managed to stay vital and relevant in Hollywood today. Robert Altman is dead, Francis Ford Coppola has retreated to his vineyards, only occasionally emerging to make films no one will see, and Steven Spielberg (arguably more an icon of the '80s than the '70s) has become a box office brand, about as artistically ambitious as Microsoft or Coca-Cola. Only Martin Scorsese has managed to hold onto some of his cinematic mojo. In his quest to gain Oscar and box office respectability, he's gone a little vanilla in his old age (The Aviator, Shutter Island), but The Departed proved that he's still got it when it counts.

The first indication that Woody Allen's You Will Meet a Tall Dark Stranger is running on creative fumes is that it begins with a quote from Shakespeare — in what one hopes is a moment of self-deprecation. "A tale told by an idiot, full of sound and fury, signifying nothing," quips blander-than-bland narrator Zak Orth (an opera singer). And Woody's latest lives up to its introduction, as the 75-year-old filmmaker continues his yearly regimen of churning out overwritten and underrealized movies. Allen's overseas home has let him wear a Manhattan-shaped groove in Euro locales, but his films, even at their best, are tired retreads of his past work. Of the six he's made in the Old World, only Match Point and VickyCristinaBarcelona had any life in them. And truth be told, they weren't all that terrific.

If ever there were an example of an artist with nothing left to say, Woody Allen is its living definition. When you consider how many good films he made in the '70s and '80s, You Will Meet a Tall Dark Stranger makes it clear how far he's truly fallen. It's not that this latest is so bad. It isn't. It's just that it's so uninteresting and unnecessary.

A London-based roundelay, it focuses on two unhappily married couples (though marriage in general gets a swift kick to the groin). The first is Alfie (Anthony Hopkins), who has fallen for cheap, gold-digging call girl Charmaine (Lucy Punch) while his abandoned and distraught wife, Helena (Gemma Jones), has fallen in with a manipulative psychic (Pauline Collins), who keeps her plied with sherry and an endless stream of self-serving predictions.

Meanwhile, Helena's daughter Sally (Naomi Watts) is struggling with her own marital woes. An art-gallery assistant who's smitten with her sexy boss (Antonio Banderas) — also unhappily married — she's become disenchanted with her failed writer-husband Roy (Josh Brolin). Of course, it doesn't help that Roy has been chatting up the alluring young woman (Slumdog Millionaire's Freida Pinto) from across the way (who plays guitar in a scarlet slip). The expected complications ensue.

Allen moves his cast around like pieces in a chess game and, as usual, he gets terrific performances from each — with Gemma Jones miraculously turning an annoying cartoon into a convincing neurotic. The whole affair, despite its theme of death and mortality (the stranger in question), feels breezy and lighthearted but never lands any comic punches.

Lucy Punch brings what little energy the movie generates, but there's simply no way of getting around that she's been cast in one of Allen's thankless hooker roles, a comically condescending creation that makes clear his disdain for both the lower classes and female sexuality. Unlike Mighty Aphrodite, which actually had a goofy-if-patronizing sense of humor, the Alfie-Charmaine subplot is mostly played for predictably wince-inducing cruelty.

Allen can still be amusing and even, for a few brief instances, clever, but so much of Tall Dark Stranger is worthy of shrugs, a series of mostly predictable plot wranglings and neurotic hand-wringing. Most of the important plot points are revealed in narration, and whenever the complications seem ready to take flight Allen cuts away, unwilling to commit to his dramatic conceits. The most interesting thing about the film is that Allen has relegated true happiness solely to his more screwball characters, letting the romantic principals dangle in the wind, unfulfilled. Cynical fatalism is nothing new for Allen, he's always been a misanthrope at heart (with unhealthy dollops of misogyny on the side), but here there's a final sense of melancholy, an acknowledgment that the Reaper waits for us all.

And that hint at what You Will Meet a Tall Dark Stranger might've been is what roots Allen at the disappointing endpoint of his career. Instead of using his own mortality as fuel for a comedic examination of death's inevitably, he's frittering away time he has left on schmaltzy recycled satire like this. Could the wonderfully funny Love and Death, a film he made when he was 40, really have been his last word on the subject?