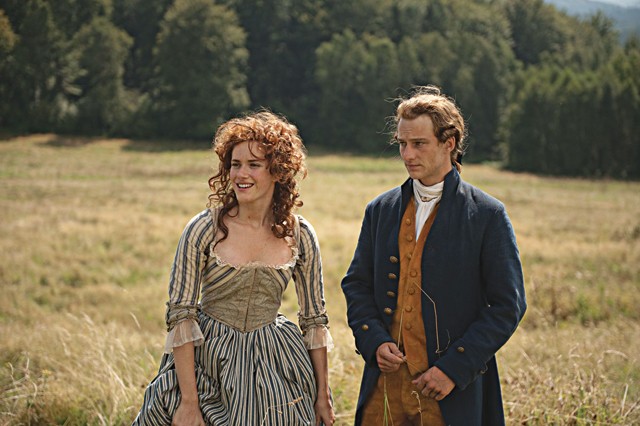 The words "German romantic comedy" are rarely used in the same sentence, and Johann Wolfgang von Goethe, a poetic titan whose potent writing once inspired a wave of teen suicides, is an unlikely subject for frothy fun. Yet, Young Goethe in Love (released as Goethe! in Germany for more oomph) is a bubbly amusement for most of its run time, only briefly descending into weepy melodrama in the third act.

Like so many biopics before it, Goethe relies on the hack screenwriting trick of very literally tracing themes and details in an artist's famous work to allegedly real-life incidents, though here the facts seem to be secondary to spinning a yarn.

We see a youthful, carefree Johann, fresh from flunking his graduate defense, less concerned about his future than with carousing on the streets of Frankfurt with his party crew whose fight song is "Sturm and Drank!" His prestigious dad is not amused and ships insolent sonny off to the country to work as a law clerk in a musty provincial court. Bewigged and wigged-out to be stuck in a dingy backwater town, Johann struggles until he catches the eye of flame-haired beauty Lotte Buff (Miriam Stein). She's the eldest daughter of a large brood, and helps raise her many siblings alongside her widowed father at their expansive, warmly lit country home. After playing an 18th century version of the cellphone callback game — one waits at the post office for the other to send a letter, then they literally pass each other on the road — the would-be lovers finally connect. They engage in a passionate, literally dirty romp in the fields, which, in accordance with international romance movie guidelines, takes place in pouring rain. The only thing keeping these two apart, aside from script contrivances, is that Lotte has been betrothed to Albert, a stuffier, wealthier man smartly played by Moritz Bleibtreu (seen in Munich, Run Lola Run and countless more titles). Worse — whoops — he's Johann's boss.

Will love conquer all? Maybe not, but it will inspire our hero to some great art as he pens his breakthrough semibiographical novel, 1774's The Sorrows of Young Werther. All this amorous mishegoss plays out against a gloriously lush backdrop of the pastoral fatherland, fog-shrouded mountain ranges, including stone-walled mansions and gilded cathedrals. That which didn't still exist is faked with seamless effects for what must have been a fairly modest budget.

Star Alexander Fehling is dashing, looking a bit like Heath Ledger in pupae state, and his exuberant boyishness is well matched by the rosy-cheeked sexiness of Stein. Their charms help us charge past the clichéd machinations that we've seen done better in such historical romps as Casanova, and Shakespeare in Love. This is shockingly frothy and slight stuff to be based on the author of Faust, but you don't have to bargain with the devil to enjoy it, you just have to bite your lip and revel in camp.