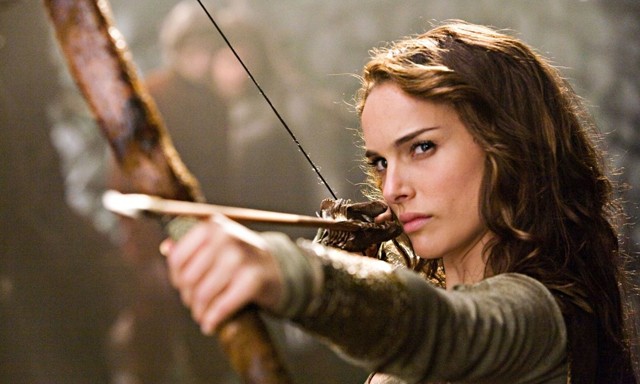 Where else will you see a fully engorged, hump-crazy Minotaur on a rampage? This prolonged assault on good taste is initially shocking, then dull, and then ultimately wears down your prudishness like that goofy kid making armpit fart noises on a school bus ride.

Written by and starring the potty-mouthed Danny McBride, Your Highness never met a problem it couldn't blast with an F-Bomb, and pushes the one-note gag of mixing pauncy medieval language with locker-room dirty talk about as far as humanly possible. Enjoyment hinges on your weakness for juvenilia, and willingness to allow your brain a night off.

McBride plays Thaddeus, the oafish, unworthy second son of a noble king, forever in the shadow of his brave and dashing older bro, the legendary Fabious (true renaissance man James Franco). These mismatched princes are thrust into action when the wretched wizard Leezar (Justin Theroux, in scene-stealing form) kidnaps Fabious, thus abandoning the prince's true love Belladonna (Zooey Deschanel) moments before the royal wedding. A series of fantasy movie clichés ensues, including angry dwarves, fierce monsters, naked wood nymphs, and in one of the highlights, a wise, benevolent old Yoda-like puppet sorcerer, who's also a weed-toking sexual deviant. You'll meet Thaddeus's clever squire (Rasmus Hardiker) who sports an Emo Phillips coif and a determined and capable lady warrior, spunkily played by Natalie Portman in her tireless campaign to star in a movie a month this calendar year.

Too much here rests on McBride's lumpy shoulders, and he hammers home his trademark brew of rude, sexist, unearned arrogance and incompetence in nearly every scene. Franco and Portman are far better; Portman gamely sports a thong, and Franco swings swords, though they're playing broad parodies. Meanwhile, Deschanel seems to be pretty much playing her usual snarky-cute hipster self in flowing princess dresses.�

Many jokes flop, and bad ideas linger for too long, but hold on, there'll likely be a guilty giggle. Gags are cheap, but some are infectiously funny, like when Theroux calls his plan to impregnate Deschanel in an evil dark magic ritual as "the fuckening."

It's still hard to believe that this insanity was directed by David Gordon Green, who once made delicate, soulful indie dramas like All the Real Girls, but now makes wobbly, highly violent comedies like Pineapple Express.

You don't need a working knowledge of old-school dungeon crawls like Conan the Destroyer or Krull, but it couldn't hurt, as McBride and Green are affectionately trying to spoof them, in the style of Ghostbusters.