Yukkin' it up with the zeitgeist 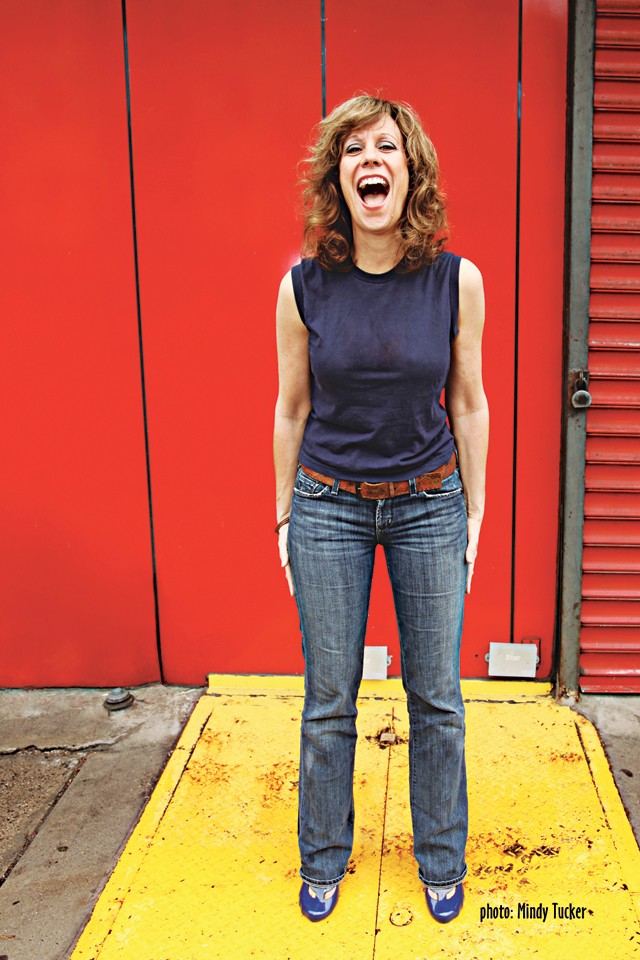 In 1996, comedian and satirist Lizz Winstead made an indelible mark on the media landscape when she co-created The Daily Show and became its head writer. From there, she went on to play a role in the founding of Air America, a progressive attempt to provide a counterweight to right-wing talk radio.

More recently, she wrote and produced an independent pilot of her off-Broadway hit, Wake Up World, described as a "scathing satire" of morning chat shows. With Winstead about to launch a six-city tour of shows to help support Planned Parenthood, we caught up with her by phone in her native Minnesota, where she was sitting on a porch, soaking up the sun and a Pabst Blue Ribbon. She told us how she plans to spend the summer driving across county in a Chevy Suburban, making stops along the way to raise awareness and generate laughs by satirizing politicians and making jokes about the media and, occasionally, her uterus.

Metro Times: Why a comedy tour to raise money for Planned Parenthood?

Lizz Winstead: In the course of the past year, the assault on women and women's health care has become so vast. The services that Planned Parenthood offers, providing affordable health care for women, services that are so important, services that I have used a bunch in the past, I finally said, "This is ridiculous. I can stand up. Why can't I just drive across the country and do shows that benefit Planned Parenthood?" All these lies that are being told have to be challenged. I can let women know what stake they have in this, and have a laugh along the way.

MT: How do you make the right wing's sustained attacks on a group like Planned Parenthood and reproductive rights funny?

LW: It's not necessarily that the whole show is about that. My act, and what I've been doing, is that I respond to the news of the day and the zeitgeist. And so, one of the things I talk about is the hypocrisy of taking on women's reproductive health care instead of creating jobs. Because I'm pretty sure my uterus has never created a job. In fact, it doesn't even do the job it's supposed to do anymore. So there are tons of things to point out in terms of their hypocrisy in making [Planned Parenthood funding] such a big issue.

MT: And what it's really all about, it seems, is that the right doesn't want women to be able to have a choice when it comes to the issue of abortion.

LW: That's the whole thing. The law of the land says that abortions are legal, and they can't get around that legislatively to ban it, and so they have to make up lies about Planned Parenthood, saying that your tax dollars are funding abortions. Because the truth is, not one penny of tax dollars goes to funding any of that, but somehow they've created the narrative that it does. It's like, let's make Planned Parenthood some evil monster instead of solving real problems. But it's not just Planned Parenthood. It goes much further. Instead of talking about anything that's real, it's like, let's put gays on the forefront of everything. Let's put the EPA on the forefront. Let's solve our problems by giving rich people more tax breaks and cutting Social Security and then also cutting programs for poor kids, so basically, poor people are carrying this weight of all this crap so that rich people can have more money. For a satirist, there's a lot of comedy to be mined in the world that we live in.

MT: The mainstream media sure seems to play right along.

LW: It's amazing where our focus goes and where the media takes us ... anything that's a carnival treat and cotton candy. The right also knows that the media will cover it rather than anything that's weighty and meaty, because it's too hard to understand how the mortgage crisis happened and how our financial crisis happened. To explain that is really hard. What's really easy to do is to show a picture of a representative's man-parts in his underwear and make that a story for a few weeks.

MT: So your response to that was to help create a fake news program, which, ironically, as the Pew Research Center for People and the Press points out, has become a primary source of news for many people.

LW: People often say to me, "Did you ever think that The Daily Show could grow to be this strong a force?" And how I would answer that is, "I never thought I would see the media be so derelict in their responsibility that a comedy show could have that much power." It's pretty incredible.

MT: Do you miss working on The Daily Show?

LW: You know what? I loved working on the show, and I would miss being there if I didn't know that Jon was at the helm because what Jon has done is follow the natural trajectory of what the show has been about. I mean, follow the trajectory of how the media has developed. Every night I'd watch the show I'd think, "Oh, my God, I'm so happy you're covering this." It never disappoints.

But it's a grueling schedule. When you're on that show, that is your life. And so, for me it was like, how can I kind of have some kind of life, and still respond to the world in my own way? It's good to have more people and more entertainment and media out there doing it than just having all the good voices on just one show or two shows. So I'm thrilled to be a spectator of it now, and I feel really happy that the bones I built and the skeleton and this framework and the tone has lived on and grown to such an amazing place. And I don't take any credit for that because Jon grew it there. So I feel like I can beam about it like a proud parent.

MT: Besides, it seems that there's more than enough material for everyone to work with, even if we don't still have George Bush in office.

LW: It doesn't matter if it's Democrat or Republican. If you've been given the gift of power and you use it stupidly or you use it for evil, that's how I choose my targets. It's pretty much that simple. Comedians, if they are of a political persuasion as I am — I'm an unabashed progressive, I call myself that — you're constantly going, "Oh, if the world starts getting better then I am kind of screwed! I might be out of a job." But there doesn't seem to be any chance of that happening anytime soon.

Lizz Winstead will be opening her upcoming tour in Pontiac at 8 p.m. on Saturday, July 9, at the Historic Eagle Theater, 1 S. Saginaw. St; $30; for more info see miplannedparenthood.org.