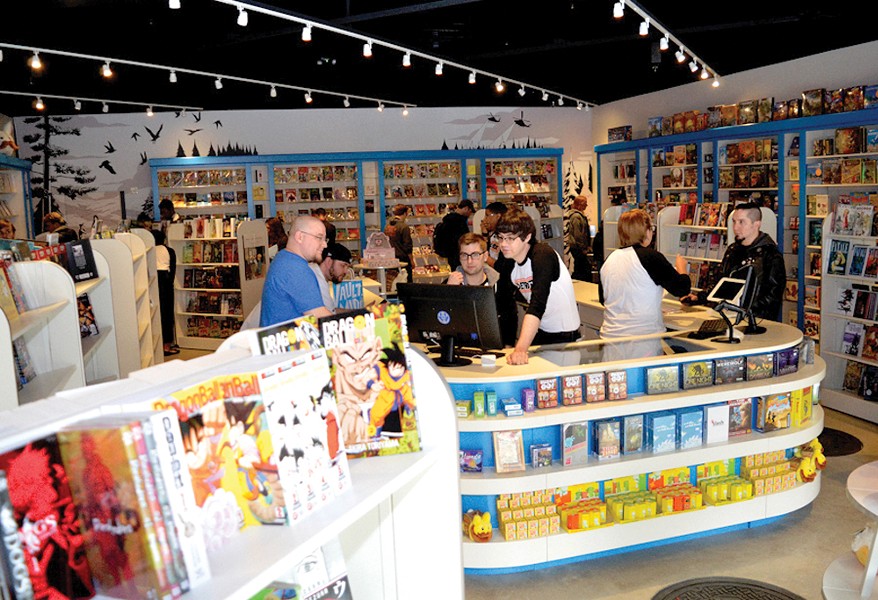 Vault of Midnight's Detroit location is open, and comic book nerds and civilians alike are flocking to the brightly colored, well-stocked store to enjoy more than just graphic novels and action figures. The store has sister locations in Ann Arbor and Grand Rapids, and all three are known for inclusivity and bucking the notion that such businesses should be run my snobby fanboys and girls.

The shop, a far cry from the typical musty and aesthetically unpleasant comic warehouse, is beautifully designed and laid out with a circular front desk at the center of it all. Cream colored shelves with curved edges fill the shop, and even the walls are stacked with comics, toys, games, t-shirts, and other comic-related merchandise.

Vault of Midnight is located in Dan Gilbert's Z-Belt, alongside neighbors like Punch Bowl Social, Library Street Collective, Nojo Kicks, 7 Greens, Standby, and Citizen Yoga. Not far away, in the heart of downtown Detroit, shoppers will find John Varvatos and Moosejaw. By the end of the month, the Nike store will be open, too. The burgeoning shopping district has something for everyone, much like the comic store itself, which will entice even the least nerdy shopper to enter.

You'll find fun gifts like Pusheen (the fat cat you may recognize from Facebook) plushies, Godzilla figurines, the Sushi Go! Card game, and Cards Against Humanity.

The staff is friendly and helpful, although they're usually pretty busy handling the many customers that crowd the store. They'll help you find what you're looking for, and if it's not stocked in the store, they'll do their best to track it down and order it for you.

As for comics, the 2,000-square-foot store has all the requisites. They've got American classics like Batman and X-Men. They carry Doctor Who. They stock plenty of Japanese comics like Dragon Ball Z and Saga, plus other manga.

The shop's exterior facade mirrors that of the original Ann Arbor location, with a modernized feel. The glass window façade and the interior custom shelving and fixtures were made by Michigan firms Cantelon Finishers and By The River Carpentry, according to a press release.

Curtis Sullivan, Nick Yribar, and Steve Fodale co-own Vault of Midnight, and they've said they're "thrilled to bring something new and completely different to the mix and become part of the city's historic resurgence."

We're pretty thrilled they're here, too.