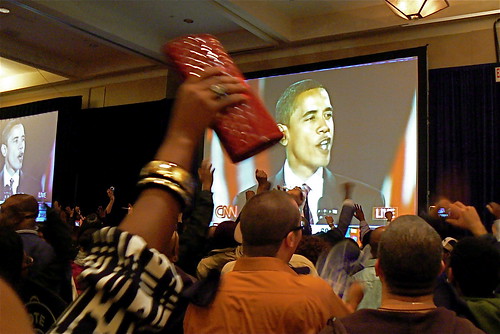 In Phoenix, Sen. John McCain had finished his concession speech. In the streets of downtown Detroit, the first notes of the celebratory car-horn symphony were being honked and tooted. Up several floors in the ballroom rented by the Democratic Party, lots of folks, including pretty much all the bigwigs, were trickling out. Gov. Granholm and re-elected Sen. Carl Levin had given their speeches and split. Detroit City Councilwoman Martha Reeves and her entourage were exiting as we made our way in.

But that left a throng of hundreds and hundreds — could there have been a thousand? — in the ballroom, their jubilation a sort of collective roar in celebration of President-elect Barack Obama. The CNN pundits on the four large projection screens at the front of the room were drowned out, but what mattered more were the periodically updated vote tallies, the blue-washed electoral map, with its few red splotches and the undecided yellows clicking off. A proper lady, who we presume doesn't often seek to discuss ass-whooping, told us, "You saw the numbers" — and there was no doubt which numbers she meant. "He beat him up. It wasn't no squeaker."

Among those milling around, clearly feeling like a million bucks, we noted artists and political consultants, unionists and school teachers, musicians and advertising execs, real estate agents and activists, long hairs and graybeards, with more African-Americans than any other group, but encompassing the breadth of the Rainbow Coalition proclaimed by Jesse Jackson, the last serious African-American aspirant to the presidency. We even met Germans and Brits who came here to work for Obama in the campaign's final days, "on their own dime," because the issues here were "bigger than America."

Sam Cooke crooned "A Change Is Gonna Come" over the loudspeaker at one point — would it ever sound more prophetic? Then came "One Nation Under a Groove," which snapped a phalanx of "Hustle" dancers into formation. "One nation under a groove and you can't stop us now," sung by George Clinton and Co., was merged with rhythmic chants from the floor of "O-bama — O-bama — O-bama — O-bama."

Then the man himself strode toward the podium in Chicago, and the Detroit crowd surged toward his image on the multiple screens. The Detroit hundreds cheered along with their 100,000 Windy City counterparts. When the camera zoomed in on the Chicago crowd, the Detroiters might as well have been cheering their Rainbow reflection. (And, notably in the crowd shots, was the original Rainbow visionary, the Rev. Jesse Jackson, his eyes, wet and welling before it was all over.)

"If there is anyone out there who still doubts that America is a place where all things are possible; who still wonders if the dream of our founders is alive in our time; who still questions the power of our democracy, tonight is your answer," Obama started out, to the first of many roars of approval. (We started off counting, but soon lost track.)

His riff of "It's been a long time coming change has come to America," with its Sam Cooke echo, was one of the many others, likewise his shout-outs to the foot soldiers of the campaign, and the folks with their $5, $10 and $20 donations, and on to his stirring evocations of American hardships overcome and difficulties ahead.

After the speech was over, after the Obamas and the Bidens had finished their victory waves, they strode from the Chicago stage, and the roar of approval in the ballroom fractured into so many smaller conversations, seemingly all about variations on the same few themes.

"We have overcome," we heard one woman exult, only to be corrected by a companion: We've overcome a lot of hurdles, many more remain. We heard a man talk about going home and playing that Sam Cooke tune again.

And one comment about Obama that stuck with us as we headed into the night was the older woman who simply said: "Now we have to pray for him."