August 20, 2014 at 5:00 PM
comment
Fernando Palazuelo, the Peruvian developer who recently bought the long-abandoned Packard Plant, wants Detroit's 555 Gallery to return the Banksy painting that they removed from the site in 2010, Motor City Muckraker reports.

Palazuelo plans to develop the site into commercial and residential space. Returning the artwork to the site would certainly add value to his development, as well as hipster-cred — recent paintings by the world-famous street artist have sold for more than $500k. Pazuelo purchased the entire 3.5 million-square foot site for a little over $400k.

In the world of street art, though, removing a piece from its original context is viewed as a faux pas — but what about returning the painting to its now-altered context? Banksy himself would most likely not approve of the transfer.

When a 'Stealing Banksy' exhibition of the artists' salvaged works opened in London earlier this year, the mysterious artist posted a message on his website: "This show has got nothing to do with me and I think it's disgusting people are allowed to go around displaying art on walls without permission."

The 555 Gallery caught flack for announcing last year that they were seeking to sell the work of art, after initially saying they removed it in order to preserve the piece. Palazuelo is reportedly seeking the group give him the Banksy painting as a donation.

Read up on MT's cover story about the whole ordeal from earlier this year here. 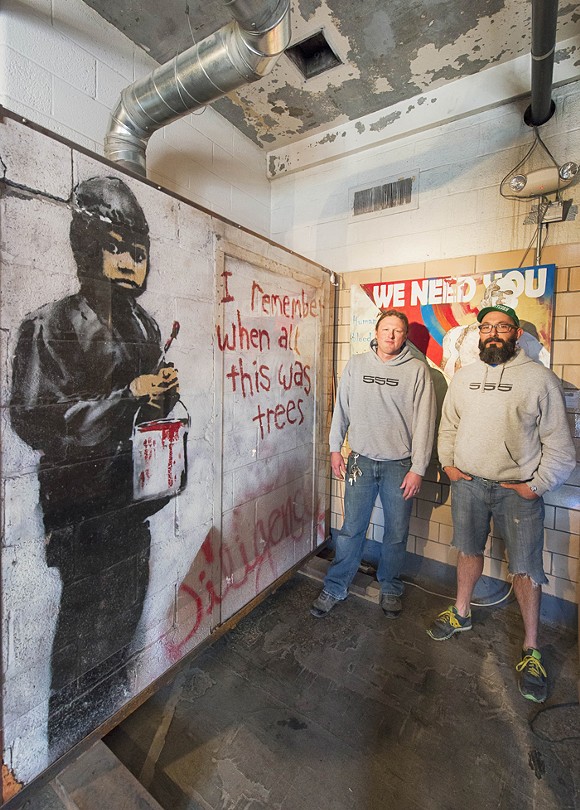