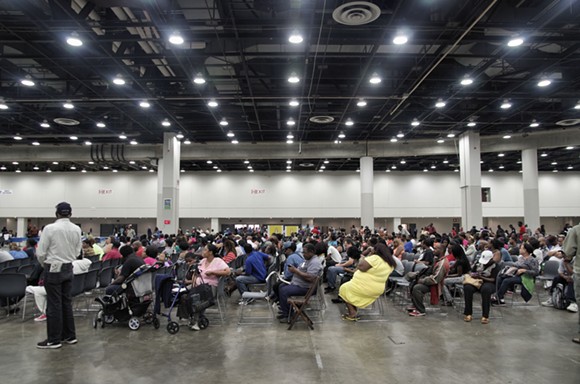 ‘CARE’ BUILDING DEMOLISHED
Any memories of the so-called “Care” building in downtown Detroit will have to live on through a Kid Rock music video and countless photos of the past that captured the structure. Last week, the 5,800-square-foot building was demolished by court order.

Anthony Pieroni, part-owner of real estate firm Triple-A Venture and the company’s decision maker, sent a pair of backhoes to demolish the structure last week after his request to Michigan’s Court of Appeals to stay a Wayne County Circuit Court judge’s order was denied. Pieroni had until Aug. 15 to remove the structure, under an order from Judge Robert Colombo. Within a day, most of the building was demolished, leaving an entire street block vacant downtown.

The decision to bring down the only structure still standing adjoining the footprint of the former Statler Hotel site stems from a heated lawsuit between Triple-A and the city of Detroit. In a lengthy ruling from the bench, Colombo blasted Pieroni’s character, saying, despite his proclaimed intentions, the 74-year-old would never redevelop the building. An evidently irritated Colombo said the structure had deteriorated to the point “a high wind can easily knock the east wall down … and injure or kill members of the public.”

Triple-A immediately filed an appeal with Michigan’s appellate court, and requested a stay of Colombo’s order, but was denied the request on Aug. 15. Pieroni’s attorney, Hugh “Buck” Davis, tells News Hits his client still plans to follow through with the appeal, but doesn’t expect a decision to be handed down until next summer.

The vacant building hasn’t been active since the Statler Hotel was demolished in 2005, which Pieroni contends subsequently damaged his structure at 139 Bagley St. In the lawsuit, Detroit said that’s irrelevant, that Pieroni received nearly $1.8 million to fix the place up, rather than let it sit fallow. Colombo agreed. The move makes way for a developer with plans to redevelop the whole block, including the adjoining Statler site, a $40 million project the Detroit Downtown Development Authority approved this year — even though the proposal included Pieroni’s parcel, the only piece on the street block not owned by the city.

Pieroni, however, doesn’t appear willing to concede the fight. In a counter-complaint, Pieroni accused Detroit officials — including Mayor Mike Duggan and Detroit Economic Growth Corporation vice president Brian Holdwick — of engaging in civil conspiracy to coerce him into selling the property for a lower price to the developer with plans for the Statler site. Though that claim was voluntarily withdrawn from circuit court to allow Triple-A to file the appeal to Colombo’s ruling, attorney Davis tells News Hits that, once a decision on the appeal has been made, Pieroni plans to file the complaint in federal court.

About 1,140 residents entered into payment plans, according to DWSD, bringing the total to roughly 25,000. It's unclear how many customers would face shut-offs this week; the moratorium enacted earlier this month ended on Monday.

Detroit’s water department has shut off service to residents with either a $150 outstanding balance or a 60-day past due bill. Roughly 17,000 residents have had their service cut this year, more than two-thirds of the entire 2013 totals.

And tell us what DWSD’s response has been after you’ve contacted them. You can drop us a line at the email listed below.

SUBURBANITES PUSH BACK ON BIG OIL
Perhaps a little activism can pay off: In light of a public outcry in Shelby Township, a Traverse City-based company announced it would halt plans “indefinitely” to drill an exploration well in the community. The company’s vice president says it will work to “address concerns” raised by the public before moving forward with its drilling operation.

And whether it’s a N.I.M.B.Y. attitude or a genuine fear of slick oil seeping into their front lawns, some anti-drilling suburbanites are worried sick right now. Case in point: Last week, nearly 700 people packed a town hall meeting in Shelby Township to raise hell over Traverse City-based West Bay Exploration’s plans to drill for gold — sorry, oil. (You’d be hard-pressed to find any town hall filled with even a dozen people for a typical town hall meeting.)

West Bay planned to drop a test well in a location as close as 500 feet to some Shelby Township homes, according to The Detroit News. The overwhelming show of flesh prompted the township’s board of trustees to approve a resolution that would halt any drilling for six months, but West Bay’s chief told the News there’s likely no teeth behind the move.

“I’m not sure their moratorium is anything more than symbolic,” West Bay chief Patrick Gibson told the News, as the state regulates drilling operations, not a municipality. So, if West Bay meets the state’s threshold to drill by obtaining the mineral rights leases from private landowners, they can move forward. That’s partly why Rochester Hills residents took their city to court earlier this year after West Bay and its partner in a joint venture, Jordan Development Company, came to town, as Metro Times previously reported