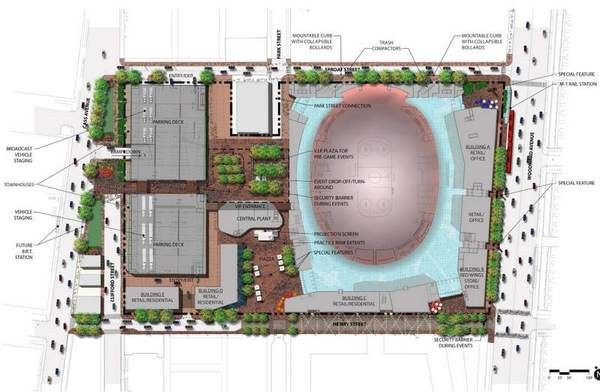 Out of the numerous public meetings held to consider the new Detroit Red Wings arena near downtown, some of the most interesting remarks have come from Raquel Castañeda-López, Detroit City Councilwoman who represents District 6, where the majority of the new arena and adjacent entertainment district will be located.

During a public hearing held by Detroit’s City Planning Commission last week, Castañeda-López continued that trend, highlighting a couple of points that, to the knowledge of News Hits, haven’t been considered in the negotiations over the new arena.

Take, for instance, the fact Cass Avenue is slated to become a main biking corridor in the city. With an expected 200 events per year at the new arena, that doesn’t exactly mesh well with the new $450 million arena. Motorists prior to hockey games, concerts, and more will pour into the arena district, and many will park at a new structure expected to be built along Cass between Henry and Sproat.

You might recall, late last year, the Michigan Department of Transportation (MDOT) awarded a $1 million grant toward, as Curbed Detroit put it, “enhancing Cass Avenue as a bike-friendly alternative to Woodward Avenue, which will eventually be home to the side-running M1 streetcar line.” The decision to construct a (mostly) curbside-running streetcar along Woodward has drawn criticism from cycling proponents ever since the concept was announced.

Not to be hardened naysayers of the designs for the new arena and M-1 Rail project, but, some might remember, MDOT took aim at those criticisms in its environmental assessment completed for the M-1 Rail, writing that “most of the streetcar/share-use lane would be a smooth surface, a groove would be necessary in the pavement adjacent to each rail to accommodate the wheel flanges on streetcar vehicles. This could adversely affect bicyclists, as there is a potential for a bicycle wheel to get caught in the groove.”

So, MDOT went on to propose a number of alternative parallel routes to Woodward for cyclists, “including Cass Avenue ... [which] may be a better alternative route than John R Street for bicyclists since it has a direct connection to Downtown.”

For 200 days out of the year, there will be a steady stream of traffic that will flow off of I-75 and onto Cass, where the arena’s parking structure will be located. That’s not the friendliest environment for a cyclist heading from the Wayne State area to downtown, or vice versa, during the afternoon and evenings.

The Red Wings' owner, Ilitch Holdings Inc., also say the company intends to construct close to 170 housing units that will, as one of the project’s developers put it, “allow you to literally live at the arena so to speak.”

A simple question came to our minds: Where will all the new residents park? The developer, Richard Heapes, says it’s likely they would park atop the new parking structure along Cass. We can only imagine potential residents hoping to park at those new apartments will have an interesting time parking during an event night — or leaving or coming home before or after one.

And speaking of that parking structure, Castañeda-López offered an excellent alternative: Why not put the thing underground? As she put it, underground parking would have opened up an even larger amount of space, and would’ve promoted walkability.

If only Castañeda-López had a seat at the table when negotiations for the project began. Maybe then these kind of common-sense suggestions would’ve been taken into consideration.