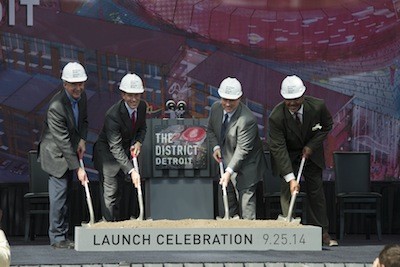 Yesterday's dog-and-pony show for the new hockey arena sure was exciting. We had an observer present who described something out of the old Soviet Union, much unlike the wide-open Old West feel of the properties the Ilitch organization has let fall apart or lie fallow. Instead of open, weed-strewn lots, there were police checkpoints and barriers, making sure the "invite-only" crowd wasn't infiltrated by anybody not previously approved. There were almost no surprises, save Chris Ilitch doing a bit of September stumping for Gov. Snyder. Why shouldn't he? Hasn't Snyder helped the Ilitch organization seal the deal on hundreds of millions of dollars in taxpayer money, even as the city fell into bankruptcy?

Looking over the glowing media coverage this morning, it's hard to believe that nobody in Detroit's media has seemed to pick up on that last bit. One of the poorest big cities in the United States, just beginning to emerge from bankruptcy, has essentially given acres and acres of land downtown and sacrificed tens of millions of dollars to help enrich a billionaire under a deal that will leave Ilitch with what is essentially a tax-free enterprise. Those are blunt terms, to be sure, peeling away all the happy-talk about (temporary) jobs and (publicly subsidized) development and (tax-free) economic activity, but essentially correct. If this sort of deal were to go down in, say, Cuba, it would be rightly decried as the greedy opportunism of high-placed party members suckering a public brainwashed by their Communist overlords. But when it happens in Detroit, our local media simply can't help cheering madly. Looking over today's coverage, we have yet to find a story from the local papers that offers even one fundamental quibble about this giveaway to our new lords of feudalistic capitalism.

Well, except for mLive, that is. That media outlet's David Muller at least acknowledged the troubling questions underlying the deal.

Some have argued that using public money to help pay for the project amounts to corporate welfare.
Both Ilitch and Snyder disagreed with this sentiment when asked about it by the media after the event. Ilitch said large developments have been done this way throughout the U.S. for the last two decades.
“Quite frankly, from the private sector, we couldn’t do this on our own, it is not economically feasible. And from the public sector, the public could not do this on their own,” Ilitch said. “And so this is a tremendous example of the private sector, the public sector coming together and unleashing tremendous power in a project like this that will create 8,300 jobs and tremendous economic impact that will be felt through our state of Michigan.”
Snyder called critics of the project "off-base," adding that "these are public-private partnerships, they're how they happen." ...
"If anything, we shouldn't be criticizing anyone," Snyder said. "We should be thanking the Ilitch family."

This weaselly defense of the sweetheart deal was, oddly, not covered in other press coverage we saw, even though it seems these questions were asked after the ceremony. (Self-censorship, thy name is Detroit's press corps.) They are easily debunked. Just because there are precedents for corporate welfare doesn't mean that this deal is anything less than corporate welfare. As for the Ilitches not being able to do this deal alone, that strains the imagination: The Ilitch fortune is estimated to be $4.1 billion. As for the touted "economic impact," even the project's biggest cheerleaders acknowledge those details are still fuzzy; it's a certainty, however, that most of the "economic impact" will be landing in Ilitch coffers thanks to the sweet tax deal, another seldom-discussed point for Detroit's big media.

And, finally, really? We shouldn't be criticizing anyone? As Michiganders, we're going to give hundreds of millions of our hard-earned tax dollars to a billionaire, and we should be thanking him? And the people covering this give the journalistic equivalent of a standing ovation?

Wayne State University's Jerry Herron once described Detroit with the closing lines of Roman Polanski's Chinatown. Faced with a city where the game is rigged and the rich and powerful always win no matter how big the crime is, private investigator Jake Gittes is told, "Forget it, Jake. It's Chinatown."

How apt a description that is.