Looking back at Detroitblogger John's 2009 take on Tom Boy Market 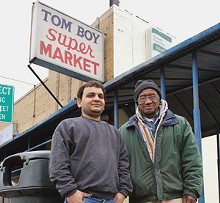 Upon hearing news that Tom Boy Market on Cass Avenue has been sold to make way for a "high-end retail shop," Curbed Detroit highlighted a 2009 column in this newspaper on the shop from John Carlisle, who wrote under the name Detroitblogger John. Carlisle, who now slings ink for the Detroit Free Press, wrote about the neighborhood surrounding Tom Boy, "home to the down-and-out and those who feed their habits. They all wound up here in the city's longtime Skid Row with others who are just ilke them. And many make their living in the Tom Boy paring lot.

Carlisle's piece takes you back only five years; when you consider that fact alone, it's rather remarkable to have witness how much change has taken place in the neighborhood Tom Boy is situated. As Sarah Cox points out on Curbed, Midtown now boasts Shinola watches, high-end clothing in Willy's, and more. New restaurants and businesses continue to open regularly in the area nearby. And just five years ago, this is the scene Carlisle soaked in:

Fifty-seven-year-old Panama Little lives in a nearby loft. He says the main difference between the pre- and post-Jitu scene here is how few prostitutes work this post now. "They'd actually stand on the corner half-naked," he says. "You could see the actual pubic hairs. Honestly."

Outside, the mob disperses quickly at the sight of Jitu standing in their midst. A prostitute wearing too much makeup leaps from her perch, walks over to an idling car, hops inside the passenger door in a hurry, gets kicked out by the driver, then finds herself standing there foolishly. "Can't I get a ride up in here?" she complains to nobody in particular. She paces aimlessly at a distance. Drug dealers hover along a self-imposed perimeter away from the store, staring as their post is momentarily disrupted.

An amused David Leak, 56, watches the spectacle. He's haggard, has few teeth and lives in a battered apartment a few blocks away. He professes love for the Patels. "I really hated them the first year, though, because they didn't have no beer," he says. (There was a liquor license transfer issue and the store was dry for a while.) "That was rough for me!" he yells.

Leak explains Tom Boy's allure to loiterers. "One thing, the canopy," he says. "Then you got that box to sit on," he gestures towards a newspaper box, "then you got these bars to sit on," he points to the metal grid that keeps customers from stealing shopping carts. "And then in a psychological sense it's preparing them for jail 'cause they already behind the bars," he says with a dry laugh.

For nearby low-income residents who shopped the grocery store, the loss of Tom Boy means they'll likely have to trek down to University Foods at the Lodge & Warren Ave.

Speaking with Steve Neavling at Motor City Muckraker, one resident said upon seeing a "closed" sign on the shop's door: "You got to be kidding me. What now? Where am I supposed to get food?" The resident told Neavling she couldn't afford to shop at the next closest grocery store: Whole Foods.