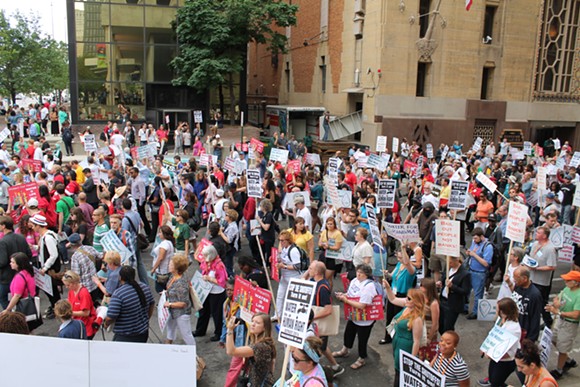 After calling the city's water shut-off program an affront to human rights, officials from the United Nations will visit Detroit this evening to hear from impacted residents.

A bevy of local groups have organized the meeting with the United Nations Human Rights Office of the High Commissioner for Human Rights, including the Detroit People's Water Board, National Nurses United, and the Michigan Welfare Human Rights Organization.

The meeting will center on the "need for adequate housing, the basic human need for water, and what happens when people are denied access to water," a press release advancing the hearing says. The testimony comes weeks after a U.S bankruptcy judge shot down a request for a temporary injunction on shut-offs to facilitate the possible implementation of a water affordability program.

The meeting and testimony will take place from 4 to 6 p.m. at the Wayne County Community College District Downtown Campus inside the atrium at 1001 W. Fort St., Detroit. Doors open at 3:30 p.m.