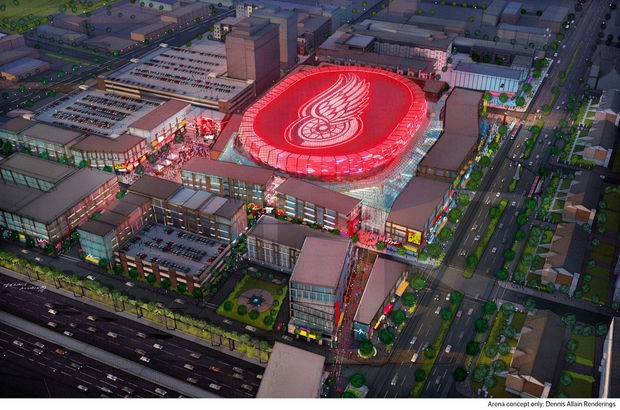 The owner of the Detroit Red Wings will host a career expo this week to explain job opportunities for Detroit residents at the team's new arena, which broke ground last month.

The company has said 51 percent of the expected 5,500 construction jobs needed to build the new $450 million arena will go to Detroit residents. This was agreed upon during intense negotiations over whether Olympia should agree to a legally-binding Community Benefits Agreement. It declined, and conceded to abide by Detroit mayoral executive orders, which say at least 51 percent of Detroiters should be hired for such projects.

If you can't attend the expo, the company says you can register online and complete a skills assessment for consideration. Additional events will take place in Detroit neighborhoods throughout November and December, Olympia says, with a full schedule to be posted in the coming weeks at districtdetroit.com/jobs. As jobs become available next year, the company says it will notify residents which opportunities they qualify for.

Anyone who plans on attending is asked, if they have one, to bring their most recent resume, or list of their most recent work history and experience. The expo will provide opportunities for individuals to meet with trade associations, as well as information about financial aid programs, GED preparation, resume writing, and job interview tips.

The new Red Wings arena will be constructed on a 13-acre plot of land bounded by Woodward Avenue to the east, Henry Street to the south, Sproat Street to the north, and Clifford Street to the west.

Construction costs of the arena will be covered by $285 million in public tax dollars (53 percent of the total), and $250 million from ODM (47 percent of the total). The Detroit DDA, which will own the arena, will sell $450 million in bonds to the Michigan Strategic Fund to support construction costs. In turn, the MSF will sell those bonds to investors. The MSF bonds will be paid off by three revenue streams: $15 million or more in state school taxes the DDA can legally capture, $2 million in a separate DDA tax capture, and ODM's annual $11.5 million fee.

Significantly, a $15 million cap on the use of state school taxes the DDA can legally spend toward retiring the bonds has been lifted at the request of Bank of America, one of the two financial institutions expected to purchase bonds for the project. The new plan also indicated the DDA anticipates it will enter into an interest rate swap on $200 million in bonds that will be secured by revenue from ODM.

Also: the DDA anticipates it will enter into an interest rate swap on the $200 million in bonds issue secured by $11.5 million in money contributed annually by ODM.

The swap deal adds a potentially dangerous risk to the DDA. The swap, essentially a financial gamble, would allow the DDA to synthetically fix the interest rate, and assumes a benchmark interest rate used by financial institutions across the world will rise, rather than fall. The swap would last until the bonds are retired life in 2045.

In return for the fixed rate the DDA will pay a yet-to-be-named counter-party (that will be later identified by ODM), the DDA will receive a variable interest rate payment from the counterparty based on LIBOR, the London Interbank Offered Rate, an interest-rate benchmark. Last month, the DDA sought a swaps adviser on the deal, and, according to documents, selected New York City-based firm Mohanty Garglulo.