At this point, Schauer hasn't conceded. But it looks like that's how things are going to shake out. if anything changes by morning, blame everyone else for messing things up. We're calling it a night here, all. For a recap:

One of his best boys was former Senate Majority Leader Mike Bishop. Four years ago, Bishop promised to allow the Senate to hold a vote on whether to form a public-private partnership with Canada. But Matty didn't like that.

Suddenly, Moroun poured more than $150,000 in contributions to political candidates and committees under Bishop's control. Guess what. Mikey went back on his word!

I still have no idea why some 22,000 of you would want to follow an old Polish lawyer from Detroit, but this is nice! http://t.co/6QjdG2PIQe

Lon Johnson, the Michigan Democratic Party chairman, reportedly says its way too early in the night, as nothing from Wayne County has been reported yet.


.@LonBJohnson says only 18% of vote in Michigan has been counted, none from Wayne County, says way too early to call governor's race


Here's how the Freep's story kicks off:

Michigan Gov. Rick Snyder coasted to victory Tuesday in an election to decide whether the Republican had earned a second and final term or Democratic challenger Mark Schauer gets a chance to undo much of what Snyder did in the last four years.

Then, you see, with more results coming in, people now have questions — such as, why is Snyder up by 14 points, and why has he been declared the winner before 10 p.m.?

If Snyder maintains this kind of lead, this can perhaps be part of the answer. From Nate Silver's 538:

That would be fine if Mitchell released the full data from the first poll. But it didn’t.

A pollster should release its work regardless of whether it thinks the results are right. Outliers happen even to the best pollsters. They are supposed to happen. And, of course, a pollster has no way of knowing whether a result is an outlier. Sometimes when a poll appears to be an outlier, it’s the first survey to pick up real movement in a race. And sometimes when a poll fits neatly into previous surveys, all the surveys end up being wrong.

“One of the challenges we had in this particular race is there was millions and millions in outside special interest money coming in against me, and we simply didn’t have all of the resources to counteract that,” Snyder told reporters early Tuesday evening. “I mean, literally it was a million dollars a week for a month there, again largely lies with respect to education cuts and other things. We responded the best we could.”

Here's the Freep from last year, talking about a bill Snyder signed that doubled campaign limits and protected the secrecy of issue ad donors:

[Michigan Secretary of State] Ruth Johnson, who like Snyder is a Republican, announced Nov. 14 she would seek rule changes to require public disclosure of issue ad donors. Almost immediately that same morning, a Republican-controlled Senate committee amended SB 661 to include wording that would prohibit such a change. The full Legislature later approved the amended bill.

Barring any ridiculous change of events, that won't happen. The piece highlights some of Lynn Land's attempts to break through, to no avail, and recalls a pivotal moment back on Mackinac Island in May.

Instead, Land’s most memorable moment on the campaign trail was in May, when she burst out in a scrum of reporters, “I can’t do this. I talk with my hands,” as they asked her questions. Since then, story after story has portrayed Land as hiding from the media, with national reporters traveling to Michigan to find unannounced campaign events.

"Michigan is a bellwether state and the fact is no where have we seen the importance of politics more than in Michigan because six years ago the auto industry was on the verge of collapse and we stepped in," Obama told Frankie Darcell, a radio host at 92.3 (WMXD) in Detroit that also broadcasts on another station in Philadelphia.

He hailed the state's economic progress, but said Democrats were responsible.

"The state is coming back and we've got to continue that progress. The only way we continue that progress is if we have a strong Senate and a strong person in the governor's office in Michigan and Mark Schauer is an outstanding individual. I know him. He is somebody who has fought for us. We now have to have his back — and Gary Peters who is running for Senate — this is a guy who knows what it means to fight for working families."


Looks like Detroiters showing up at polling places in big numbers, according to city clerk. So far turnout is about 40 percent


Multiple #MIGOP sources telling me internal polling has #MIGov "too close to call."

On Nov. 3, 2012, a writer for the Austin Business Journal stated, "There'll be no voting with this job."

Three days later, the journalism industry gurus over at Poynter curated a bevy of reasons from journos and why they don't vote.

And, today, Buzzfeed riled up social media sites with a simple poll: "Should journalists vote in elections?"

For whatever reason, this becomes a buzz topic among the media every election cycle, probably as a way to kill time until election returns start pouring in. It is a dumb question. Of course, journalists should vote. Any ethical argument otherwise is absurd.

Does it open up reporters to accusations of bias? No, reporters will always be accused of being left-leaning commies with an agenda. Is it fair — nay, possible(!) — for a reporter to objectively cover the candidate who won if they didn't vote for them. Yes; any support in favor of that mind-numbing argument is painfully thin. A reporter is a person, and a person will have opinions. They can handle covering a candidate fairly.

UPDATE (4:15 p.m.): Chances are you won't see a better Election Day photo today. Senate Minority Leader Mitch McConnell (R-Kentucky) cast a vote for himself earlier in the day, and, as seen here, was elegantly photo-bombed while doing do. 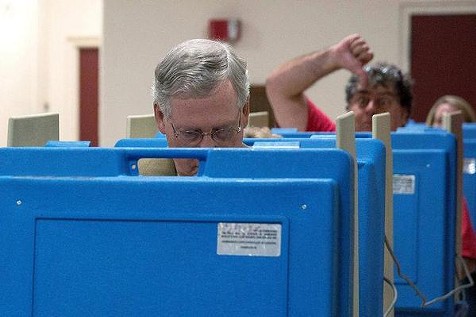 Anyway, this won't make you feel so hot: If the 2014 Midterms are any indication of how often political ads play during commercial breaks on TV and radio, the 2016 presidential election will likely be awful. CNN reports that a station in Grand Rapids, WZZM (ABC affiliate), played more political ads than any other lone station in the country. That proud stat comes courtesy of the Republican research firm Echelon Insights, CNN says. The total number of ads? 1,820, "not counting any last-minute changes."

The sign, oddly, is featured on a lonely stretch of Fort Avenue in Detroit. Feel free to debate how helpful the location was for the sign (there's not much going on around here). But, points for effort: Wayne County is historically a Democratic powerhouse, which Dalton certainly was aware of.

Dalton answered a few questions for us about why he was running back in July.

11 a.m.: This afternoon, we'll head out to the polls and chat with some voters, hopefully bump into some candidates, and wildly gauge what the election results may be.

There's plenty of reasons to vote today: It's a tight race for the governorship, Michigan's wolf hunt will be decided, and voters will select their next state representative and senator. Go vote.

In the meantime, check back later today. And, follow along here later tonight as we'll continue the live-blogging on election returns.