MDOT's electronic signs are a total drag. Let's use them for art instead. 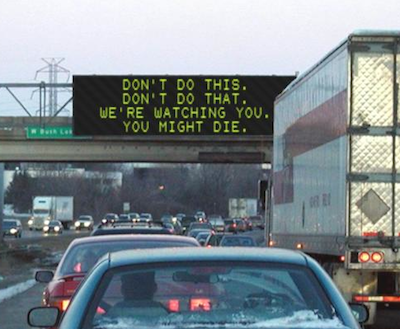 It's a familiar scene. You're driving along the road and it's a beautiful day. Conditions are excellent. There's no precipitation, light traffic, and the sun is shining. It's feels great to be out on the open road. Then, just up ahead, is an electronic message sign that probably cost $1 million to build, and it reads:


All of a sudden, with this grim statistic in mind, the smile slips off your face. Memories of watching Blood on the Highway fill your misty mind, as you think of the mangled families and beheaded picnickers who lost their lives on the roads. Perhaps you have a child in the car, old enough to read but young enough to question why the hell anybody would use a million-dollar medium like electronic signage to deliver such depressing news.

In short, it's a total fucking bummer.

When these electronic signs aren't offering news about how many people have perished on our roads, they're admonishing us about seat belts, "buzzed" driving, and other laws. It's about as charming as a wrathful cop barking reminders in your face. And does it change anybody's habits? We doubt it. Does anybody read an electronic readout that says, "Buzzed driving is drunk driving," and say, "Gee, I just thought I was buzzed, but I really ought to pull over!" The answer is: Hell no.

And what about when the signs show you how long it will take you to get to the junction with another freeway? Is that helpful? Perhaps it was 10 years ago, when few people had smartphones or GPS devices (and probably back when these monstrous and expensive signs were planned), but does it really help anybody to know that they'll be at the exit that's four numbers away from the mile marker in … about four minutes? Again: Hell no.

In short, these electronic signs are an example of just how weighted everything is toward roads and freeways in our backward state. We can't scrape up money for a decent bus system or an actual rapid transit system, but we can gold-plate our freeways with obsolete signs offering information that ranges from useless to depressing.

Here's a novel idea: Why not give this useless real estate to artists? In the 1990s, when most of the grand old theaters on Manhattan's 42nd Street were closed and empty, somebody decided to let artist Jenny Holzer put up phrases on the marquees that were thought-provoking and funny, and probably brought an idea — or at least a smile — to many people's faces. Since we have a similar abundance of outdated real estate, why not let an artist of Holzer's ilk take over these depression-generators. A good candidate would preferably be a local, maybe even the guy at Detroit's Celebrity Car Wash & Detail who's been leaving curious messages on the shop's marquee for years now.


How about some uplifting, intriguing, or just plain amusing messages for our motorists? If nothing is really too good for Michigan drivers, we think this is an idea whose time has come. Here are some examples, thanks to the electronic sign generator at atom.smasher.org/highway.