Lansing to Young Professionals: Go Away

Imagine if Michigan were a product. Now imagine that your product doesn't appeal to the most important, most coveted market segment out there: young, energetic, educated professionals. Naturally, you'd want to put together a team that makes your product, the Great Lakes State, irresistible to that demographic everybody agrees you lack.

If that were the case, you simply couldn't put together a worse marketing team than the people pushing legislation through in Lansing. In almost every instance, they're passing legislation that says to young people: "We don't want you here."

That's right: The up-and-coming generation that's reinvigorating cities across the country are being given the bum's rush by our business leaders.

Millennials love cities. Lansing strips them of revenue-sharing and sics emergency managers on them.

Millennials support gay marriage 3 to 1: Lansing not only quashes gay marriage but pushes through legislation aimed at allowing anti-gay bigots to legally discriminate.

Millennials support a woman's right to choose: Lansing passed a law prohibiting insurance companies from selling policies that include abortion coverage as a standard feature.

Millennials overwhelmingly are opposed to the War on Drugs and favor legal marijuana: Lansing pushes through a bill requiring drug testing for welfare recipients (in the lame duck session, no less), even though the measure has been shown to end up costing more money than it saves in benefits denied. What's more, Lansing's drug warrior attorney general Bill Schuette is a man NORML national director Allen St. Pierre says "may be most single most anti-marijuana attorney general in the country.

In other words, if you wanted to attract millennials to the state to reinvigorate its cities, hiring Lansing to do that job would be the worst, most counterproductive, and stupidest thing to do. Lansing just can't stop churning out decisions that young people correctly interpret as a proud and defiant middle finger aimed directly at the sort of young person that our leaders say we desperately need. You couldn't do worse if you posted signs at all Michigan borders saying, "Welcome, young professionals, to Michigan, where we are working to destroy everything you dream of."

So the next time you hear somebody bemoan the flight of young professionals, or read how Michigan's largest city is actually losing young professionals when the average large city is gaining them, don't forget to know where the thanks are due. It's Lansing, where the desires of young people simply aren't considered important at all. 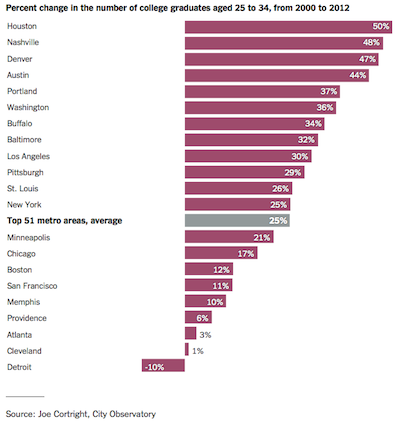