Marking the closure of Michigan Central Station 27 years ago 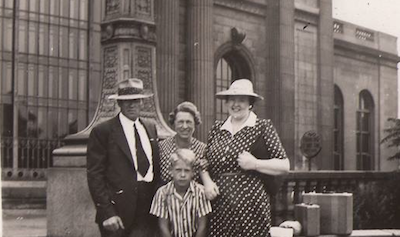 Ever since I first saw it, I have always loved Michigan Central Station. It's a wonderful building, from that awkward era when American architects were pioneering the skyscraper. They could build upward as they never had before, and yet they still hadn't developed the austere language of glass and steel that modernism would impose upon all. Nobody today would build a train station-office building and give it the embellishments of a beaux-arts wonder. Driving downtown along Michigan Avenue, I'd count down the numbered streets until we got to 16th and the building, standing behind Roosevelt Park, would heave into view. Seeing it meant that downtown wasn't far away.

Of course, my family remembered when it was a point of entry and departure for most people coming and going, before the jet age. The building's magnificent front provided a backdrop for countless photos of arriving relatives, as the photo above attests.

When I was 18, and was going down to South Carolina to see one of my high school buddies graduate from Army training, I decided I had to take the train, if only to experience the station. I was surprised how expensive it was, and that it routed me out to Chicago before transferring to a Columbia-bound train. But it was worth it to see the interior, to sit in those long wooden benches under the chandeliers.

Unfortunately, I hadn't realized the station was already closed by July of 1988. (It had closed in January of that year, as a Detroit Free Press piece by Dan Austin pointed out yesterday.) I arrived at the building to find it fenced off, and had to instead ascend to the embankment atop the west side of Vernor Highway, where an Amshack had been set up. It was terribly disappointing. Instead of marveling at the ornate architecture of the 1910s, I was seated in a plastic chair in a trailer, looking at the Fritos in a vending machine.

Years later, I did manage to get inside the building, but only after it had been roundly trashed by scrappers and taggers. I brought a friend from New York who couldn't believe the massive station lay empty.

Now, of course, it's owned by Moroun, who probably cares more about using it as a pawn in his game to retain his monopoly on cross-river traffic than refurbishing it for use. For years, it has been dismissed and degraded by Detroit leaders as an "eyesore." The only thing to save it is that it would probably cost an astronomical amount of money to demolish. (Buildings of the 1910s have a reputation for being ferociously overengineered.) That and the tendency of Hollywood directors to see something remarkable in it, appreciating it as if it were a readymade setting for a Tim Burton Batman film.

But maybe enough time has gone by where we can appreciate the building for what it is: a remarkable relic of the skyscraper's "teenage years," a bridge between the 19th century's "city beautiful" and the sleek era of modernism. Certainly, it provides a focal point for Corktown, which revolves around it. We hate to repeat ourselves, but our buddy, wine blogger Putnam Weekley, once told us how he feels about the building, and it bears repeating: “I meet so-called enlightened people who say, ‘We should bomb that place and raze it to the ground.’ And I’m like, ‘Well, what are you going to replace it with?’ I kinda like the economy that’s built up around the train station. I mean, my whole life revolves around the train station. I’ve got my bank, the place I work, the grocery store, my house, my bar. It just circles me, and it’s beautiful.”

We couldn't agree more. Here's hoping the building sees some new purpose one day, carrying forward a bit of Detroit's past into the future