Detroit's tent cities, then and now 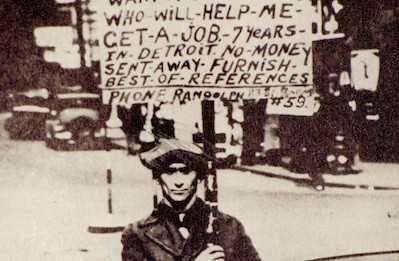 With President Obama lifting several restrictions on travel to Cuba, I've been thinking a lot about Cuba lately. For years, when Americans would travel to Cuba, it would often be under the sponsorship of guides sympathetic to the Castro government. Journalists, professors, and scholars would get a special tour highlighting the successes of the people's revolution, showing them just how great things were in Cuba. Of course, their handlers would be careful to steer them clear of any of the drawbacks of that glorious revolution, and many a credulous observer didn't question how sunny the whole tour was.

I learned of this as early as junior high, from a high school teacher who pointed out that our social studies textbook has a pretty depressing picture of Moscow, with people standing in a long line. He said to us, "That doesn't look very favorable, does it. Then again, a textbook in Moscow showing Washington, D.C., would show a slum with the Washington Monument in the background. So you've got to take this with a grain of salt." It was a good little speech, teaching us a little critical thinking, that maybe perceptions are so carefully managed that you can't break a city or a culture down into one pat image that tells the whole story.

That said, it doesn't mean that people don't try to manage perceptions. That's something worth keeping in mind as the world press descends on Detroit to cover the North American International Auto Show. We can expect a special effort to guide these journalists to the more flattering settings Detroit has to offer this year, and an effort to sweep some of the city's perpetual problems under the rug.

Take the relocation of that "tent city" that had been up for several months. The dozen homeless people who'd been sleeping out of doors since before autumn has finally been convinced to break camp and enter the traditional system designed to keep them warm and fed through the winter. Is it any coincidence that this happens just as the media is about to arrive for the big car show?

Mayor Mike Duggan sounded chagrined by the tent city in a quote to Fox News. After taking a tour of the city's homeless service organizations (there's that "guided tour of Cuba" theme again), Duggan said, "I've been impressed. They've showed me semi-private rooms and private apartments. I've met people in various stages of transition. There is a lot of good work being done by the homeless service organizations in this town that's been discredited by these tents — and that's unfortunate."

See? There isn't anything wrong with Detroit's glorious renaissance. These people who are out in tents in subfreezing temperatures are the problem — or at least their tents are.

Why are they risking their lives rather than enter this wonderful system? That's where even the most sympathetic news stories become vague. Speaking to WXYZ-TV, City Councilmember Mary Sheffield said, ""I think they are making a statement by staying outside in freezing temperatures when they've been offered areas to sleep. There are issues regarding Detroit's homeless problem that have not been addressed, and I want to begin that dialogue."

That dialogue, involving accusations that shelters can offer accommodations so undesirable that some find sleeping out in the snow preferable, will have to wait — at least until Jan. 26. Probably longer.

The good news is, by all accounts, the mayor of "Tinsel Town," Stephon "C.J." Jones, got the goods for his group, who is now staying at hotel rooms with the promise of a permanent building.

But as "win-win" as the narrative of a homeless camp getting promised housing just before the auto show is still more complicated. Detroit has a long history of people living right on the edge of poverty, one in which this story offers a look at the continuity of that problem than its solution.

That problem was evident as many as 80 years ago, in the wake of a crash that wiped out the accumulated savings of a working glass that was left jobless and unable to pay the bills. Take a look at this screed from labor organizers Walter and Victor Reuther in the 1930s. They certainly describe a Detroit that "tour guides" from the 1930s would find themselves eager to avoid.

As glittering new automobiles costing tens of thousands of dollars go on display, and the city's leaders are eager to show off their miraculous comeback city, Detroit's homeless will simply have to become less visible for a while. But, as the historical evidence shows, the problem won't be going anywhere soon.