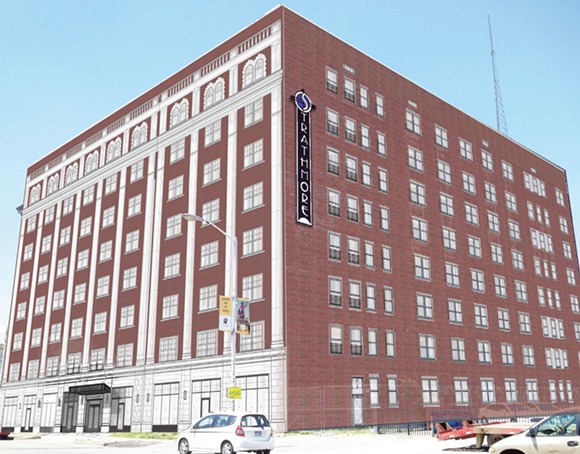 For the last decade, the dilapidated Strathmore Hotel at 70 W. Alexandrine near Wayne State University has sat vacant, exposed to the elements, and appeared to be a lost cause.

But on a frigid Tuesday, a consortium of groups along with Detroit Mayor Mike Duggan announced that $28 million in financing has been finalized to redevelop the historic Strathmore into 129 market- rate and affordable units in Detroit's still-growing-at-lighting-speed Midtown district. An additional 2,000 square feet of ground-floor commercial space will also be constructed. 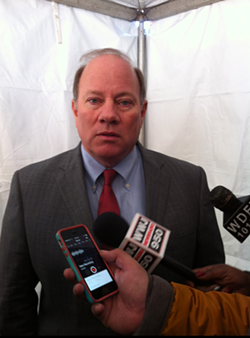 To the sounds of jackhammers working on the construction of the 3.3-mile M-1 Rail streetcar, Duggan recalled the shape of the Strathmore he saw back in 2002 while serving as Wayne County sheriff. At the time, the mayor said, the Children's Center, located across the street, asked Duggan to visit and observe the site — an area he said appeared to be "controlled" by prostitutes and drug dealers.

"As I watch this, I'm not going to forget the days I saw the drug dealers and prostitutes on the corner like they owned the block," Duggan said Tuesday after praising the new project.

About 40 percent of the Strathmore's apartments will be offered at affordable housing rates, project backers said Tuesday, a point Duggan stressed after the press conference.

"As we rebuild this city, we're gonna make sure the housing is available to everyone," Duggan said. The mayor told reporters he would like to see future housing developments in Detroit commit at least 20 percent of its rental units for low- to moderate-income residents at affordable rates — if the projects include city money.

The eight-story Strathmore first opened as a hotel in 1929, which it existed as until 1964, when it was then renovated into 187 apartment units. The building remained occupied as such until 2004, when it was closed.

Sue Mosey, president of Midtown Detroit Inc., said at least four developers have taken a whack at the project in recent years, but all have fallen short of landing the necessary financing to make it a reality. The project, she said, is a "bigger part" of what her nonprofit wants to do with the Midtown district.

"We want all folks to feel welcome in Midtown," said Mosey, adding she wants to continue attracting developments that include a mix of affordable- and market-rate housing.

The project has been a "multi-year endeavor," said Sonya Delley, senior vice president at Invest Detroit.

"Demand is outpacing supply in this community, that's not going unrealized," Delley said, adding the Strathmore will "address the needs of many."