Duggan to deliver State of the City address Feb. 10 inside the Redford Theatre 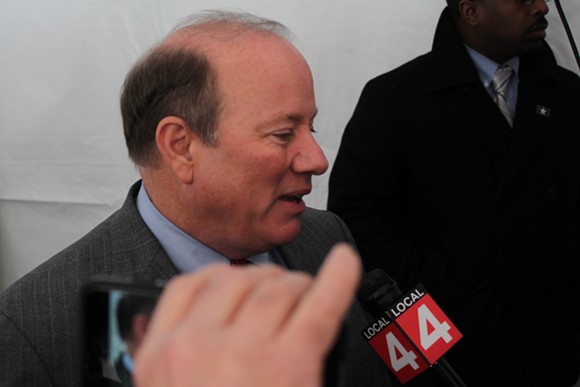 Entering his second year of office, now without a state-appointed emergency manager, Detroit Mayor Mike Duggan will roll out his vision for the city in 2015 during his State of the City Address on Feb. 10.

Last year, Duggan delivered his first State of the City speech just weeks after taking office, following an uphill battle that involved an intense write-in campaign. With only a set of plans and a vision for the year ahead, Duggan's speech was met with fawning optimism by the local commentariat. (At times, it felt like the gummy descriptor of Duggan as a "turnaround specialist" would never be shelved.)

But now, with former Emergency Manager Kevyn Orr out of the picture (and a state-appointed commission to oversee large city decisions installed in his place), the speech marks a turn in Duggan's tenure: What will, or can, the guy accomplish without Orr around?

The typically-upbeat speech (unless you're a peeved Kwame Kilpatrick) will be held inside the beautiful Redford Theatre at 17360 Lahser, located on Detroit's northwest side. The speech will begin at 7 p.m.

The city says the speech will be broadcasted on Channel 10 in Detroit, and a live-stream will roll at detroitmi.gov.